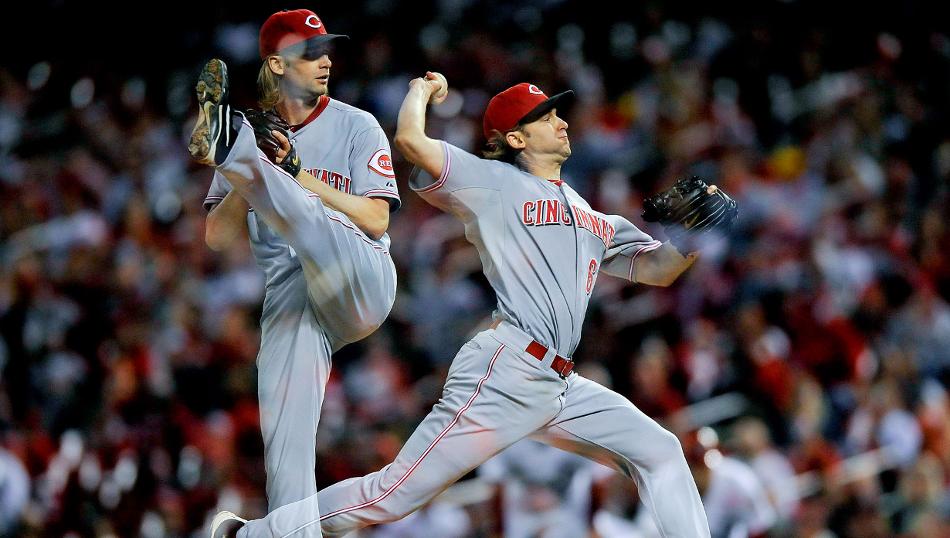 Bronson Arroyo is probably your mother’s favorite baseball player. He has those long luscious locks that swish just so when he follows through.Ã‚Â His leg kick defies convention just enough while still vaguely resembling the iconic Rockettes. And of course, he plays the guitar when he’s not taking the field. Bronson Arroyo is a bad boy without being aÃ‚Â badÃ‚Â boy–the guy brought home for Thanksgiving that Dad thinks isn’t good enough to be with his daughter but Mom defends because she just needs some adventure in her life.

Bronson Arroyo is also my mom’s favorite baseball player so there’s that.

Back in September, the Enquirer’s Zach Buchanan wrote that Arroyo may be making one more comeback attempt following a litany of health concerns that have sidelined him sinceÃ‚Â June of 2014. While Bronson’s recovered health is all fine and dandy, it’s not exactly relevant to the Reds current prospects, EXCEPT:

He thinks two former clubs Ã¢â‚¬â€œ the Reds and the Diamondbacks Ã¢â‚¬â€œ might make sense. Both have underperforming young pitchers who could benefit from ArroyoÃ¢â‚¬â„¢s expertise, even if he doesnÃ¢â‚¬â„¢t make it out of camp.

BRONSON ARROYO MIGHT RETURN TO THE REDS. Yet, the article was written in September, far too early to forecast any free agent signings, and consisted mostly of empty speculation. Oh Zach Buchanan, you tease me.

But then, just a week ago today, buried at the bottom of a Billy Hamilton-might-be-traded (-to-the-Rangers) column by Mark Sheldon, was this wonderful quote:

Not ruled out is a reunion with former Reds pitcher Bronson Arroyo, who has not pitched since 2014 because of elbow and shoulder injuries…

“We’ve talked to him,” Williams said. “I don’t know to handicap the odds. He would have to get healthy. I know Bryan [Price, the Reds manager] has a good relationship with him so we’d have to consider him.”

May I repeat, BRONSON ARROYO MIGHT RETURN TO THE REDS. If thatÃ‚Â isn’t a Christmas miracle, I don’t know what else could possibly qualify.

Looking at the Reds projected rotation–Homer Bailey, Anthony DeSclafani, Brandon Finnegan, and some combination of Dan Straily, Cody Reed, Robert Stephenson, or Amir Garrett–there’s not a lot of room left toÃ‚Â maneuver. General Manager Dick Williams’ comment that the Reds would be looking for a fifth starter this offseason didn’t really make sense at the time and still doesn’t considering the Reds have seven starters (plus one Tim Adleman) already.

But, if you imagineÃ‚Â that Straily goes to the pen and Stephenson and Garrett start in AAA, then suddenly there’s an Arroyo-sized hole just waiting to be filled. What team doesn’t need a cagey vet projected to earn 0.0 WAR tossing some accelerated BP every fifth day? Yes, contending teams don’t need that, but the Reds aren’t contending in 2017 so it’s a moot point.

What I’m trying to say is: If the Reds are so hellbent on spending unnecessary money on a veteran, fifth-day starter thereby further stunting the growth of their much-delayed young pitchers, then all I ask of Dick WilliamsÃ‚Â is to make that choiceÃ‚Â somewhat amusing. Bronson Arroyo is the palate-cleanser to this 1-star Yelp reviewed rebuild.

But, if Bronson’s patchwork arm isn’t your definition of amusing, here are a few other pitchers who might not make sense in the rebuilding process, but would certainly make it much more enjoyable than it has been.

Big Time Timmy Jim has 100 percent lost the ability to throw a baseball at a major league level, but because he has always been the Coke Zero to Bronson’s Classic Coke, he needs to be on this list. On the bright side, there’s no way he can pitch worse than a 9.16 ERA right?

Really, Mat Latos is only being considered because watching him pout for three weeks before he would inevitably beÃ‚Â cut at the end of April would be the most satisfying vengeance. Also, Homer Bailey would throw a punch at some point. I’m pretty certain about that one.

Disregard that Bartolo Colon has already signed a contract with the Braves, we can still sign him. I don’t know howÃ‚Â it canÃ‚Â happen, but just think: Bryan Price would be forced to bat Bartolo somewhere other than ninth because he couldn’t have the lumbering pitcher in front of Billy Hamilton. Which, if you haven’t figured it out yet, means the maximum number ofÃ‚Â Bartolo Colon plate appearances. Someone find a lawyer; we need to find a loophole in Bartolo’s contract. Batting eighth is his destiny.