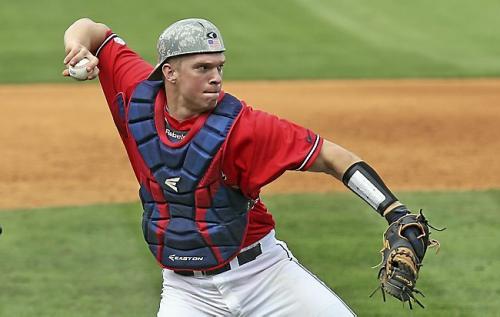 The Reds selected a pair of catchers in the Major League phase of the Rule 5 Draft on Thursday morning as the 2016 Winter Meetings came to a close.

Cincinnati took Luis Torrens from the Yankees with the second pick of the first round, and Stuart Turner was selected in the second round from the Twins’ organization. Torrens, whom MLBPipeline.com ranked as the 17th-best prospect in the Yankees’ system, was dealt on Thursday night to the Padres for a player to be named and cash.

Okay, just one new catcher added to the organization: Stuart Turner. But he has a couple of connections with former Reds catchers, which is fun.

Turner was drafted in the third round in 2013 out of Ole Miss (alma mater of Zack Cozart). While at Ole Miss, Turner won the Johnny Bench Award, as the best catcher in college baseball.* (Here’s video of Turner accepting the award, along with a good interview, which includes stories about Turner getting to meet Bench for the first time.)

*Johnny Bench was a great catcher, no doubt, but it’s a little odd that the award for top college catcher is named after Bench. After all, Bench never played college baseball, though he did try out for Oklahoma State as a high school senior. OSU declined to offer him a scholarship, and Bench was later drafted in the second round of the first MLB draft.

After being drafted, Turner was assigned to play Rookie ball at Elizabethton. The hitting coach at Elizabethton? Former Red (and member of the 1990 World Series champs) Jeff Reed. Turner gives Reed credit for helping him develop as a professional:

He said, Ã¢â‚¬Å“IÃ¢â‚¬â„¢ve been blessed to be with catchers my whole life. My high school coach was a catcher. In college, at Ole Miss, the three coaches (head coach and two assistants) were all catchers. Then to get to my first pro team (Elizabethton) and have Jeff Reed who was a 17 year catcher in the big leagues. ItÃ¢â‚¬â„¢s kind of like, God continues to bless me and put me in the right places and lead me the right way. IÃ¢â‚¬â„¢m just very thankful for that. Reed did a wonderful job with hitters. At Instructs was when I got the most catching coaching from him because he was able to specifically work with the catchers. He was tremendous at what he did.Ã¢â‚¬Â

Turner will turn 25 later this month. A very highly-regarded defensive catcher, he entered the 2016 season ranked as the Twins’ #18 prospect (by MLB.com) and #14 by John Sickels. His glove has to be great, because Turner isn’t much of a hitter. At Double-A Chattanooga this year, he hit just .239/.322/.363 with 6 home runs.

Mostly, seems like Turner will be depth at the catcher’s position, profiling as a backup, if needed:

“He’s a good defensive catcher,” said Reds assistant GM Nick Krall. “We liked him out of college when he was drafted. He’ll be a good complement on the roster if something happened. He’s just a good depth catcher, a decent prospect as well. He’s close to being Major League ready.”

The Reds are prepared to carry three catchers on their big league roster, if needed, according to Williams. Primary catcher Devin Mesoraco has been injured for most of the past two seasons and Tucker Barnhart is the No. 2 catcher, but capable of playing every day.

“The plan was to add catching so we’d have a contingency plan,” Williams said of the Rule 5 strategy.

Turner will be in the mix to be the third catcher on the Reds roster. (A discussion about the intelligence of using three roster spots on catchers will be forthcoming as spring training approaches.) An odd note: Turner — like Reds left fielder Adam Duvall — has type 1 diabetes.

So, Turner is interesting, but there was some really good news about the Rule 5 draft, as Doug Gray noted:

Perhaps the best news of it all, though, is that the organization didnÃ¢â‚¬â„¢t lose a single player in the Rule 5 draft Ã¢â‚¬â€œ at least at the Major League phase. It seemed that the team was taking a gamble with multiple players, but everything worked out for them in who they chose to add to the 40-man roster and who they chose to take a chance with by leaving them off of the roster.

I really thought the Reds would probably lose Ismael Guillon, a left-handed reliever who played at Single-A Daytona last year. Guillon — signed in 2008 as a 16-year-old — has a live arm and could be a useful pitcher at some point. So the fact that Cincinnati didn’t lose anyone is nice, and an indication that the roster decisions made in the run-up to the Rule 5 draft were justified.

In three years, I may look back at this post and realize that everything written here is irrelevant and none of these guys ever made any kind of impact on the big league level. Or maybe the transactions today will be key to the next good Reds team. Welcome to baseball writing.