Last week, I covered the first early 2017 Reds hitting projections. This week, we will take a look at the 2017 Reds pitching projections from Steamer. As a reminder, one of the more popular projection systems, ZiPS is still likely a few weeks out (they were released on December 11th last season for the Reds). ZiPS is typically known as more reliable, while Steamer is typically more pessimistic. So take these for what they are. 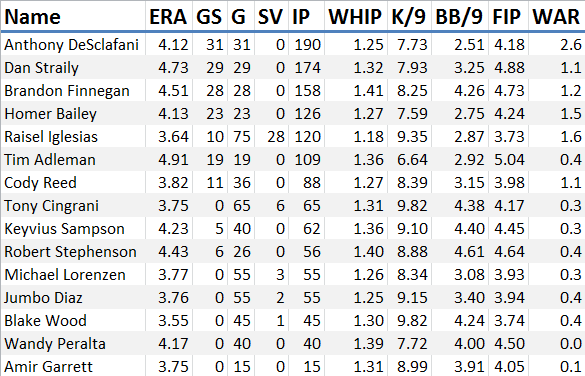 Anthony DeSclafaniÃ‚Â andÃ‚Â Homer BaileyÃ‚Â lead the way in fWAR among SP, but both pitchers have just slightly above average ERA’s and FIP’s. The biggest surprise is thatÃ‚Â Cody ReedÃ‚Â leads the way among SP (if you exclude Iglesias) in both ERA (3.82) and FIP (3.98).

The most encouraging thing is the bullpen projections. If Iglesias is the closer, that makes the pen even better. Cingrani, Lorenzen, Diaz, and Wood all have ERA’s below 3.76, and all have high strikeout numbers.

It will however be a very long season if Tim Adleman actually makes 19 starts.