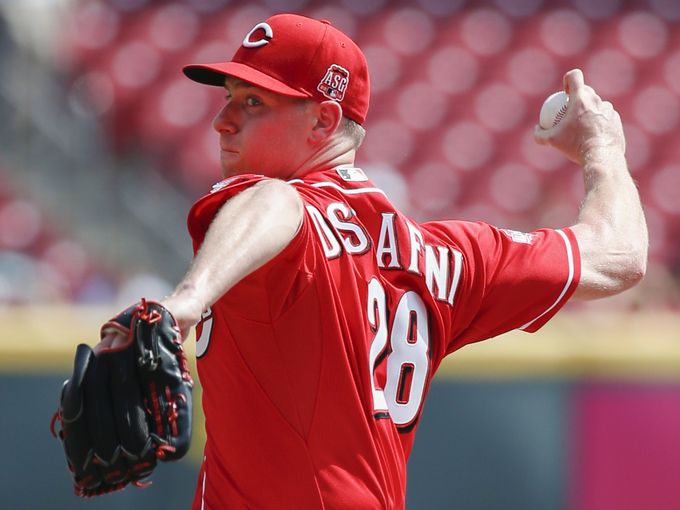 No. The answer is no.

This morning, I received a question on Twitter, asking if I thought the Reds should consider trading starting pitcher Anthony DeSclafani. Here was my reply:

No player is untouchable, but trading away a talented 26 y/o pitcher at this point in the rebuild cycle seems like a bad idea. #Reds https://t.co/DHHS9qF85Y

Then, I saw this piece by Anthony Castrovince over at MLB.com on nine “players under 27 who could be traded.” On that list was…you guessed it:

He qualifies for this list by the slimmest of margins, because he’ll turn 27 two weeks into the ’17 campaign, but, with just 341 innings under his belt, DeSclafani is certainly a young’un.

I include DeSclafani here not because the Reds have an eye on moving him. Quite the contrary, in fact. But with the starting pitching free-agent market as thin as it is, we can’t rule out the possibility of a team, much like the D-backs with Shelby Miller a year ago, getting drunk off DeSclafani’s ’16 breakout (130 ERA+, 3.28 ERA in 20 starts) and cost control (he’s not eligible for free agency until after 2020) and making the still-rebuilding Reds an offer they simply can’t refuse.

I clicked on that piece expecting to be irritated. No, the Reds shouldn’t trade Disco! The Reds are looking to compete within the next two or three years. Number 2 starters who are still 26 years old are supposed to be the building blocks of a “rebuilding” organization. Sure, the Reds have traded a bunch of assets over the last 18 months in the name of restocking the cupboard. But at some point, the unloading of players has to stop, right? The Reds are supposedly at the point in the rebuilding cycle where they can look to fill holes, not just dump salaries and try to get prospects in return.

So yeah, I clicked on that link prepared to be mildly annoyed at what I was reading. But, lo and behold, Castrovince is actually correct. Well, he’s correct to the extent that he’s saying Disco could be an attractive piece for teams that expect to contend, and the Reds should consider trading him under certain circumstances.

I’ve long suggested that no player on any Reds team should ever be considered “untouchable” in trade talks. That’s the case with DeSclafani. If someone wants to break their bank and wildly overpay for Disco, the Reds should take them up on it. Castrovince mentioned the Shelby Miller deal between Arizona and Atlanta. Yes, please, sign me up for a return like that.

However, the reasons that Castrovince lists as to why Disco would be so attractive to other teams — established #2 starter who is under team control for the next four seasons — are precisely why he’s such a perfect fit for the Reds, a team trying to turn the corner on their rebuilding process. Cincinnati management has stated publicly that they expect the club to be “competitive” (whatever that means) by 2018. If they truly believe that — and there’s reason for optimism on that point, I would say — then Anthony DeSclafani should be one of the last players they consider trading.

Disco isn’t untouchable. No one is. But the Reds should demand an overwhelming return from another club before accepting any potential trade. Unless someone is willing to surrender serious value in return*, DeSclafani is probably more valuable starting every five days for a club that is (hopefully) on the rise.

*And it doesn’t necessarily have to be a Shelby Miller-like return — a shortstop who was drafted #1 overall last year, a Gold Glove center fielder, and a good pitching prospect. After all, there was probably only one General Manager in baseball who would have traded all that talent in exchange for a mediocre pitcher, and Dave Stewart is now unemployed.