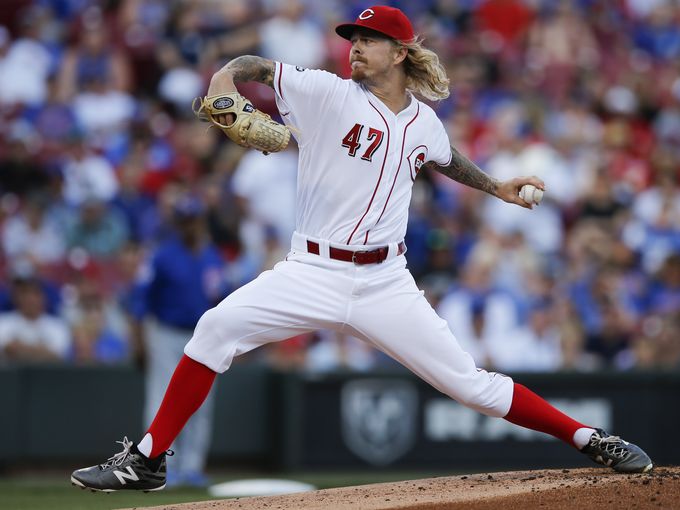 So long, John Lamb. We barely knew you.

The Cincinnati Reds have traded Lamb to the Tampa Bay Rays in exchange for a player named Cash Considerations. I can’t find any information on him, but he must be good if the Reds gave up Lamb for him.

As for Lamb, I was hoping to see if he could develop into a credible big league pitcher, most likely in the bullpen. Unfortunately, he’s had a run of bad luck and bad performance:

The 26-year-old Lamb was one of three left-handers that the Reds acquired from the Royals in 2015Ã¢â‚¬â„¢s Johnny Cueto blockbuster. Once touted as one of the top 20 prospects in all of baseball by both Baseball America and Baseball Prospectus, LambÃ¢â‚¬â„¢s stock has dropped precipitously over the years due to multiple injuries. In addition to the two back surgeries to repair herniated disks, Lamb also underwent Tommy John surgery as a minor leaguer and missed nearly two full seasons as a result. HeÃ¢â‚¬â„¢s pitched with the Reds in each of the past two seasons but has struggled in the Majors, posting a combined 6.17 ERA with 8.7 K/9 against 3.8 BB/9 in 119 2/3 innings.

You never like to give up on lefties with potential, but the Reds ran into a roster crunch that ultimately ended with Lamb being designated for assignment. Losing Lamb is tough for us here at Redleg Nation, and not because I think he’s going to be a great big leaguer — I wouldn’t bet the ranch on that. But we’ll really miss all the dumb jokes about Lamb’s yellow Trans Am and his REO Speedwagon t-shirts.

News of the trade brought a predictable reaction on Twitter:

I'm glad we just have Cueto away for basically nothing. #Reds https://t.co/J5GtFdhmfl

The Reds “gave away” Johnny Cueto for Lamb, Brandon Finnegan, and Cody Reed. Finnegan made great strides in his first full season as a starter. While Cody Reed struggled in the big leagues as a rookie, he dominated in the minors and remains one of the top prospects in the Reds organization. Both are 23 years old.

In exchange for those guys, the Royals got half a season of Cueto. That’s it.

We can argue all day about whether the Reds should have broken the bank to sign Cueto to another contract extension, rather than dealing him away. I’m as sentimental as the next guy, and I wish Cueto were still a Red. I’ll listen to that argument (even if I don’t agree with it). But don’t act like the Reds got fleeced in the Cueto trade. From where I stand, it looks like the Reds got pretty good value in return.

With or without John Lamb.