Adam Duvall had a heck of 2016 season. He hit 33 home runs in his first full season, was named to the NL All-Star team, and put on a good showing when he competed in the home run derby. Duvall of course was only the throw-in piece when the Reds traded just eight starts of Mike Leake at the 2015 trade deadline. 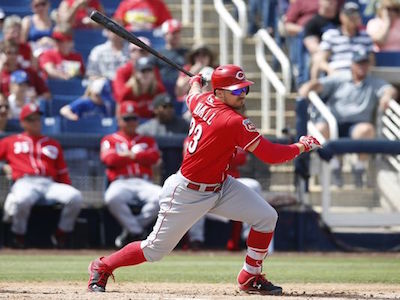 There has been much written about Duvall. There are many that think the Reds shouldn’t count on him as a main contributor on the Reds next contender. There are legitimate concerns about Duvall. While I am not sure if he will be the next superstar, I think he can be a solid contributor. Here is why:

2) Duvall’s defense is actually really, really good in LF. All reports were that Adam Duvall was a pretty bad defensive third baseman, which is where he spent the majority of his time in the minors. This season in the outfield (mostly LF, but some RF), Duvall had 14 Defensive Runs Saved (DRS), which is only 1 less than Billy Hamilton (gasp). Duvall ranked 8th in DRS out of the 54 qualifiers. Duvall also ranked 8th in UZR/150 among OF at 10.4.

4) The walk rate got better as the year went on. When Adam Duvall had his best month of 2016 in May, he has a scary low 1.9 BB%. Duvall hit 11 bombs in May, and pretty much all of his production came from home runs. As the year went on, the home runs slowed down, but the walk rate went drastically up. In June it was 5.9%, in July it was 9.5%, in August it was 9.8%, and in September it was 7.3%. Obviously for Duvall, it would be nice if he could keep the BB% around league average (8.3%), while still hitting lots of homers. 2016 was literally his first full season in the big leagues, so he has room to grow.

5) Duvall is 28, not 38. I’ve seen a lot said about Duvall’s age. Sure, at 28 most players start to decline, but a player at 28 should still have several good years before they fall off the cliff. The Reds aren’t signing Duvall to 10 year deal, and only need him to be productive for a couple years. Duvall is under a team control until 2022, so the Reds have a 30 home run player for dirt cheap.

So again….Adam Duvall may not be a superstar in the making, but I’ll take a guy anytime that can hit 30 home runs and play good defense. And if he can find a way to keep his BB% rate up while still hitting bombs, watch out.