So baseball is broken, but I’m not going to be one of those people who just sees a problem and whines and complains about the problem but refuses to do anything about it. No, I’m a man of action.Ã‚Â Checks dictionary to make sure that writing blog posts can be considered action. Okay I’m a man of ineffective action, good enough.

Now, imagine a field–it can be any type of field but the grass must be green. Imagine the stands around it. Go for the friendly confines atmosphere–a field that Vin Scully would describe as having character, you know a field you could grab a beer with and just listen to it tell the stories of its day.

Imagine gray, rolling clouds with edges tinged by silver light above this field. There is no wind, no heat, no cold. The world around you is the temperature of your body but still the air isn’t stagnant, its charge sings your body electric. Got the picture? Imagine some very fit men running around on the field if that helps you put it in perspective.

This is where I was this summer, watching Fulham F.C. play Crystal Palace in a preseason football (i.e. soccer) match on the historic Craven Cottage pitch. Fulham took the game 3-1 despite having been relegated to the Championship League, the second highest division in English soccer (think AAA), in 2014 while Crystal Palace still plays in the Premiere League. Do you see where this is going yet?

Baseball is broken and the only way for us to fix it is to turn to our forefathers across the pond. Just as we built on the English parliamentary foundation to create American democracy–a beacon on a hill, if you will–we must build on the national English sport to reshapeÃ‚Â the American pastime. And so, in the name of country, sport, and making the Reds good again, I submit a modest proposal to adopt a system of promotion and relegation into Major League Baseball.

First things first, what is relegation?

Relegation is a system put in place in a sports league that spans different levels of competition where after each season, the top two or three finishing teams are promoted to the next level up and the bottom two or three finishing teams are demoted to next level down. For example, the Reds and the Twins would have been demoted to AAA after this season due to their performance.

Baseball already operates on a pseudo-relegation system, but it’s one involving the players and not the teams. The farm system model that is currently used promotes or demotes players based on performance, theoretically keeping the uppermost levels operating as best as they can.

Because ofÃ‚Â this relegation-by-individual system, an undue amount of autonomy is stripped from the players and given to the owners and teams can be incentivized to horde promising players in their farm systems to make a run in a different season (a la Houston Astros).

So how would relegation fix baseball? Well, for one it would (theoretically) create more parity amongst teams, thinning the gap between the rich and the poor, and two, it would make the sport more competitive by raising the stakes and spread that competition to the far corners of the country through the established minor league system.

Okay, okay–I sense you’re sitting there thinking to yourself “We don’t need the English coming in telling us how to make our sport better. It’s perfectly fine already.” Which is true, I can’t really argue with that, but stick with me for a minute.

The argument for relegation in the MLB is always based off of having the already existing infrastructure, but very few people imagine past that. Shifting Minor League teams around and making Major League teams fight for their dignity is fun and all, but thought experiments are better when diagrammed to nth degree,Ã‚Â so how exactly would relegation work?

For one, every team’s roster would have to be cut to 35 players–25 active and 10 inactive for every game to be decided at some set point before game time. That way, teams have some leeway with injured players (no DL, they just go inactive) and more bench players or relievers can be carried for any given game because roster spots won’t have to go to starters. To get to this 35 man rule, Major League teams would be allowed to keep up to any 35 players in their organization under their current contract, releasing all of the rest to be signed by any team. This would create an initial free agent market of Major League caliber players that could sign with Minor League teams if they so chose.

Teams would have to follow different strategies, not really being able to hoard prospects because that could lead to the team tanking and being relegated. So would the Reds hang onto Nick Senzel or Amir Garrett at the expense of a player who could produce sooner? Or would they let both go to a smaller team looking to fight its way up?

As to the argument that the Major League teams would always be better than the minor league teams, well there’s only so many roster spots. Inevitably, free agents will sign with minor league teams closer to their hometowns, ones that can offer more money (the prospect of promoting yourself to the top shouldÃ‚Â be enough incentive for new billionaire owners to fund these teams), or ones that they feel they can redeem. Athletes love to win, but athletes love to be legendary even more and what better way than to become a legend than to take a team from AA to the World Series?

As for how relegation would work specifically, let’s take this year as an example. As the two worst teams, the Reds and Twins would be relegated to AAA for the 2017 season. But who would come up? The way the Minor Leagues are structured is not entirely intuitive, so we’ll have to make some generalizations to make sense of it. For reference, here is the Minor League table as laid out on the Minor League Baseball website: 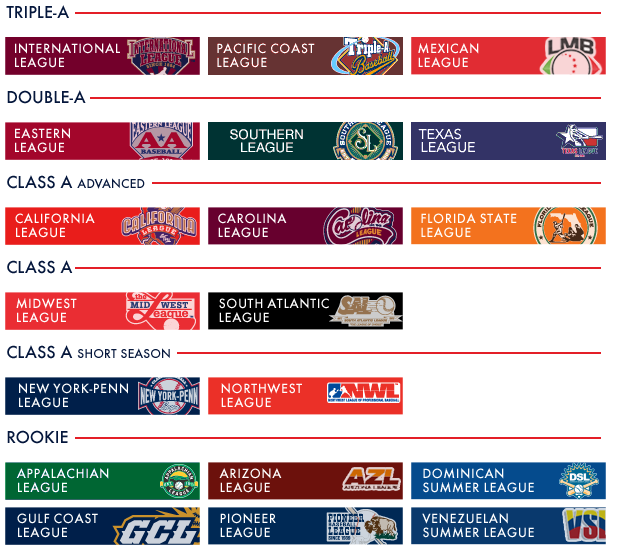 So what happens now is that the winner of the Pacific Coast League and the International League play each other for the AAA Championship and two Mexican League teams play each other for that championship. Because I only have two teams being relegated, only two teams will be promoted (citation: logic). To modify the English system a bit (which automatically promotes the top two finishers and has a four-team playoff for the third spot), one promotion will automatically go to the best regular season record in either the PCL or the International League and the second will go to the winner of the AAA championship at the end of the playoffs. This year, the Scranton/Wilkes-Barre RailRiders had the best regular season record and won the AAA Championship. Thus, they were automatically promoted and their opponent in the Championship, the El Paso Chihuahuas, would take the other spot.

Going down the line,Ã‚Â the two bottom finishers in the PCL and International will be relegated to the Mexican League and Eastern League respectively, with the champions of those leagues taking their places. Southern and Texas will promote to the Mexican and Eastern and relegate to the California and Carolina. So on and so forth with each league below AAA promoting one team and relegating one team each season.

Because the Minor Leagues are so dependent on geography, this system could be catastrophic financially due to potential travel costs incurred. Which is a fair critique, BUT if each Minor League team is independently owned as would be the case for this system to work, the teams themselves would have more budget to travel than they do now. So in theory, it’s a moot point.

Obviously, the point of instituting relegation is to prevent teams from tanking like the Reds did through September because who wants to watch that? Just as adding another Wild Card made the end of the season can’t-miss chaos, incentivizing bottom-feeders to play hard against the best of the best would make September/October baseball all the more exciting. Also, think of a trans-league trade deadline. You think deals for the future make exciting news now, just think of a deal where a team in AA wants to get promoted and a team in the MLB is sitting middle of the pack. It would be uproarious.

And if noneÃ‚Â of those arguments work for you, just think of where the Cubs would be right now if there was relegation. Probably still in A-ball, maybe even the Fall League. None of this World Series contender BS. And if there’s ever a better argument for something than prolonging the suffering of Cubs fans, I’ve yet to hear it.

Vote Relegation 2016. Keep the Cubs away from our trophy. It’s what Abner would want.