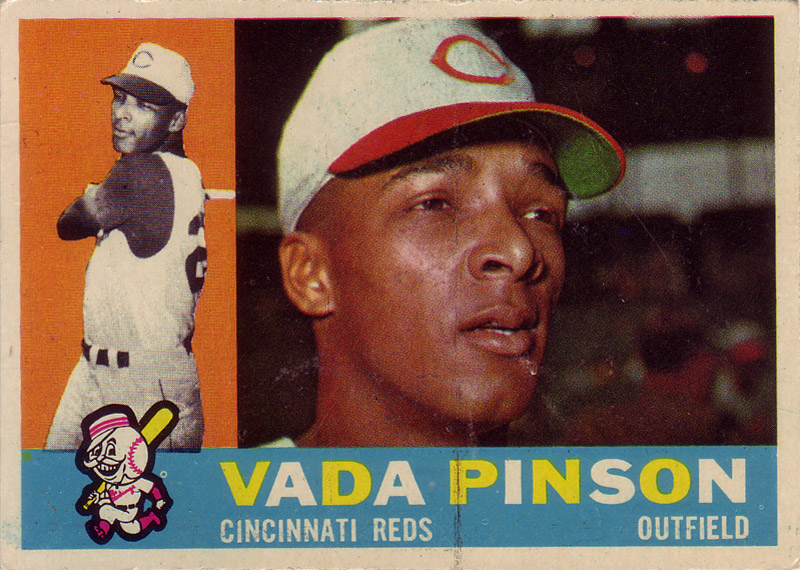 Over the years, I’ve been pretty fortunate to interview a number of Cincinnati Reds. Since our miserable 2016 season is over, I thought it would be a good time to recap some of the more interesting ones and share them with the Nation.

Like Chad and Steve have said, we need some cheering up. So sit back, relax and try to enjoy. Although I must say I was glad to see Travis Wood hit that home run the other night. Man, did we get fleeced on that trade!

Some time ago, I was working on the Galesburg Fire Department and our Fire Chief was trying to acquire some land for a Regional Training Site. Who owned the land?

None other than Marge Schott, owner of the Cincinnati Reds. Her late husband owned a former brick paving site in East Galesburg, Illinois. The Chief knew I was a Reds fan and he had been speaking with Mrs. Schott about purchasing the land. 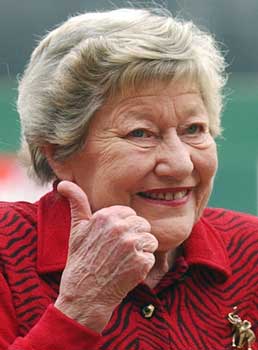 One afternoon, the Chief called me up to his office. He had Marge Schott on the phone and he had told her about me. At that time, I also held a job with a weekly paper in Galesburg as a sports editor. Coincidence had it that Marge was going through Ã¢â‚¬Å“sensitivity trainingÃ¢â‚¬Â mandated by Major League baseball for racial remarks she made about some of the Reds players.

We spoke for thirty minutes. It was 5pm here in Galesburg (6pm EST in Cincinnati) and Marge was in a talkative mood. She did most of the talking. Since our conversation was basically Ã¢â‚¬Å“off the recordÃ¢â‚¬Â I have never divulged in print what she said to me. As far as she knew, Marge was talking to a Reds fan, not a member of the press. I will say this: Marge spent about 15 minutes discussing the training MLB ordered her to take and she wasn’t very happy about it. But during our conversation, she also told me she loved Barry Larkin and Ken Griffey Jr. Ã¢â‚¬Å“They’re Cincinnati guys, honey,Ã¢â‚¬Â she said to me. Marge asked about my family and how I became a Reds fan living here in the hinterlands of Illinois. She was very polite and also very blunt and candid. We had a good chat.

Two years later, I had a press pass and was at Riverfront Stadium taking the elevator down to the clubhouse. As the doors swung open, there was Marge. Ã¢â‚¬Å“Who are you young man,Ã¢â‚¬Â she asked, Ã¢â‚¬Å“and who do you write for?Ã¢â‚¬Â After I explained to her why I was there and who I was going to interview, she got off the elevator and lit up a cigarette. Ã¢â‚¬Å“Enjoy the game honey,Ã¢â‚¬Â she said. Ã¢â‚¬Å“If you have any problems, just let me know.Ã¢â‚¬Â

I interviewed Vada Pinson at Comiskey Park in Chicago when the former Reds center fielder was a coach for the Tigers. The interview centered on his career with the Reds as I did an article about him for a weekly Reds publication in Cincinnati. We sat in the Tigers dugout. Vada hadn’t changed much, physically. He was still lean and quick with a smile. We spoke for 25 minutes and touched on a lot of subjects. He was polite and seemed to enjoy talking about the years he spent with the Reds.

When I spoke of Reds Manager Fred Hutchinson and his battle against cancer during the 1964 season, Pinson lowered his head. I asked Vada how it affected the players: did it galvanize them, did it motivate them more, what was going on in their minds during a heated pennant race? He paused for a moment, his eyes closed. Ã¢â‚¬Å“Hutch,Ã¢â‚¬Â Pinson said, Ã¢â‚¬Å“well he meant a lot to us. You could see what was going on. He lost weight. His right eye was swelling shut. It was hard, just hard.Ã¢â‚¬Â The mere mention of Hutch had obviously brought back emotions for Pinson. And this was 27 years after Fred Hutchinson died.

Vada Pinson would be dead just a few years later.

In October of 1979, I went to the Northgate Bowling Alley in Galesburg. The Reds had been swept by the Pittsburgh Pirates a week before in the playoffs. I bowled a few games with some friends and afterwards, I went to the bar for a beer. There were only a few other people in there, which was fine with me. I looked across the horseshoe shaped bar and there was a guy sitting by himself having a cup of coffee. He looked familiar to me, with a hawk-nose, grayish hair, around 50 or 55 years old. Then it hit me.

Is that John McNamara? It can’t be. What would he be doing here in Galesburg, Illinois?

After I had a beer, I wandered over to where he was. I mean, what could I say? Ã¢â‚¬Å“Are you John McNamara?Ã¢â‚¬Â I asked. 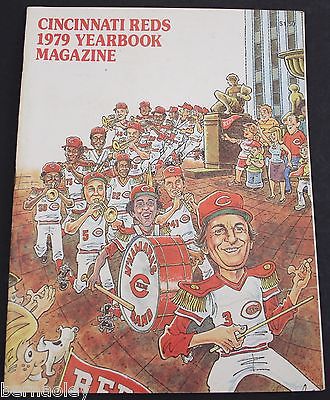 Turns out the Reds manager was on his way to Rock Island to visit relatives. He invited me to sit by him and we spoke for over an hour. Unbothered by fans and unknown to all at the bowling alley, McNamara and I sat and talked baseball. He was gracious and seemed to enjoy our conversation. I live five minutes from Northgate so before we finished, I asked if I could go home and get something for him to autograph for me. I went home and brought back the 1979 Reds yearbook (McNamara’s Band) and he was kind enough to sign it for me.

Seven years later when Mookie Wilson’s ground ball went through Boston first baseman Bill Buckner’s legs and cost the Red Sox Game 6 of the 1986 World Series, the camera showed a despondent John McNamara, who then was managing the Sox. And I was watching the game at Northgate Lanes.

How ironic is that?

In 1987, I went to visit an Air Force buddy of mine that lived in Livonia, Michigan, which is close to Detroit. Before I left, I coordinated a press pass with the Tigers’ Dan Ewald for an interview with their manager, Sparky Anderson. My buddy came with me as a photographer and got some great pictures of Sparky. 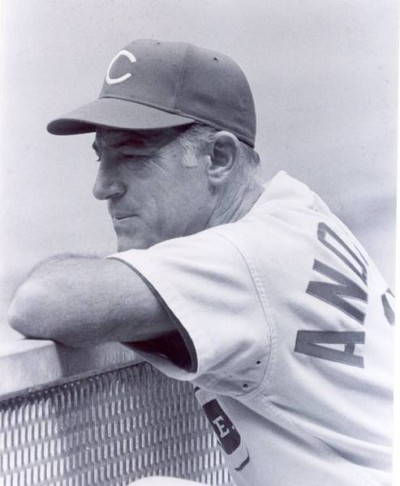 Sparky was what you would expect. He was affable, funny, polite and talking baseball with him was very special, at least for me. Again, we centered on Cincinnati. He recalled old friends, old hangouts and his players. He referred to Pete Rose as Ã¢â‚¬Å“Peter Edward.Ã¢â‚¬Â He spoke of Johnny Bench as Ã¢â‚¬Å“the best catcher in the history of the gameÃ¢â‚¬Â and his affection for Bob Howsam was genuine. Howsam gave Sparky his chance in late 1969 when he hired him as the Reds skipper. And that’s why Anderson, when inducted into the Baseball hall of Fame, had his sculpture done with a Reds hat instead of a Tigers hat.

Ã¢â‚¬Å“It’s funny,Ã¢â‚¬Â Sparky said to me, Ã¢â‚¬Å“because when we were losing or going through a bad streak, Mr. Howsam never bothered me or would call me. He left me alone. He was your best friend when you were losing. He was hardest on you when you were winning.Ã¢â‚¬Â

Interviewing Sparky Anderson for thirty minutes before a Tigers game in their dugout was pure joy. And my Air Force buddy, Mike Filarecki, caught it with a photo which I have in my den.

So there it is. Marge, Vada, Mac, and Sparky, some good memories. I forgot for a few moments — and hopefully you did, as well — about this year’s bullpen, Ohlendorf, Simon, the no-hit 16-0 loss, and a lot of other bad memories.