So the Reds missed the postseason for the third straight year. That doesn’t mean baseball is over! The MLB Postseason features the best playoffs in professional sports. There are plenty of good story lines, and plenty of former Reds to root for. 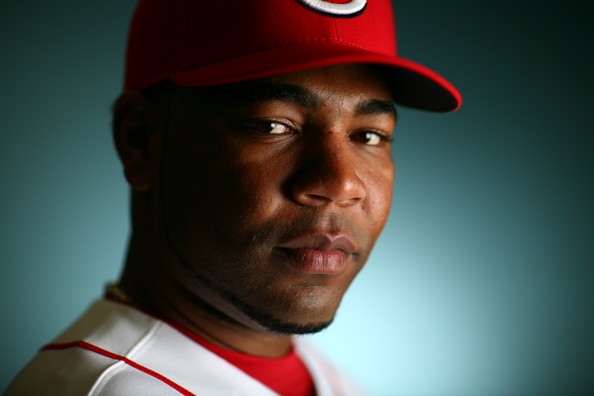 The first game of the postseason will feature….EDWIN! Our founder Chad Dotson has always been a defenderÃ‚Â of Edwin Encarnacion long before his recent run of 42, 36, 34, 39, and 42 home run seasons over the last five years. Hmmmm, I wonder what Scott Rolen is up to these days #toosoon

This matchup will feature Chris Tillman (3.77 ERA/4.23 FIP) vs Marcus Stroman (4.37 ERA/3.71 FIP). The game will be played at the Rodgers Centre, which hosted one of the loudest postseason games of all-time last season, which included the greatest bat flip in MLB history. The Orioles had the most home runs in the MLB this season (253), while the Blue Jays were 4th (221). That means this will be a 1-0 game, with the winning run scored on an RBI groundout.

Drew Stubbs and Paul Janish are both also on the Orioles current roster. Stubbs will likely make the playoff roster, while Janish will probably be on the outside looking in. Dioner Navarro is on the Blue Jays roster. He had a cup of coffee with the Reds win 2012, including a really cool walk-off triple. 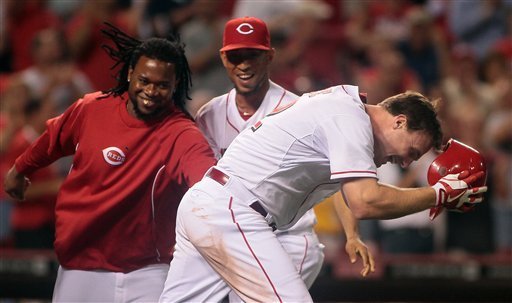 It will be difficult for a Reds fan to chose who to root for. We need to see the Giants win to see Johnny Cueto actually pitch in the playoffs (unless he comes out of the bullpen on Wednesday night, which would be awesome!). But, how cool would it be to see Jay Bruce hit a huge postseason bomb (wait, those dirty Mets fans don’t deserve that!). Bruce went into one of those really, really dark Jay Bruce signature slumpsÃ¢â€žÂ¢ to begin his time in NYC. Bruce turned it around at the right time, homering in three straight games in the final week of the season. Let’s just hope Jay sobered up from that big celebration on Saturday.

The Giants also have that “even year” thing going for them. Me and Chad are the only ones who still like Jay Bruce. The other writers have turned quickly. 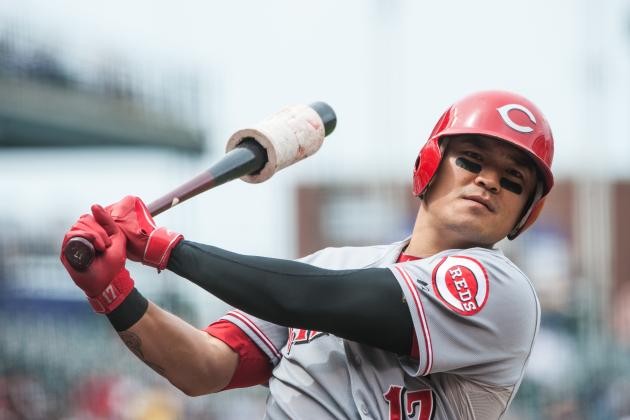 The Rangers do have Shin-Soo Choo though! Well, maybe. Choo missed most of the last two months of the season, and just returned over the weekend going 2 for 12. The Rangers are noncommittal right now if he will make the postseason roster. Oh the glory days of having the two on-base machines on the same roster. 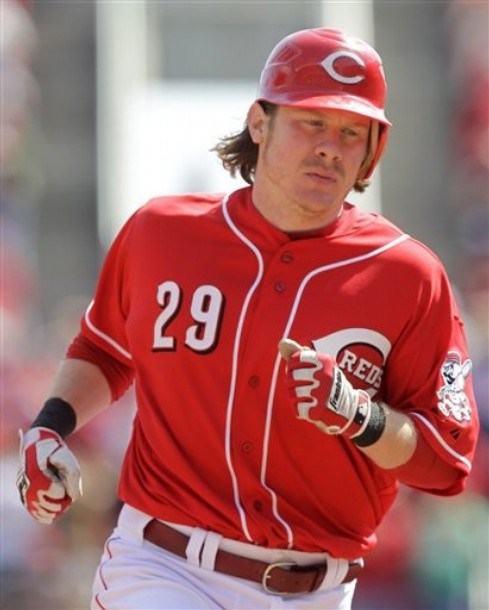 The Red Sox have Ryan Hanigan, although he may not make the postseason roster. One guy that will make the roster is Cincinnati’s own Andrew Benintendi. He hit .295/.359/.476 with a 120 wRC+ after being called up in early August. Benintendi attended Maderia High School, and was actually drafted by the Reds in the 31st round of 2013, although he didn’t sign.

On a personal note, I have to ask that you root for the Indians. Ya, ya, ya, I know you all hate Cleveland, but I have a good reason. My wife is a die-hard Indians fans (you can view her tears as proof from when they clinched here). Anyway, she cheered hard against her better judgement for our Reds in 2012 and 2013, so I think we owe it to her to return the favor, right? We will be at Game 1 and Game 2 in Cleveland, so look for us! 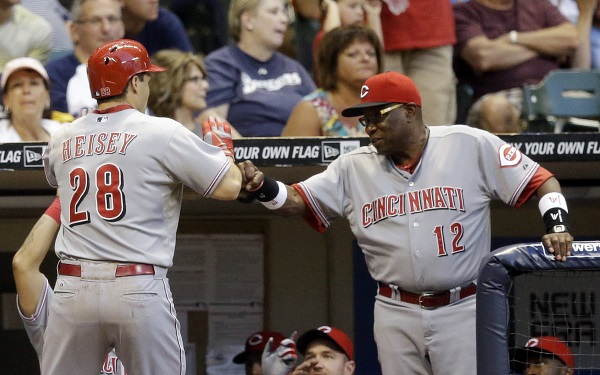 This is a very intriguing matchup. The Dodgers and Nationals have been to the postseason a combined five times in the last five years, but neither has had much success (the Dodgers won just one series,Ã‚Â and the Nationals franchise hasn’t won a playoff series since 1981).

The Nationals are of course managed by the polarizing Dusty Baker. They also have one of my all-time favorite Reds, Chris Heisey. He has hit five pinch-hit home runs this season, and maybe, just maybe he could hit a big one for the Nationals. The Nationals also have former Reds Matt Belisle and Mat Latos (gross). Belisle is expected to make the roster, Latos is not. Yasmani Grandal is also the Dodgers starting catcher, although he was only a top prospect with the Reds and never made the big league club.

Personally, I really hope this is the year Clayton Kershaw has that masterful postseason we have all been waiting for. Kershaw literally could go down as the greatest pitcher ever, and I am tired of his ridiculous criticism for having a couple bad 7th innings in the playoffs. 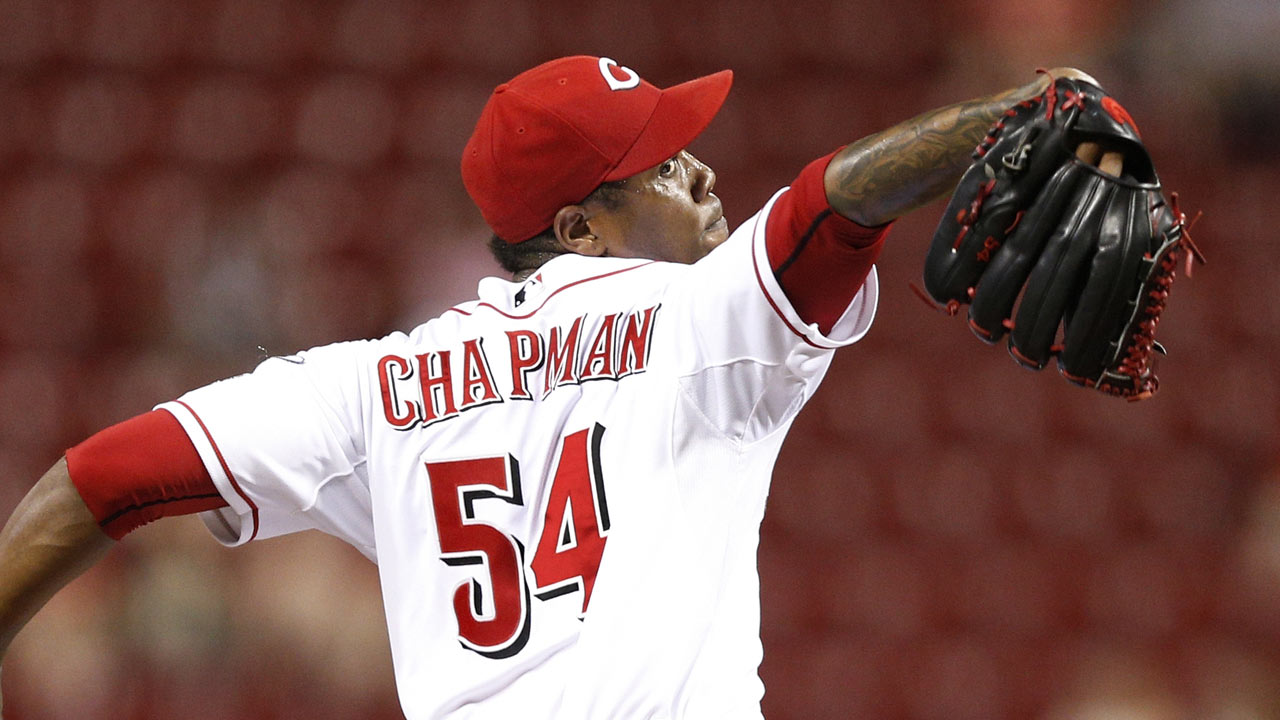 1908. 1908. 1908. This could be the year the famous chant ends. Chanting 2016 next season when the Cubs come to town just doesn’t have the same ring to it. The Cubs have a couple Reds on their roster: Travis Wood, David Ross, and some guy named Aroldis Chapman.

I wrote all about the Cubs in my 2016 NL Central review yesterday, so I’ll just direct you there. Wesley Jenkins also added #evenyearsorcery to his prediction.

Greg Dafler was the only RN writer to predict the Royals to win the World Series last year. He decided to quit making predictions while he was ahead. We had pretty good diversity this year, but Red Sox over Cubs was the most common pick. Enjoy the postseason everyone, and don’t forget to share your picks in the comments! You may also use this page to discuss the games, although we may open some more threads for individual games.