Bryan Price is a lame duck manager–not in the sense that he already knows he’s out the door , more along the lines of an actual lame duck could do his job and you wouldn’t be able toÃ‚Â tell the difference.Ã‚Â That’s not to say that Bryan Price has been a bad manager, butÃ‚Â that the Reds have been a bad team and no manager can overcome a bad team.

Bryan Price will also likely be fired. It’s nothing personal, it’s just the club is going in a new direction (i.e. not the bottom of the barrel), and with that new direction, the Reds need a new manager. There’s no guarantee that Bryan Price will be canned, but there’s no guarantee that he won’t, so we might as well speculate as to who the Reds should hire to replace him. To help this discussion along, I have compiled a series of highly scientific charts and data so that we all can be outraged in an informative way when the club inevitably makes the wrong decision. It’s just the nature of the thing.

There are two questions that need to be answered here: 1) What makes a good manager? and 2) what type of manager do the Reds need? The first question should be easy enough to answer whereas the second requires a more subjective response based on the intricacies within the answer of the first. Let me elaborate.

What makes a good manager?

Well, to be quite blunt, a good manager a) makes the playoffs and b) does well in the playoffs. That’s the only criteria needed. Therefore, in the interest of science, I looked into each of the managers poised to make the playoffs in the 2016 season (standings as of Tuesday night, which, as is the nature of baseball, are liable to change at any time). The ability of a manager to do well in the playoffs is more a crapshoot and less a measurable talent, so I ignored that particular aspect for convenience. As a result, I compiled a list of ten “good” managers.

After staring for a moment at that list, you realize that it gives you absolutely no concreteÃ‚Â data. It is just a list of meaningless names.

Going further, I investigated each of these managers and boiled them down to the two qualities most integral to a baseball manager: strategy and spunk. Each manager was givenÃ‚Â a rating for both qualities on scales of “sabr-nut to old school” and “cool as the flip side of a pillow to throwing rosin bag grenades,” respectively. These ratings were determined in the most effective way possible: Reading the comments on articles written about the managers on the team’s fan blog. Because John Farrell was described as having “the personality of a tax accountant,” he was ranked super low on the spunk scale. Likewise, Dave Roberts was described as “scrappy,” so he was ranked above neutral on the spunk scale, but not that high. For one more example, because of the headline “Mets manager Terry Collins rips sabrmetrics,” Terry Collins was not rated on the sabr side of the strategy scale. 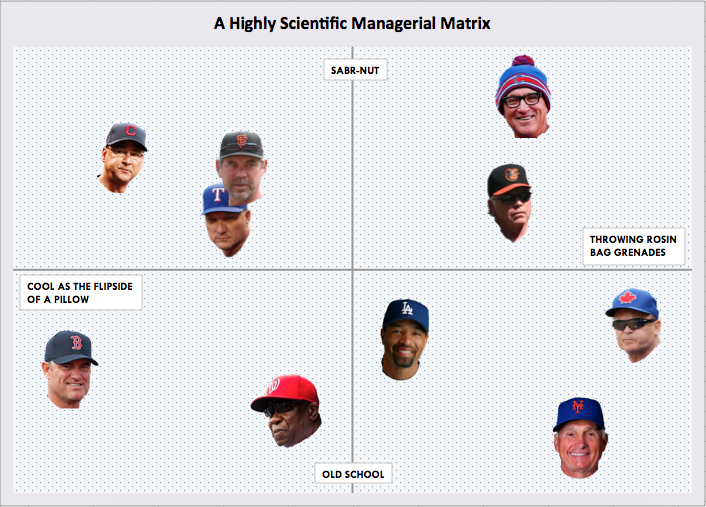 As you can see inÃ‚Â the above matrix, there is no one prototype for a good manager, so I did some more digging and found that the majority of these managers do share some common attributes.

Of the ten, 80 percent areÃ‚Â former players, 60 percent have won a World Series before, and 60 percent have been hospitalized at some point during their managerial career. This last commonalityÃ‚Â seemed like a confounding variable, but then I remembered the Lester Effect–named forÃ‚Â Jon Lester

–which describes a person overcoming a life-threatening occurrence and then absolutely dominating with the remainder of their days. This effect has also been referred to as the Lazarus Effect or the Reverse Shia LeBouf Effect.

With a strong foundation of what makes a good manager, I moved to the second question: What kind of manager do the Reds need?

Given the recent trend of “old school” Reds’ managers and the other recent trend of Reds’ managers not doing much (but thanks to Dusty Baker for the playoff memories) as well as the third recent trend of stoic, patient managers, I hypothesizedÃ‚Â that the Reds need a non-traditional, fiesty skipper at the helm. This hypothesis leaves plenty of room for speculation, but in order to maintain scientific integrity, I will compare each of these potential managers to the already designated “good” managers in order to ascertain if the potential manager will be a “good manager” for the Reds. Or, to be more explicit, we want a manager that falls inÃ‚Â this red circle.* 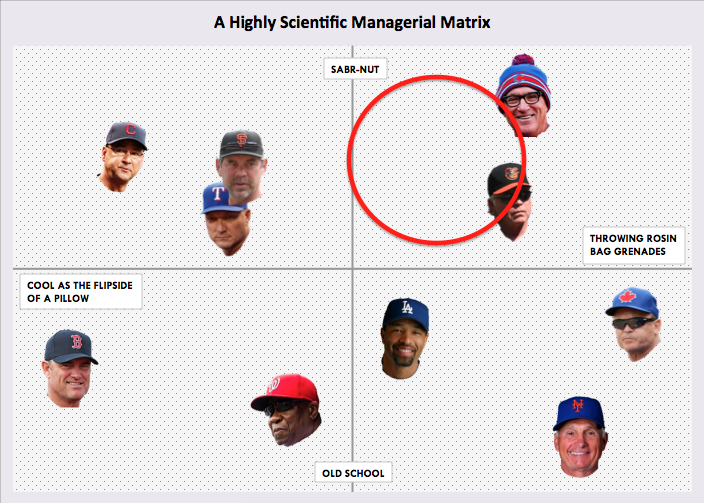 *Sadly, we will not be able to hire half of Buck Showalter’s hat.Ã‚Â

III. The Data (or the Potential Candidates)

After combing the same fan blogs to find potential managerial candidates, I arrived at a list of ten, which is compromised of three distinct groups–in house, AAA, and potential firings.

III A: In House Candidates 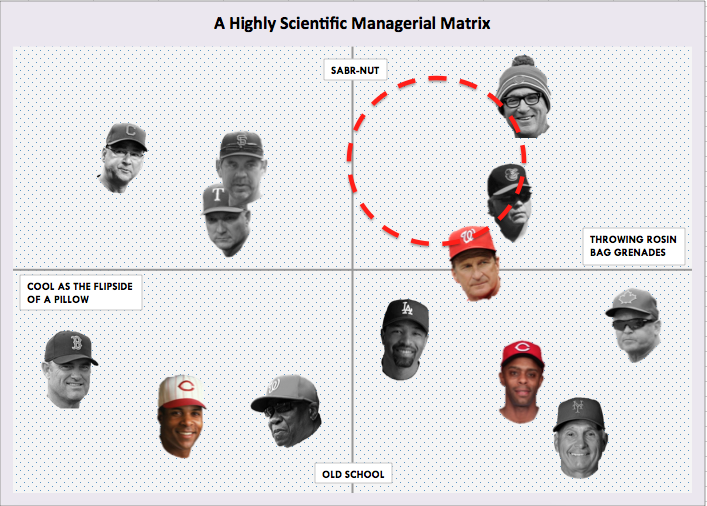 Delino DeShields — The first in house candidate, Louisville Bats manager Delino DeShields, does not land near the ideal circle, butÃ‚Â DeShields did playÃ‚Â back in the day, so he has that going for him. Also, he hasÃ‚Â familiarity with many of the current and upcoming Reds players due to his role in their development. However, comments he made about Robert Stephenson earlier this season speak to an old-school mindset that the Reds should probably deviate from if they want to keep up with the Cubs in their own division.

Jim RigglemanÃ‚Â — The Reds current bench coach and former AAA manager is a bit of a pariah in the managerial world, but lands the closest to the ideal manager. When Riggleman resigned from his Nationals’ job midway through the 2011 season, a lot of baseball people were rubbed the wrong way. He’s worked his way up the ladder in the Reds organization though, so he might not be a bad fit if he is tapped for the job.

Barry LarkinÃ‚Â — Probably the fan favorite for the job, Barry Larkin could not be further from the ideal circle. He’s a player, he’s won a World Series, but he’s as old school as they come and his demeanor is not one to fire up a lethargic team to make a pennant race. This is all conjecture, but Barry Larkin does not seem like the smart choice for the Reds. 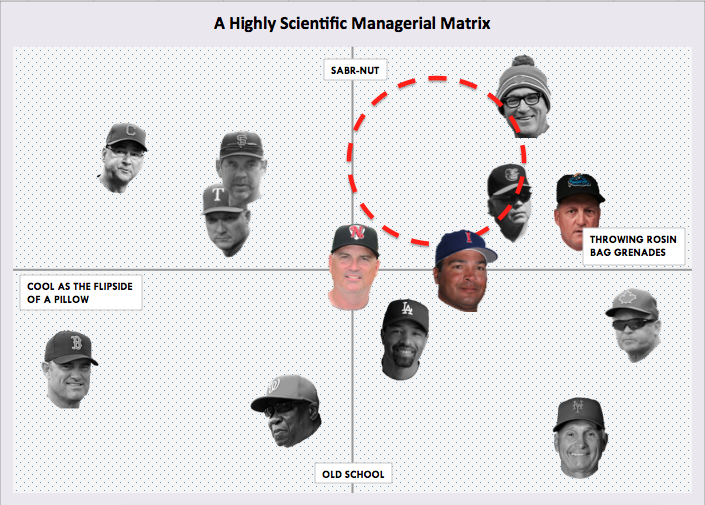 Steve ScarsoneÃ‚Â — The current Nashville Sounds manager, Scarsone just won Manager of the Year for the PCL after leading the Sounds to the conference finals for the first time in nine years. As a manager, Scarsone is about as vanilla as they come, but that’s not necessarily a bad thing. He doesn’t quite have the fire the Reds might be looking for, but he’s also not as old school as their past leaders, so maybe Scarsone could be a safe bet.

Pat ListachÃ‚Â — Also on the bland side, Pat Listach has done well with the Tacoma Rainers, calmly leading a talented team. The man has fought his way around the league a bit, spending time as a base coach in the pros with the Cubs, but ultimately has proven to be a good manager at the minor league level. Is that enough to be hired by a big league club? I wouldn’t say so, but I’m also operating off of the information I can Google, so I’m assuming higher powers would know a bit more.

Al PedriqueÃ‚Â — The only reason Al Pedrique gets to be on this list (other than winning his league’s Manager of the Year) is his instruction to the Diamondbacks pitchers when Barry Bonds was chasing his 700th home run to walk the slugger every single time over the three game series. If that’s not a gutsy, forward-thinking call, I don’t know what a good manager is even supposed to do anymore.

III C: Managers on the Cusp of Being Fired and thus Available for Hiring 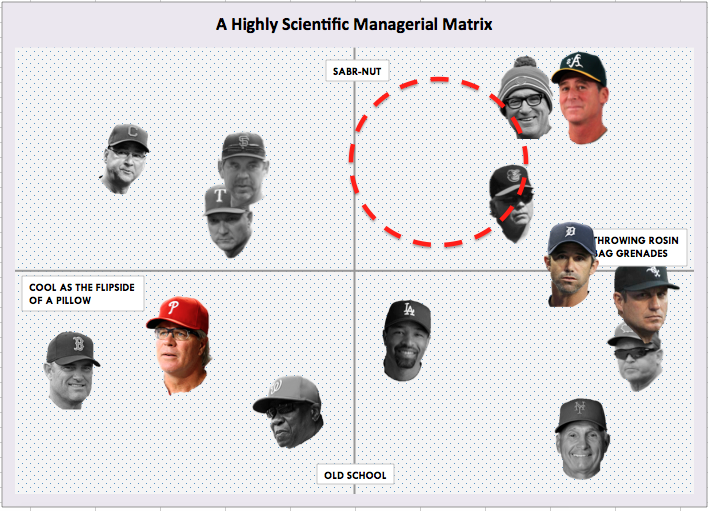 Robin VenturaÃ‚Â — Anyone who tries to tackle Nolan Ryan at any point in their life is going to rank highly on a scale of hot heads and Robin Ventura is no exception. The current White Sox skipper trends towards old school but sits more neutral and hasn’t proven himself to be a terrible manager, so if he is booted from the South Side, the Reds would be remiss not to make some calls.

Pete MackaninÃ‚Â — A former Reds manager himself, Pete Mackanin has had some success helping to turn around the Phillies from their miserable 2015 existence. However, it seems unlikely the Phillies keep him around for the next good team, so there’s no reason the Reds should take a flyer on them for theirs. Mackanin represents the same type of manager that the Reds have had recently, and, at least I believe, that a shake up is in order.

Bob MelvinÃ‚Â — Probably the best fit for the Reds on this list despite his positioning on the matrix, Bob Melvin is one darn good manager. There are rumors he’s worn out his welcome in Oakland, which could be people putting words into the mercurial Billy Beane’s mouth more than anything, but Melvin should be inquired upon immediately should he become available. (Side note: Google ‘Bob Melvin ejection’ and you’ll understand why he sits so far to the right.)

Brad AusmusÃ‚Â — A former catcher, Brad Ausmus has had a decent amount of success in Detroit and could still make the postseason this year. The Tigers have been in chaos mode over the past three years though and another missed postseason could mark the end of Ausmus’ time in the Motor City. I don’t think he’s the right fit for the Reds–too Brian Price-esque–but he wouldn’t be a totally objectionable hire.

To my great despair, not a single potential manager fell into the ideal red circle. Jim Riggleman tried to nudge his way up as did Pat Listach, and Bob Melvin looked down from above, but no one could quite crack it. Despite the arbitrariness of this whole exercise, having those three names emerge as the best available candidates does seem to validate the whole process. Riggleman is the likely choice, Listach would be the dark horse, and Melvin would be the top of the wish list.

At the end of the day, the likelihood of the Reds firing Bryan Price hits 80 percent tops, especially since he hasn’t done anythingÃ‚Â undeniably wrong, so this whole exercise is ultimately just an excuse to make mildly enjoyableÃ‚Â illustrations. That said, when the Reds do part ways with Price, which will be sooner than later, they should strongly consider moving away from the relaxed, old school traditionalist we’ve come to know and maybe try something different. The Reds can’t keep playing catch up forever, but they will if the one driving the car isn’t willing to tap the gas.