Robert Stephenson got off to a great start by retiring eight of the first nine batters he faced. His night turned around quickly however in the fourth inning. Stephenson gave up a couple of cheap singles and loaded the bases. That brought up Aledmys Diaz.

Diaz was playing in his first game since his close friend Jose Fernandez tragically passed away on Sunday. Diaz grew up on the same street as Fernandez in Cuba. Diaz came through with a grand slam, and was emotional returning back to the dugout. If a Cardinal is going to hit a grand slam against the Reds, that is one you can live with. 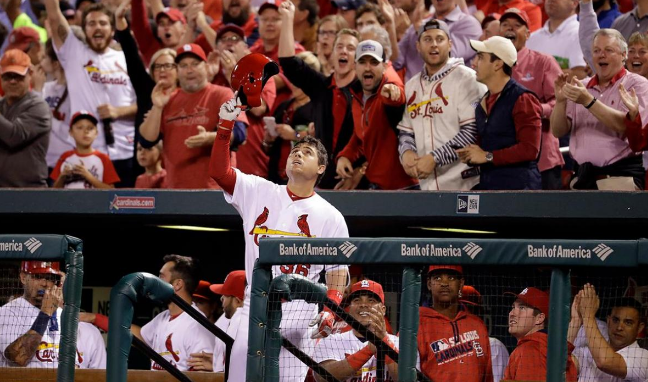 The Reds bullpen was a disaster. Matt Magill and Keyvius Sampson combined to give up seven earned runs and three home runs over 1.2 innings, and the game got out of control in a hurry.

Joey Votto and Scott Schebler each hit home runs, but it wouldn’t be nearly enough as the Reds fell 12-5. The win was a big one for St. Louis, putting them a half game behind the Giants at the moment for the second wild card spot. The Reds will still have a chance over the next two days to possibly spoil the Cardinals postseason. That could be a nice silver lining over the final week of a lost season. 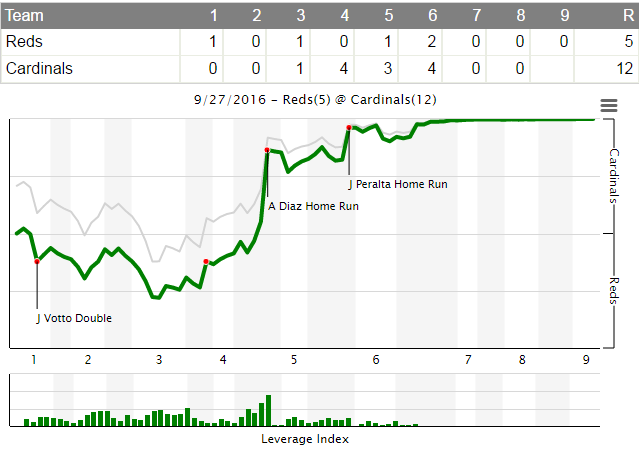 According to FangraphsÃ‚Â WPA statisticÃ‚Â (winning percentage added), the most important play of the game wasÃ‚Â Robert Stephenson allowing a grand slam to Aledmys Diaz with 1 out in the 4th inning, giving the Cardinals a 5-2 lead.Ã‚Â That play decreased the Reds chances of winning by 13.3% (from 46.8% to 13.5%).

Honorary Player of the Game

VottoÃ‚Â just continues to roll. He hit his second home run in as many days, and now has 28 on the season (the only time Votto reached 30+ HR was in his MVP season in 2010 when he hit 37). Votto also now has 92 RBI on the season, which should calm down a particular cranky broadcaster who is obsessed with rib-eye steaks.

Scott ScheblerÃ‚Â hit his 9th home run of the year. Schebler did have to leave the game after he came up limping running out a single, but it appeared to just be precautionary.

Robert StephensonÃ‚Â started off his night really strong. He retired 8 of the first 9 batters he face, and had 4 strikeouts through three innings. Stephenson however gave up a couple cheap singles, and then left a ball right down the middle of the plate toÃ‚Â Aledmys DiazÃ‚Â for a grand slam. There were certainly some positives from Stephenson, and he really showed some good stuff early. You just can’t give up grand slams in the big leagues.

I was inÃ‚Â Detroit last night to see theÃ‚Â Indians clinch the AL Central.Ã‚Â My wife is a die-hard Indians fan, and since she went with me to watch the Reds clinch in 2012, I figured that I should return the favor. It made me think about 2012 and how much I took it for granted at the time. Oh well.

It looks like this will be my final recap of 2016. It has been a pleasure doing them again this year, and I appreciate all of the good Reds banter that has come from them.