The four game losing streak is over. The Reds took care of the business in Milwaukee with a 6-1 win on Saturday evening. The Reds had lost eight of their last nine games entering tonight.

The Reds got rolling right away, as Joey Votto hit a two run home run in the first inning. That would be more than enough for Dan Straily. He allowed just one run over 6.2 innings, and the Reds bullpen finished the job. The Reds also padded the lead in the top of the ninth, thanks to some patient walks, and some shaky Brewers defense. 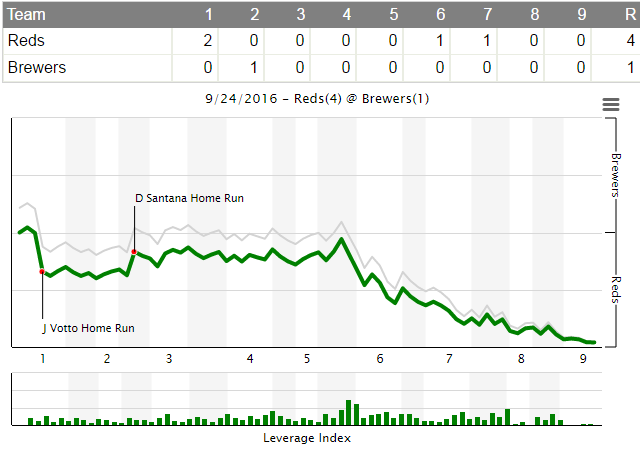 According to FangraphsÃ‚Â WPA statisticÃ‚Â (winning percentage added), the most important play of the game wasÃ‚Â Joey Votto’s 2-run home run with 1 out in the 1st inning, giving the Reds a 2-0 lead.Ã‚Â That play increased the Reds chances of winning by 16.9% (from 50.2% to 67.1%).

Just another really nice start from Dan Straily. I mentioned this is in the game preview, but it is really incredible that Straily leads the club in IP this season. Sure, his FIP shows he is due for some regression next season, but it is remarkable that he now has a 3.74 ERA this season. Well done Dan, well done.

I actually have to give a shoutout to my best man Matt. He gave me grief for saying that I liked Straily in the RN game preview before his first start with the Reds back in April.

Joey VottoÃ‚Â hit his 26th home run of 2016 tonight in the 1st inning. It was Votto’s 4th HR in his last 14 PA. VottoÃ‚Â also walked three times (once intentional). In both of the unintentional walks, Votto was down in the count 0-2 before he worked the walks. This guy is incredible.

Scott ScheblerÃ‚Â had a three hit night, including a double.

Adam DuvallÃ‚Â had a “hustling” double in the 6th inning, and then stole third base by getting a huge jump.

Michael LorezenÃ‚Â got Straily out of a jam in the 7th, and then pitched a scoreless in 8th inning.Ã‚Â Raisel IglesiasÃ‚Â pitched a perfect 9th inning.

I’ve got nothing tonight.

Reds broadcast just gave the rankings of the teams leading the NL in sacrifices:

I wonder what they have in common?