The Reds haveÃ‚Â used 30 pitchers this season, and that number could very well reach 32 once recent call-ups Abel De Los Santos and Matt Magill appear in a game. Most of those pitchers won’t be around next year. Some are already off the roster. Others are competing for a spot on next year’s club.Ã‚Â Keyvius Sampson falls into the latter category.

The 25-year-old has become a bit of a forgotten man among Reds fans. He made 13 appearances with the big league squadÃ‚Â last season, including 12 starts. Things didn’t go particularly well, as he posted a 6.54 ERA, 4.76 FIP, and 4.97 xFIP in 52 1/3 innings. At least some his 2015 strugglesÃ‚Â could be attributed to injury, as he had surgery to repair “loose bodies” in his throwing elbow during the offseason.

Coming into 2016, the Reds placed the right-handerÃ‚Â in a more suitable long relief role atÃ‚Â the beginning of spring training. The season has been an up-and-down one for Sampson. He has worn out a trail between Cincinnati and Louisville, as he’s been been called up from or sent down to Triple-A six different times and was even designated for assignment by the organization in April. Sampson has dominated minor-league hitters to the tune of a 1.88 ERA and 2.86 FIP, but hasn’t had quite the same success in the majors. While his 3.41 ERA is rock solid, his FIP sits at 5.47 while his xFIP is 5.15 — both worse than his rookie numbers.

Still, there is reason to be intrigued by Sampson’s arm. Throughout his minor-league career, he has posted high strikeout totals, punching out 24.4 percent of the hitters he’s faced. Although that number dipped a bit in recent years, he brought it back up to 25.6 percent this season. His major-league strikeout rate has been above average as well, sitting at 23.7 percent. In his spot start on Monday night, he fanned a career high seven hitters in only 4 2/3 innings.

Sampson has twoÃ‚Â really nice pitches, too. Per PITCHf/x data, he has a whiff rate of 28.8 percent on his changeup and 18.3 percent on his curveball. He’s allowed only two hits on the former pitch and none on the latter. While his curveball has always been highly touted, the righty’s changeup has shown considerable improvement since last year, when his whiff rate on the pitch sat at only 10.6 percent.

According to Statcast, batters simply haven’t been able to square up either pitch; the average exit velocity against his changeup is 82.9 mph while the curve has averaged a mere 71.4 mph (both are small samples, but this isn’t something to be ignored, given the whiff rates batters have against the pitches).Ã‚Â He doesn’t use either pitch all that much — turning toÃ‚Â the curve 11.5 percent of the time and theÃ‚Â change on 9.3 percent of his pitches — but he’s certainly effective when he does use them.

Despite a below-average whiff rate, theÃ‚Â slider has also been a decent pitch for Sampson, with batters hitting just .172 with a .276 slugging percentage against it.

So what’s the bad news with Sampson?

TheÃ‚Â most obvious issue — and the reason he was waived by the Padres last year — is control. It’s been a problem for him throughout his career and that has been the case again in 2016, as his walk rate has been a robust 13.6 percent. Among the 406Ã‚Â pitchers with 30 or more innings, that ranks asÃ‚Â 11th-worst (tied with fellow Reds reliever Tony Cingrani).

That being said, there have been some signs of encouragement in this department for Sampson. In his 62 1/3 innings in Louisville, he kept that number at 8.7 percent. The only other time he walked so few hitters in an extended number of innings was during his second stint in Double-A in 2013, when his walk rate was just 8.0 percent in 103 1/3 innings.

Something else to note is that Sampson’sÃ‚Â walk rate has steadily gone down during his sporadic time in the majors this year. He issuedÃ‚Â 11 free passesÃ‚Â through his first 9 2/3 innings, but has only walked 12 batters over the next 27 1/3 innings. While that still equates to almost four batters per nine innings, it’s much better than the way he started out. 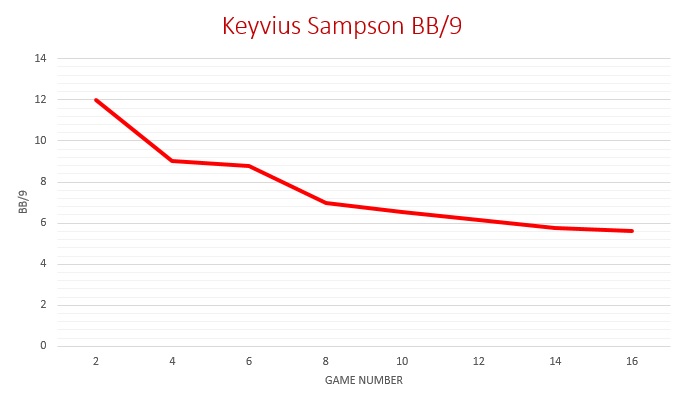 However, his high FIP isn’t only related to walks. Sampson has given up nearly two home runs per nine innings this season, sporting an inflated home-run-to-fly-ball ratio of 14.9 percent. Considering he’s a fly-ball pitcher — his career grounder rate is only 38.8 percent — Sampson is going to give up his fair share of long balls. What’s really important to look at is how hard balls are getting hit against him. Is he just getting unlucky or is he legitimately getting rocked?

Against Sampson’sÃ‚Â off-speed and breaking pitches, he isn’t getting hit hard at all. The fastball has been another story. Five of the seven home runs he’s allowed have come on the four-seamer. It makes sense that batters would have more home runs on the heater since he throws itÃ‚Â nearly 60 percent of the time, but that doesn’t account for such a high rate. A deeper dive into the numbers shows that batters have hit the ball at an average exit velocity of 91.3 mph on the pitch (it dropped a full 1 mph after his start on Monday), just a tad above the league average of 90.5 mph. Since harder-hit balls tend to go for hits more often, it makes sense that he’s given up aÃ‚Â .317 batting average on the pitch.

There is some room for optimism in this area, as well. Given Sampson’sÃ‚Â erratic control at the beginning of the season, it’s not surprising that he also allowed a lot of home runs. He gave up a home run in each of his first three appearances and a total of five home runs over his first six outings scattered over the course of the season’s first three months. Since then, he has allowed only two round-trippers in 24 2/3 innings — less than one per nine innings. 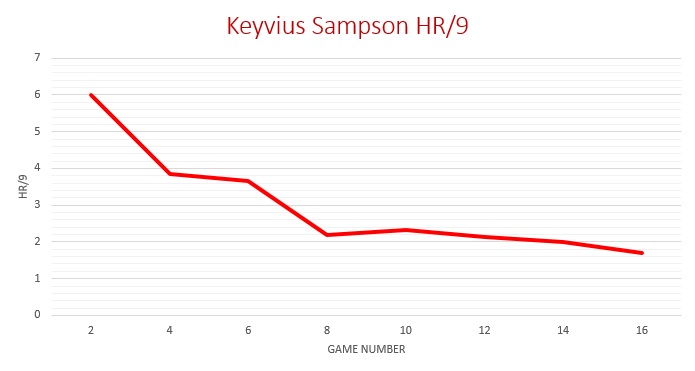 Whether it had to do with him working his way back from offseason surgery or just being flat-out ineffective, Sampson’s start to the 2016 put him out of the minds of many Reds fans. But he’s been steadily improving as the season has gone on. Since July 16, he has posted a 1.46 ERA, 3.31 FIP, and 4.03 xFIP, while averaging 10.58 strikeouts and 4.01 walks per nine innings. With numbers like that, he can certainly carve out a role on next year’s team as the long reliever. The question will be whether he can continue improving and maintain this consistency.