Today marks the beginning of a series I’ve been planning to start for a long time: Reds By The Numbers. For whatever reason, I’ve always been interested (obsessed?) with the Reds’ uniforms and each individual’s uniform number. When I see someone wear 36 now, I immediately think of Mario Soto (not Blake Wood). When I see 23, I’m thinking Hal Morris (not Adam Duvall…though, if he keeps hitting 30+ homers a year, I may think of Duvall instead of the next guy to wear the number).

Uniform numbers, to me, provide an interesting way to look back at Reds history. It’s a different reference point, and I thought it might be fun to explore each of the numbers and the men who wore them. We begin today with #1.

Reds who have worn #1 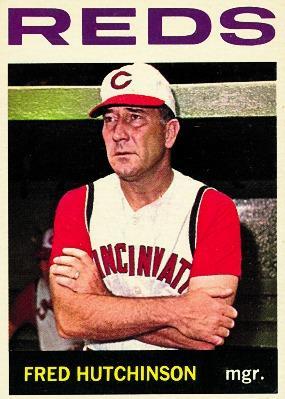 Uniform #1 was retired in 1965 in honor of Reds manager Fred Hutchinson. Hutchinson pitched ten effective years for the Detroit Tigers before hanging it up. For the last year and a half of his time with Detroit, he served as player-manager — beginning at the tender age of 32. He had managed three years in Detroit and three in St. Louis (winning the NL Manager of the Year award in 1957, after leading the Cardinals to a second-place finish) by the time he was named manager of the Reds in 1959.

Hutchinson succeeded Mayo Smith, who also wore #1. Smith was in his first year as Reds manager, but the club was only 35-45 at the All-Star break. He was fired and replaced by Hutch. Hutchinson managed the team to a winning record, but the Reds faltered to a 67-87 mark the following season.

Hutchinson began writing the first lines of his legend in 1961. The Reds were in bad shape as a franchise at that time. It had been two decades since they won a World Series, and in the meantime, they had only finished within 12 games of first place once. Cincinnati was the only National League team that didn’t appear in a single world series over that 20-year period.

The 44 year-old Hutchinson managed the 1964 season while fighting inoperable lung cancer. He was forced to leave the team for extended periods while undergoing treatment, but he led the club from the dugout as often as he was able. His inspirational story became national news, especially since the Reds competed until the very end; they lost on the last day of the season to finish one game out of first.

Hutchinson died a month after the season ended, but his fame only grew. Sport magazine named him “Man of the Year.” The Reds retired his number the following season and, to this day, the Hutch Award — “honoring perseverance in the face of adversity” — is presented annually.

Though #1 belongs to Hutch from now on, thanks to its retirement, he may not even have been the best manager to wear #1 for the Redlegs. “Deacon” Bill McKechnie is a Hall of Fame manager who piloted the Reds from 1938 to 1946. Only one manager in Reds history has managed more winning games than McKechnie (Sparky Anderson, as I’m sure you guessed). 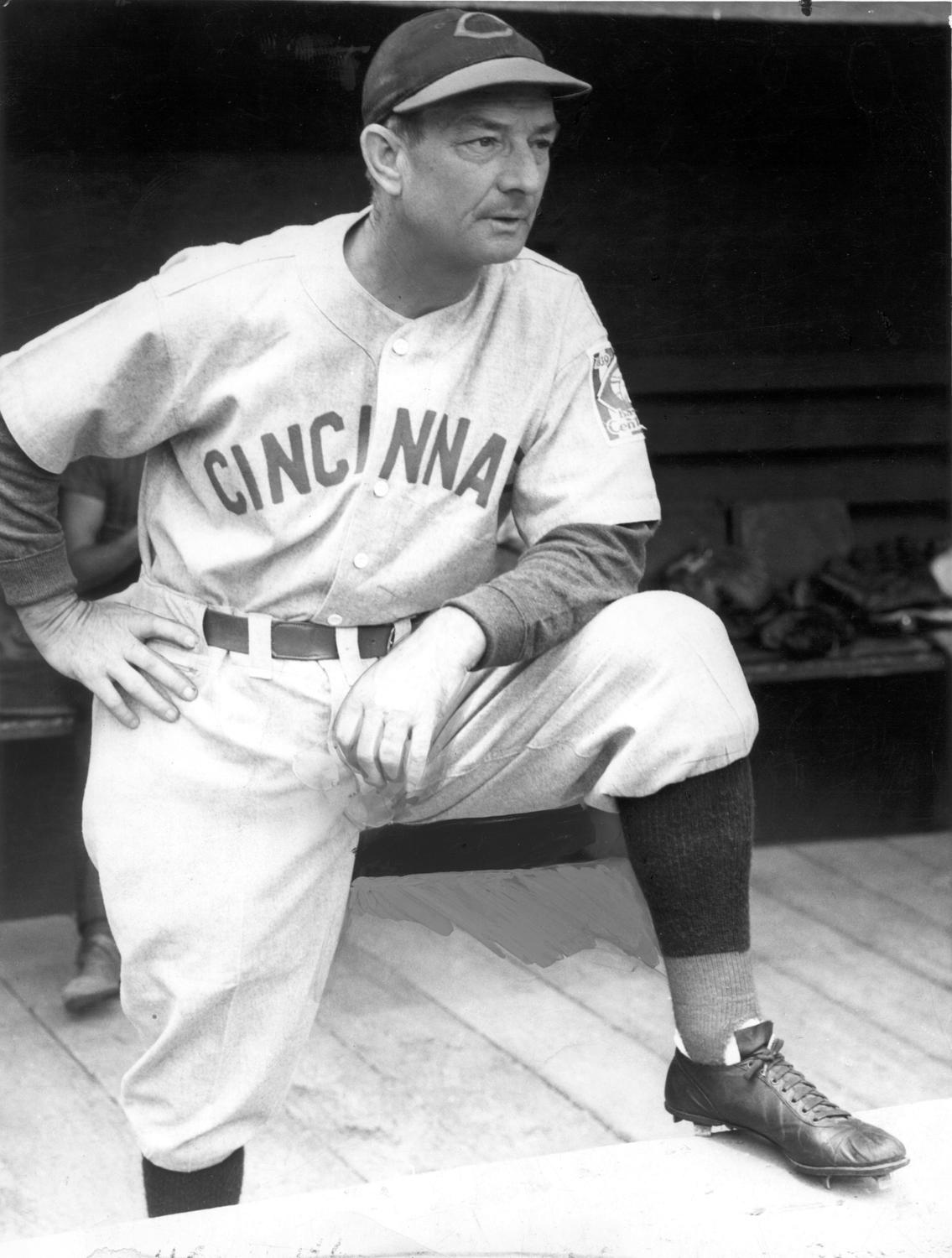 McKechnie was a soft-spoken “player’s manager” who had actually managed the Pirates, Cardinals, and Braves before taking over in Cincinnati. He took three of those teams — Pittsburgh, St. Louis, Cincinnati — to the World Series.

He took over the Reds in circumstances similar to those of Hutchinson two decades later. The Reds had been mostly terrible since winning the 1919 World Series, and they finished in last place in 1937. GM Warren Giles and owner Powel Crosley convinced McKechnie — already a well-respected manager — to take over the Reds, and they immediately bumped up to fourth place in 1938. The following two seasons, McKechnie’s Reds — led by pitching greats Paul Derringer, Bucky Walters, and Johnny Vander Meer, plus Hall of Fame catcher Ernie Lombardi — won the National League pennant and, in 1940, the Reds won their second World Series.

McKechnie was inducted into the baseball Hall of Fame in 1962.

The first player to wear #1 for the Reds was George Grantham. “Boots” Grantham was given that number for the simple reason that he was the primary leadoff hitter in 1932, when uniform numbers were first issued. Grantham had been a fairly effective big leaguer for ten seasons with the Cubs and Pirates before being purchased by the Reds at age 32. Playing mostly second base with the Reds, he hit .262/.345/.382 in 213 games. After the 1933 season, Grantham was traded to the Giants for the immortal Glenn Spencer, who never played a game for Cincinnati.

Another Hall of Famer (besides McKechnie) wore #1 for the Reds: Jim Bottomley, who had spent 11 productive years as a slugger with the Cardinals before coming over to the Reds in a trade before the 1933 season. Bottomley didn’t wear #1 initially, since Grantham was his teammate in 1933 (Bottomley wore #3 thatÃ‚Â  year). The following season, Bottomley claimed #1 and over the next two seasons hitÃ‚Â .273/.312/.391 with 12 HR and 127 RBI in 249 games as the Reds’ first baseman.

Bottomley never reached the same heights with Cincinnati as he had seen in St. Louis, and before the 1936 season, he was traded to the Browns for Johnny Burnett…who never played a game for Cincinnati. (There seems to be a trend here.) Bottomley was inducted into the baseball Hall of Fame by the Veteran’s Committee in 1974.

No other players distinguished themselves while wearing #1. Gilly Campbell was a catcher who wore three different uniform numbers in his three-year Reds career (1, 19, 35), and hit only .268/.384/.345 in 89 games while wearing #1 in 1936. Gus Brittain and Dee Moore both wore #1 during 1937. Brittain batted six times in his two-month big league career, striking out three times, but he did collect one single. After Brittain was sent packing, Moore took over the uniform number as well as Brittain’s spot as the backup catcher for the 1937 Reds. Moore played in seven games, batted fifteen times, and put up the sterling slash line of .077/.200/.077.

At that point, the Reds must have decided that they weren’t doing any favors to players by giving them #1, so it was only issued to managers from that point forward. Of the six managers who wore the number, only Hutchinson and McKechnie had much success. After Deacon Bill, the number was given to Johnny Neun, who led the Reds to 117 wins and 137 losses before being fired in August of 1948.

Bucky Walters was one of the best pitchers in Reds history (when he wore #’s 31 and 56), but he also managed the Reds. In 1948, after Neun was fired, Walters became player/manager of the Reds (the last player/manager for the franchise until Pete Rose in 1984), but he continued to wear his customary #31 for the rest of that season. When he retired as a player, he switched over to #1 for 1949, but led the Reds to a miserable 61-90 record — and seventh place — before being replaced by Luke Sewell for the final three games of the season.

Birdie Tebbetts managed the Reds from 1954 to 1958, during which time the Reds went 372-357. Though he had a winning record, the Reds never finished higher than third during his tenure, but that third place finish came in an exciting season. In 1956, Tebbetts’ Reds were 91-63, and they remained in the race all the way until the end, ultimately finishing two games back. For his efforts, Tebbetts was named NL Manager of the Year. Eventually, the stress of managing became too much to bear, and Tebbetts resigned mid-way through the 1958 season.

One year later, Fred Hutchinson was hired, and the Reds were on their way to the most successful two-decade run in franchise history.