Instead, the Reds won three straight, effectively pushing Clint Hurdle’s Pirates off the end of their own plank. They’ll spend the postseason dog-paddling in an ocean of mediocrity.

If you predicted the Reds wouldn’t win 60 games this year, you were wrong. Eight of those wins have been against the Pirates.

Brandon Finnegan made it through five innings. There are two ways to look at his performance. On the one hand, he gave up no runs. His strike out numbers have been fantastic. In his last five starts – including 7 Ks today – Finnegan has struck out 42 batters in 30 innings.Ã‚Â But he also surrendered five walks and five hits. Twice he worked around bases loaded. Walks continue to be a problem for Finnegan, he walked four in his previous start. Finnegan’s ERA is now 4.04 but his FIP is 5.28, far and away the worst for a qualified starter in the NL.

Today’s start was Finnegan’s 29th of the season. He’s now thrown 164.2 innings compared to 105.1 last season. Bryan Price said earlier in the week he was looking for Finnegan to make one more start after today. “IÃ¢â‚¬â„¢d like to see if we can get him to 30 starts and into that 170-175 innings range,” said Price. “That would be a good workload and a good season for Brandon.Ã¢â‚¬Â

The Reds pulled way ahead in the top of the 2nd with five runs. Adam Duvall started off the inning with a triple. Brandon Phillips lined a single to center that Andrew McCutchen misplayed into two more bases for the Reds second baseman. A Scott Schebler ground out scored Phillips. Tyler Holt tripled past a diving McCutchen, driving in Ramon Cabrera and Ivan De Jesus Jr., who had walked and been hit by a pitch. Eugenio Suarez plated the final run with an infield single.Ã‚Â Phillips and Schebler hit back-to-back doubles in the third to add the Reds’ sixth run.

Andrew McCutchen’s poor defense in CF doesn’t come as a surprise to anyone who pays attention to actual measurements of that skill. McCutchen has consistently put up negative defensive metrics over his career. Even before today’s game, McCutchen rated as one of the ten worst defensive players in the NL. The Derek Jeter of his day.

Tyler Holt was 3-for-5. Eugenio Suarez had two hits and a walk, but also let a double play ground ball go between his legs. Brandon Phillips was 3-for-4.

Bryan Price announced today that the Reds are skipping Anthony DeSclafani’s start tomorrow. Zach Buchanan reported that Price said DeSclafani is fine, but that the manager had noticed a downtick in DeSclafani’s stuff the last few starts. Ã¢â‚¬Å“ItÃ¢â‚¬â„¢s just a breather,Ã¢â‚¬Â Price said. Ã¢â‚¬Å“HeÃ¢â‚¬â„¢s had a little bit of a lull in his stuff. He wasnÃ¢â‚¬â„¢t saying anything, heÃ¢â‚¬â„¢s fine.Ã¢â‚¬Â Instead, Keyvius Sampson will receive a spot start. Sampson last started on August 16 against the Brewers. He gave up two hits and a walk while striking out four in five innings. Sampson is a logical candidate to take Finnegan’s spot in the rotation the last three weeks of the season.

Nick Kirby, who is on his honeymoon, was repping Redleg Nation at Cooperstown today! 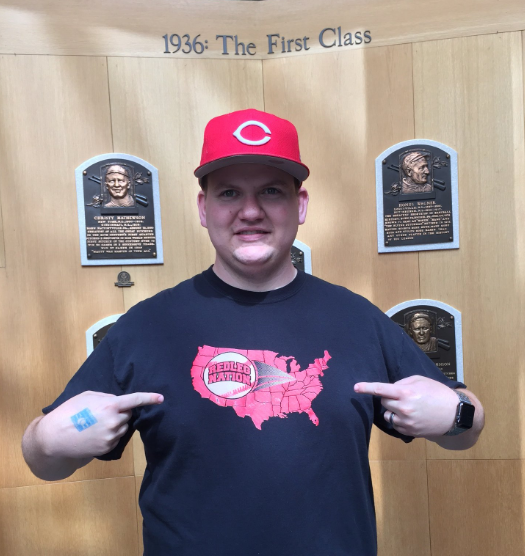