The Reds lost their 82nd game on Thursday night, which officially means 2016 will be a losing season for the Reds. It will be the Reds third consecutive losing season.

The Reds have now lost five straight games, and are 4-13 over their last 17 games. What was once looking like a promising finish to a rebuilding year is looking more and more like……well, a rebuilding year. 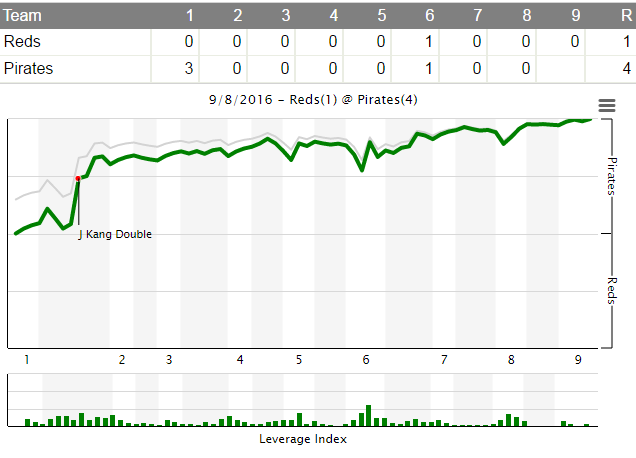 According to FangraphsÃ‚Â WPA statisticÃ‚Â (winning percentage added), the most important play of the game was Dan Straily allowing a 2-RBI single to Jung Ho Kang with 2 outs in the 1st inning, giving the Pirates a 2-0 lead.Ã‚Â That play decreased the Reds chances of winning by 19.9% (from 45.9% to 25.9%).

Nova dominated the Reds, and went the distance on just 94 pitches.

If it weren't for the single run, the #Reds would be on the receiving end of a Maddux twice in the past 8 days.

Hernan IribarrenÃ‚Â had another pinch-hit! It was only a single tonight though.

The Reds offense was pretty bad.

Keyvius SampsonÃ‚Â gave up two hits and run in his inning of work.

I think Nick Carrington hit the nail on the head earlier this week when talking about Straily and his future with the Reds. Straily will make for a nice long reliever/spot starter for the Reds in 2017, but really shouldn’t be counted on as part of the rotation.

I was reminded tonight just how incredible PNC Park is. I’ve been to PNC Park to watch the Reds play there every year since 2012, mainly because PNC Park is about half the distance as GABP for me. I won’t however be able to make it this year (that getting married thing got in the way), and that really stinks. It is a really beautiful place to watch a baseball game, and I highly encourage you to make a trip there. It is well, well worth it.