HeÃ¢â‚¬â„¢s given up at least one run in every appearance heÃ¢â‚¬â„¢s made this season prompting Benjamin Franklin to return from the great beyond in order to tack on an addendum to one of his famous lines: Ã¢â‚¬Å“Nothing can be said to be certain except death and taxesÃ¢â‚¬Â¦and Alfredo Simon giving up runs.”

Joel Luckhaupt Ã¢â‚¬â€œ author, statistician, and friend oÃ¢â‚¬â„¢ the Nation Ã¢â‚¬â€œ had a tweet over the weekend to put SimonÃ¢â‚¬â„¢s worst-ness into historical perspective:

JoelÃ¢â‚¬â„¢s list sparked my curiosity. I vaguely remember Fogg, but I had never heard of Cross or Hook. What parallels could we find between the other players with abysmal ERAs and Alfredo? Did any of them have a nickname as cool as Ã¢â‚¬Å“The Big Pasta?Ã¢â‚¬Â Did any of them pretend they were 21 months younger and were named Carlos Cabrera when they originally signed? Did any of them (allegedly) commit multiple crimes? To the internets!

Lem was a RHP from Sanbornton, New Hampshire, a town of less than 3,000 people about 40 minutes north of Manchester that was originally called Crotchtown. I kid you not. Presumably, Genitalville was taken. Ditto for Groinburg and Private Parts-opolis.

LemÃ¢â‚¬â„¢s full name was George Lewis Cross which sparks the question: Why was he called Lem? Funny story. He wasnÃ¢â‚¬â„¢t. The first time anyone ever called him Ã¢â‚¬Å“LemÃ¢â‚¬Â was in the pages of the inaugural edition of The Official Encyclopedia of Baseball in 1951. The Encyclopedia was great but it was chock full of errors and typos and, so, George Lewis Cross Ã¢â‚¬â€œ known to his friends as Ã¢â‚¬Å“LewÃ¢â‚¬Â Ã¢â‚¬â€œ became Ã¢â‚¬Å“LemÃ¢â‚¬Â for eternity. I can relate. My high school letter jacket has the name Ã¢â‚¬Å“Ron CarpendarÃ¢â‚¬Â etched permanently on it.

Lew/Lem made his first appearance for the Reds on August 6th, 1893. His manager, Charles Comiskey Ã¢â‚¬â€œ yes, that Charles Comiskey* Ã¢â‚¬â€œ wasnÃ¢â‚¬â„¢t thrilled with the four runs that Cross coughed up in three innings against the Cardinals and sat Cross on the bench for five weeks before letting him make two more starts to close out the season. Cross made the team out of spring training in 1894 but after getting hammered in his first start, he was sent down to Indianapolis where he promptly gave up 48 (!) runs in his first two appearances before settling down a bit. He got called back up later in the summer and squeezed in a few more appearances for the Reds before throwing his last pitch in the bigs on the one year anniversary of his major league debut. I wonder how many players threw their first and last pitch on the same day but different years. Joel? Are you out there?

(*Quick side note about Comiskey. Like Lem, 1894 was ComiskeyÃ¢â‚¬â„¢s final season as a big leaguer. Comiskey had been the player/manager of the Reds for three years but after a 16-16 tie against the Cleveland Spiders in the 134th Ã¢â‚¬â€œ and final Ã¢â‚¬â€œ game of the season, Comiskey quit, bought the Sioux City Cornhuskers in the Western League, promptly moved them to St. Paul, Minnesota and renamedÃ‚Â them the Saints. A few years later he moved them to Chicago, changed the teamÃ¢â‚¬â„¢s name to the White Stockings, and joined the brand new American League. 18 years later his team lost the Reds in the 1919 World Series. Take that, Charles.)

Two of CloseÃ¢â‚¬â„¢s teammates, Chauncey Fisher (5th with a 7.32 ERA) and Bill Whitrock (11th, 6.65) are also high up the list of worst seasons in Reds history. Another teammate, the awesomely named Ice Box Chamberlain, had the 51st worst ERA. All in all, the Reds finished with a league worst 5.99 ERA as a team. ItÃ¢â‚¬â„¢s worth noting that offense was up quite a bit in 1894. The powers that be had decided that pitchers had too much of an advantage and had just moved the mound back from 50 feet to the present 60Ã¢â‚¬â„¢6Ã¢â‚¬Â. It took a little while for pitchers to adjust and teams averaged nearly 15 runs per game in 1894 Ã¢â‚¬â€œ 44% more than the previous year and far and away the highest ever. 57 players hit .300 or better. The PhilliesÃ¢â‚¬â„¢ starting outfield of Big Ed Delahanty, Sam Thompson, and Billy Hamilton hit .400 combined!

What do Sandy Koufax, Al Kaline, Harmon Killebrew, and Jay Hook all have in common? They were all Bonus Babies, top prospects who were given big bonuses to sign between 1953-1957 and were Ã¢â‚¬â€œ according to the rules of the era Ã¢â‚¬â€œ immediately placed on their teamÃ¢â‚¬â„¢s active roster for at least two years. What do Sandy Koufax, Al Kaline, Harmon Killebrew, and Jay Hook all not have in common? WellÃ¢â‚¬Â¦probably a lot of things Ã¢â‚¬â€œ but letÃ¢â‚¬â„¢s just focus on extended success in the big leagues. Hook was a bust in Cincinnati, appearing in only four games his first two years and then struggling through three more seasons. He spent the majority of the 1961 season sick with a bad case of the mumps that he contracted during a West Coast road trip two weeks after the season started. Unfortunately, Hook didnÃ¢â‚¬â„¢t get sick until after he had exposed everyone else on the team. The resulting inoculations coincided with the start of a nine game winning streak. Something to remember if the 2017 Reds start out slow. Mumps shots for everyone! The Angels had the Rally Monkey; the Royals have the Rally Mantis; weÃ¢â‚¬â„¢ve got the Rally Mumps!

The Mets chose Hock with the 39th pick in the 1961 expansion draft Ã¢â‚¬â€œ one of six Reds selected Ã¢â‚¬â€œ and it was Hook who won the first game in Mets history, tossing a complete game five hitter against the Pirates on April 23rd, 1962. Hook never found much success as a pitcher in the bigs but during the offseasons he first completed his degree in engineering and then a masters degree in thermodynamics from Northwestern University. (Subsequently, his manager with the Mets, the legendary Casey Stengel, nicknamed him Ã¢â‚¬Å“The Professor.Ã¢â‚¬Â Author Robert Lipsyte told a story about how Hook was the rare ballplayer who could explain why a curve ball curves. Stengel cracked, Ã¢â‚¬Å“If only Hook could do what he knows!Ã¢â‚¬Â) Just after reaching enough service time to qualify for a pension, Hook quit baseball and took a job at Chrysler in product development. He went on to have an incredibly successful post-baseball career in management with a couple of other companies and, later, teaching at his alma mater.

ItÃ¢â‚¬â„¢s easy to forget his one season in a Reds uniform but somehow Fogg had the 5th most starts on Dusty BakerÃ¢â‚¬â„¢s first club. If nothing else, he was consistently bad. Fogg gaveÃ‚Â up six runs in four innings in his first start, five runs in three innings in his last start, and generally stunk up the joint in every appearance in between. Despite having a career ERA of 5.03, Fogg made approximately $7.5 million dollars and somehow got the super awesome nickname, Ã¢â‚¬ËœThe Dragon Slayer.Ã¢â‚¬Â Mama, let your sons grow up to be baseball players.

The pre-mentioned Chauncey Ã¢â‚¬Å“Whoa BillÃ¢â‚¬Â Fisher was one of only two Chaunceys to ever play in the Major Leagues. The other, Chauncey Burkham, had one at bat for the 1915 St. Louis Browns. He struck out and was never heard from again.

Here’s the complete list of the top 20 worst ERAs in Reds history: 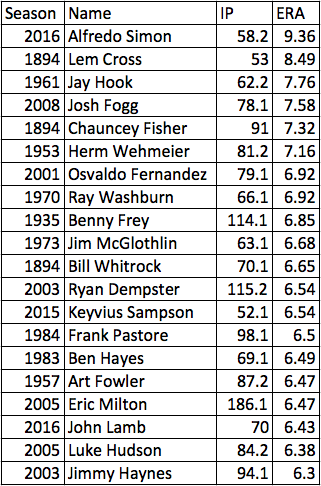 Ouch. There are some names on there that bring up bad memories. Osvaldo Fernandez! Jimmy “Ham Sandwich” Haynes! On top of his 6.54 ERA in 2003, Ryan Dempster also had the 26th worst ERA in club history in 2002. The great Brandon Claussen has two of the worst 30 years, too (2004 and 2006). As you might guess, there are a whole lot more pitchers from the 2000s as you go on. 15 of the 45 worst ever ERAs were from that miserable lost decade including four from 2005 alone! And FYI Ã¢â‚¬â€œ only six of the top 50 had more than 100 innings during their abysmal year. Far and away the worst was Ã¢â‚¬â€œ you guessed it Ã¢â‚¬â€œ Eric Milton and his 186.1 innings in 2005. Just saying that name makes me want to crawl into a fetal position. 186.1 innings with a 6.47 ERA in his first year after signing as a free agent. Sheesh.

So what is the take away from this? Believe it or not, looking up Close, Hook, Fogg, and Fisher gave me a bit of hope. All four of those players didnÃ¢â‚¬â„¢t pitch for the Reds the following year. (Fisher came back in 1896 and was significantly better.) In fact, only one of the players with the ten worst ERAs pitched for the Reds the year after their abysmal season: Benny Frey who posted a 4.25 ERA in 1936 before injuring his arm. (Benny made his debut on September 18th, 1929 and threw his last pitch on September 17, 1936. So close!) The point is, ladies and gentlemen, I think we can safely say that this will be the last month that Alfredo Simon puts on a Reds jersey. Yay history!

Special thank you to SABRÃ¢â‚¬â„¢s Biography Project for the invaluable information about Close and Hook. Also a thanks to Alan SchwarzÃ¢â‚¬â„¢s wonderful book, The Numbers Game.