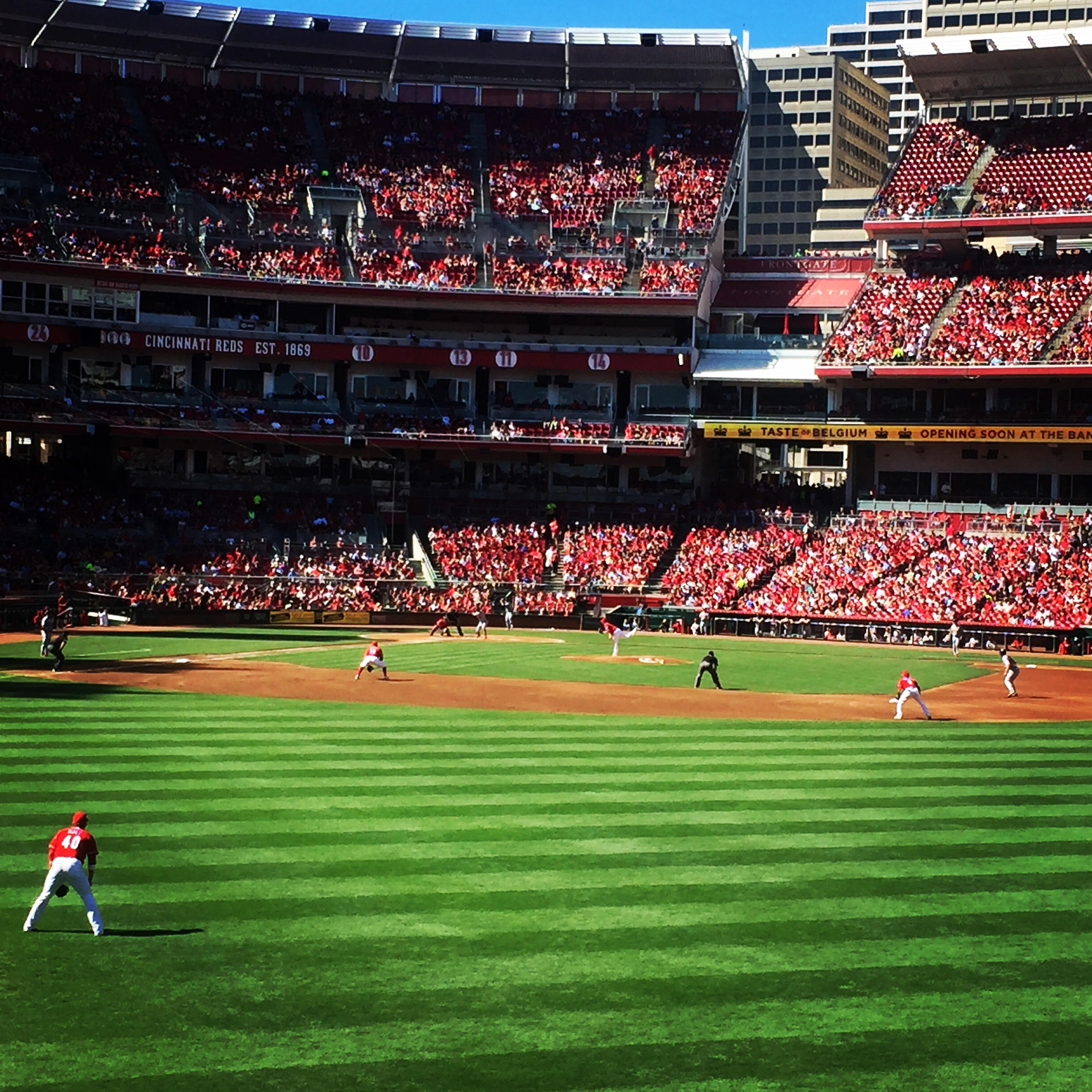 In the recap to Saturday’s game, I gave you a brief rundown about this weekend’s Redleg Nation/Red Reporter Meetup:

Ã¢â‚¬â€œIt really was a fabulous day. The weather was perfect, the company was great, and it was a fun baseball game. The score was tight for a long time, then the Reds pulled away, and a good time was had by all.

Again, IÃ¢â‚¬â„¢ll give a much more detailed recap soon about the Meetup, but I need to go ahead and thank the Cincinnati Reds for the awesome time we had today. The Reds were extremely nice to us, and IÃ¢â‚¬â„¢m very appreciative. They went above and beyond to make our day special, and they really didnÃ¢â‚¬â„¢t have to do that. It was a great time.

As I noted in the recap, I wanted to take a little more time to discuss the Meetup, if for no other reason than to get my thoughts down for the sake of posterity. 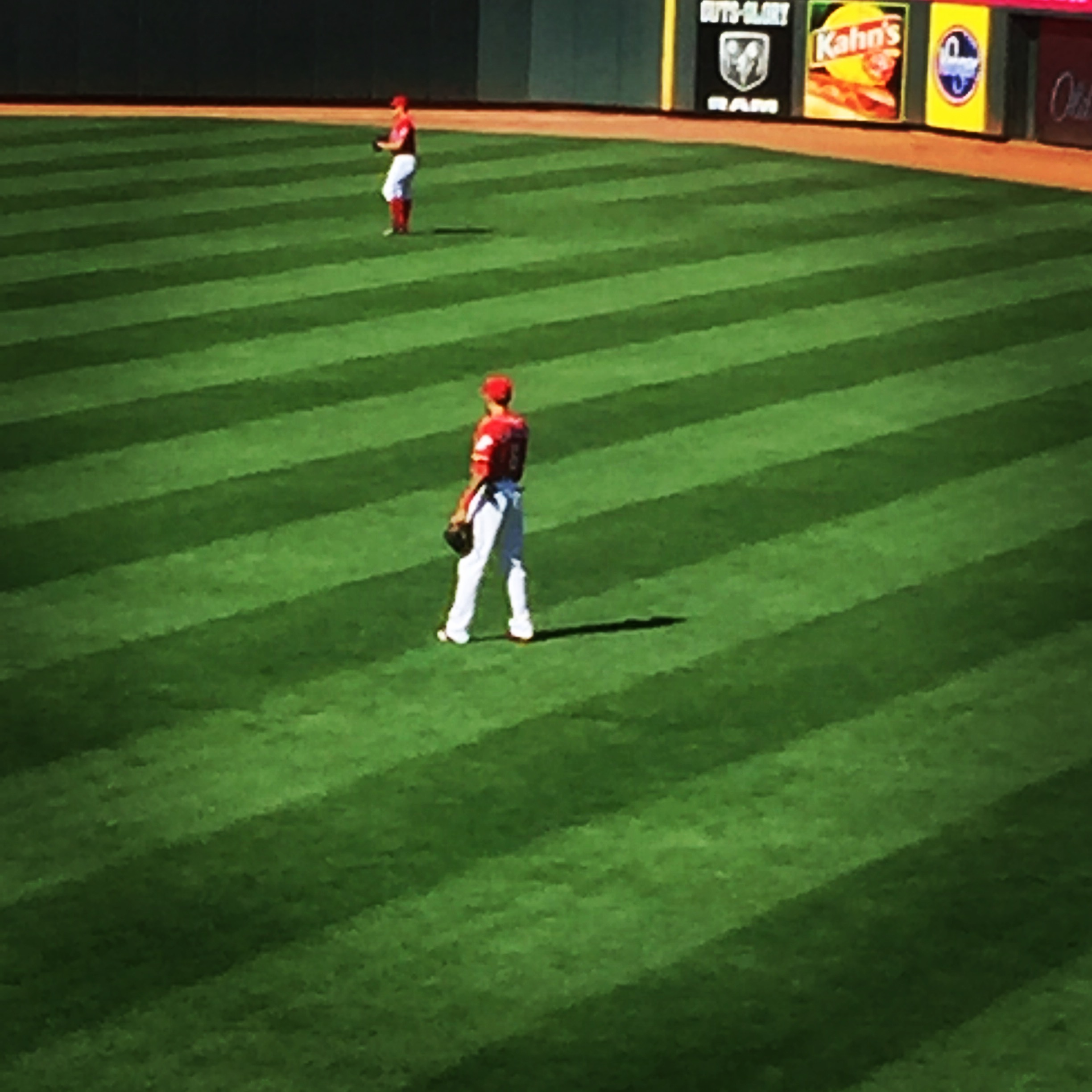 First of all, it really was a fun time, from beginning to end. You know, several years ago, we did one or two of these meetups with RN writers and readers, and while it was a lot of fun, it was kinda informal. The last couple of years, the RN writers had been able to get together at a game, and that has been a blast every time. But it wasn’t really a public thing; just a chance for us to get together and talk baseball without a computer screen between us.

A few weeks ago, Red Reporter’s Brandon Kraeling and I began talking about doing a joint meetup. We were both excited about the possibility. I was particularly interested because (a) it had always been in the back of my mind to have another meetup with RN readers, and (b) I have so much respect for all the awesome work they’ve done at Red Reporter over the years. Brandon and I thought it would be fun to get our two groups together and watch the ol’ Redlegs.

Unfortunately, by the time we started planning, the season was almost over, and we were running short on weekend home dates.* We were kinda forced to settle on September 3, despite the fact that it was opening weekend for college football (which didn’t really matter to me, but I’ve heard your feedback on that point, believe me). It was also a bobblehead game, so that made the ticketing situation a little more difficult, on short notice.

*Note: We’ve already begun planning for a similar — but even better — event next year.

But with few dates to choose from, we chose the Cardinals game. We also chose to pick a date when the weather would be perfect (and it was) and the Reds were destined to win big (and they did). That’s great planning. You’re welcome.

Most of the Redleg Nation writers did get together for lunch — which was a great time, because we have an awesome group here — but before long, it was time for everyone to meet up at Great American Ballpark. The Reds let us in the park before gates were open for the Q&A with Reds Assistant GMs Sam Grossman and Nick Krall. 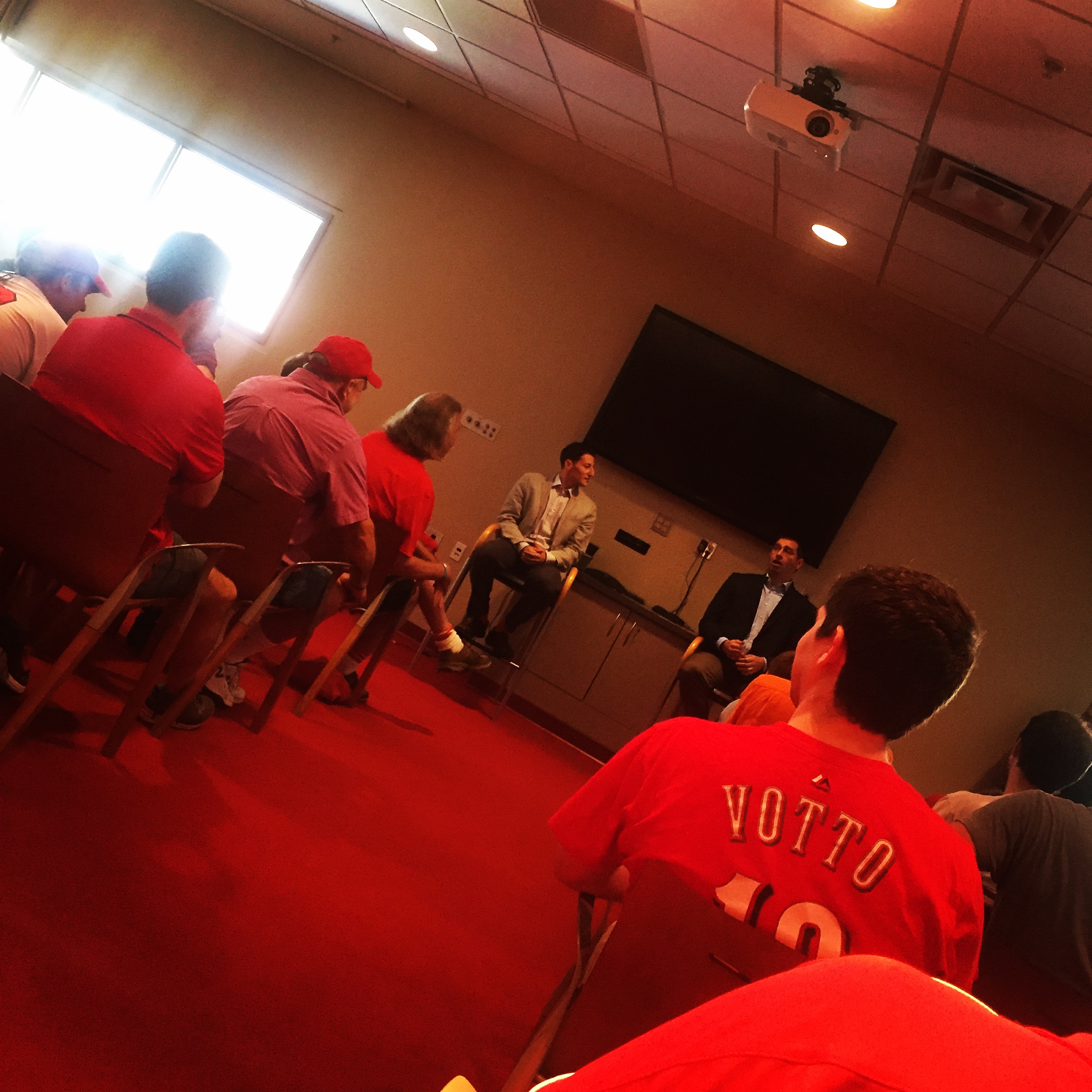 A quick note. Once we started planning this event, the Reds could not have been more helpful and accomodating. I was really blown away by their generosity. Special thanks needs to go out to Cincinnati’s Social Media Superstar (TM) Lisa Braun, who helped coordinate everything from reserving the private room for the Q&A to helping resolve last-minute issues with tickets. Every single time I sent her a frantic message about anything related to this Meetup, she was patient and helpful.

(Please help me return the favor by going to the Reds’ last social media game of the year. PLEASE???)

But it wasn’t just Lisa. Grossman and Krall did not have to donate their time to talking to a bunch of internet nerds — and they certainly didn’t have to let us “backstage,” so to speak — but they were very gracious and answered every single question. Grossman risked being late for a flight in order to talk to us, and Krall stuck around even after Grossman had to leave to answer even more questions about every topic under the Reds sun. (Thanks as well to Jamie Ramsey, who helped to moderate the Q&A. I also appreciate the fact that Enquirer beat reporter Zach Buchanan and ESPN analyst Dan Szymborski stopped by. Thanks, guys.)

I’m pretty sure that everyone in the room came away feeling a little better about the front office’s commitment to analytics, and their willingness to listen to our thoughts and concerns.

So the Q&A was an unqualified success, in my opinion. The game was even better. Between RN and RR, we had about 50 people in our group, and we settled into our sun deck seats for the game. What a game it was, a 9-1 Reds victory over our least-favorite team.

In the seventh inning, we got a little surprise. Reds broadcaster Chris Welsh has long been a friend of Redleg Nation, and he talked a little about us on the Reds’ telecast. Here’s the picture; Chris circled our group and was in the process of talking about RN and RR when Joey Votto got a double and the announcers got a little distracted. (Very inconsiderate of Votto, if you ask me.) 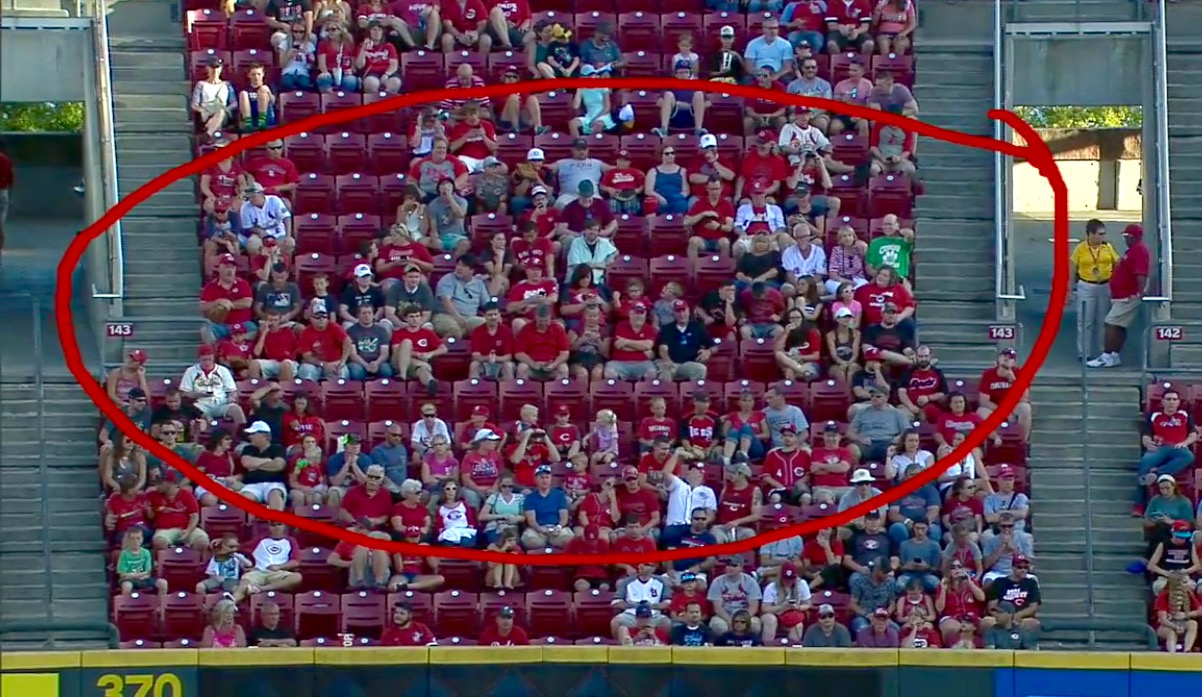 Unfortunately, we didn’t get a picture of our group, as Steve Mancuso suggested (we won’t make that mistake next year), so this one will have to suffice. Even more unfortunately, Fox Sports Ohio settled their cameras on us at almost the exact moment that much of the Red Reporter crew had stepped out, so a bunch of them are missing. But this is the best we can do.

Click on the picture to make it bigger, if you’d like. I’ll let everyone who was there chime in to identify themselves in this picture (if you don’t, I’ll call you out one by one!). I’m almost in the center of the circle (yes, I know it’s an oval, get off my back), the one moron wearing a black shirt on a 400-degree day. I’m talking to my frequent podcast co-host Bill Lack, who I assume is saying something derogatory about a certain Reds second baseman.

So, to sum up: it was a pretty great day. I was really happy to meet some of you who have been faithful readers of our dumb little site over the years. I enjoyed getting to know some of the folks in the Red Reporter community that I hadn’t met before. They’re an awesome group. 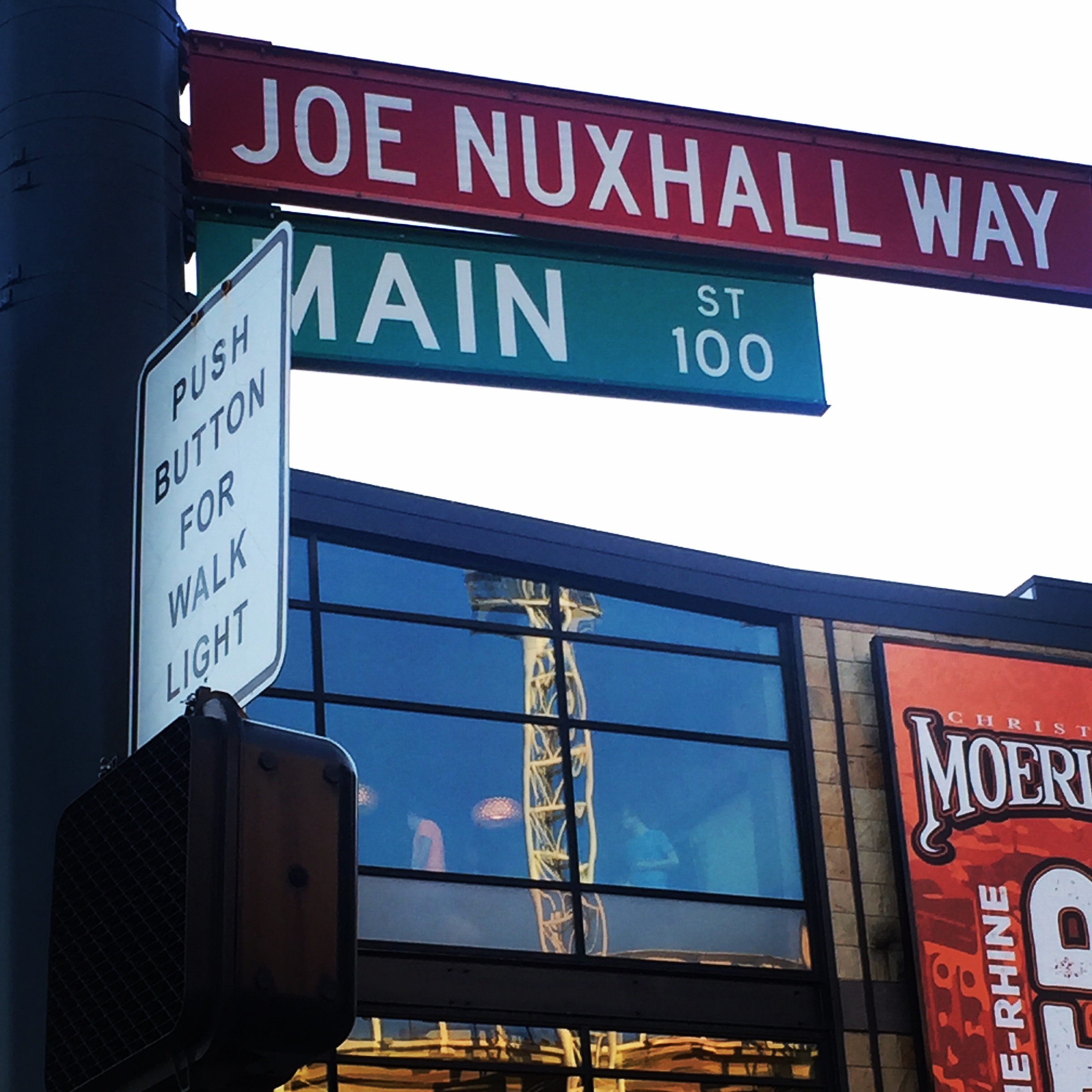 One takeaway was that, in planning for next year’s Meetup, we want to make sure we have more time for the writers and readers to sit and talk and get to know each other. Steve and I both wished we had had more time to mingle. (Also, I promise that we won’t plan this thing at the last minute again next year, so more of you will be able to make plans to attend, I hope.)

You know, I kinda stepped away from Redleg Nation for a while there, over the last couple of years. Life got in the way a little bit (and I really appreciate the work Steve has done during that time — and continues to do — not just keeping the lights on here at RN, but working hard to improve the quality of the day-to-day product here).

Over the last few months, however, I’ve gotten a little re-energized about this community. You know, if you’ve read anything I’ve written here over the last eleven years, that I’m prone to getting a little sappy about baseball. Well, I’m sorry: I think we have a pretty special community here at Redleg Nation. Getting a chance to hang out with some of you this weekend just cemented that in my mind.

I expect to meet all of you at the 2nd Annual Redleg Nation/Red Reporter Meetup next year. That’s an order.