This season has been a roller coaster for Brandon Finnegan. When I wrote my most recent column about him fourÃ‚Â weeks ago, he was among the worst qualified starters in a number of areas (ERA, FIP, xFIP, K%, BB%) after a rough stretch of starts.

But in the month of August, he’s started to show some real consistency, improving in each of those first four categories. His two most recent starts have arguably been the two best of his young career, as he allowed just one hit in seven innings against the Los Angeles Dodgers on Aug. 20 and struck out a career-high 12 batters against the Arizona Diamondbacks on Aug. 26.

In that column, I also talked about the changeup being a crucial pitch for him, as he’s significantly better when he’s throwing it well. Unsurprisingly, the change has been a big reason for his recent success.

As Reds beat writersÃ‚Â C. Trent Rosecrans and Mark Sheldon both wrote about recently, Finnegan has been using a new grip on his changeup (taught to him by Dan Straily) to give him more control of the pitch.

From Finnegan himself (via Sheldon):

“I started off the year well with it and then I hit a spot where I couldn’t stop cutting it. It was like a second slider. To get it back and working — if it wasn’t for Mr. Straily over there — I’d still be without a changeup. I’ve been working hard on it. Every ‘pen I work on it. Hopefully I can keep it going.”

The revamped pitchÃ‚Â been incredibly effective and he’s starting to show the same confidence in the pitch thatÃ‚Â he did at the beginning of the season, when he dominated the Philadelphia Phillies in the second game of the year and took a no-hitter against the Chicago Cubs into the seventh inning. Here’s a look at his usage of the pitch by month: 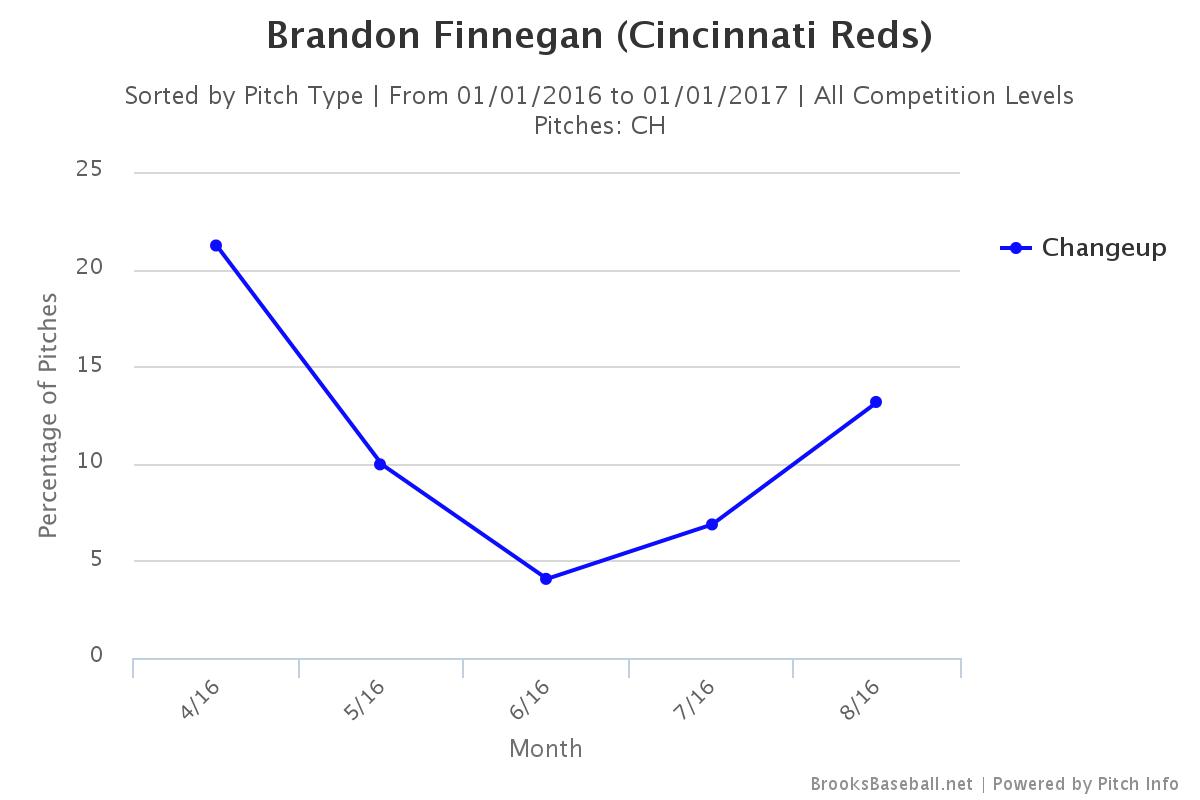 Just how effective has the pitch been for Finnegan? Hitters have had next to no success when putting the changeupÃ‚Â into play this season, batting a mere .105 with a .158 slugging percentage. The average exit velocity against itÃ‚Â has been 80.3 mph, tied for the sixth lowest mark among all pitchers who have had 25 or more batted balls on the change. This month, that number has dropped to a ridiculously low 74.5 mph. For the season, the spin rate on Finnegan’s changeup is 1,660 revolutions per minute, a good bit better than the league average of 1,750 (remember, a lower spin rate for a changeup is good).

Despite all of this, his whiff rates on the pitch have been mediocre, sitting at 15.3 percent for the season — exactly in line with the league average. Until recently, that is. In August, that number has jumped to 26.3 percent. 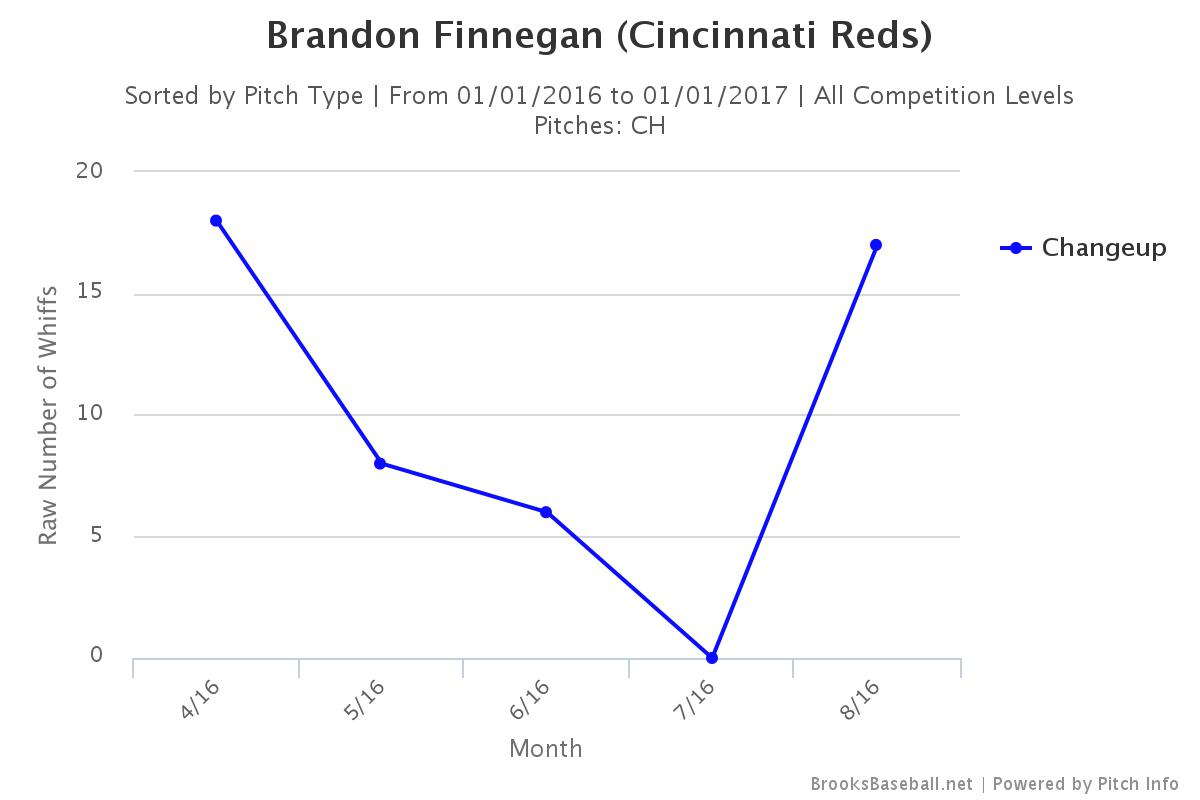 Regaining control of his putaway pitch has fueled Finnegan’s success. His strikeout rate has jumped to 26.9 percent this month, far better than his previous monthly high of 19.0 percent back in April. As a result, his numbers across the board have gotten better, as he’s posted a 2.67 ERA, 4.47 FIP, and 4.04 xFIP in five starts this month.

Overall, his stat line still isn’t pretty and his high walk and home run rates haven’t come down at all. But what’s important isÃ‚Â the 23-year-old has shown real progress with his performance over the last four weeks. If he can continue to keep hitters off balance with the changeup to supplement his sinker and slider, he should continue to get better.

The last time I wrote about Finnegan, the question I asked was, “Can he stick as a starting pitcher?” At the time, the answer was a resounding “I don’t know.” There’s still plenty of uncertainty in answering that question, but his recent development has him trending in the right direction.