The Reds offense struggled last night, scoring just once through the first eight innings. By the time the Reds finished hitting in their half of the second inning tonight, they had already scored nine times. The Reds would go on to rout the Diamondbacks 13-0, and will go for another series win tomorrow.

The Reds offense was lead by Scott Schebler. He had two home runs in the first two innings of this game, driving in five runs. Joey Votto got the Reds on the scoreboard in the first inning, when he hit his 21st home run of the season. Anthony DeSclafani didn’t allow the big early lead to water down his performance. Disco dominated the Diamondbacks, and threw the first complete game shutout for the Reds since Johnny Cueto in July of 2015. 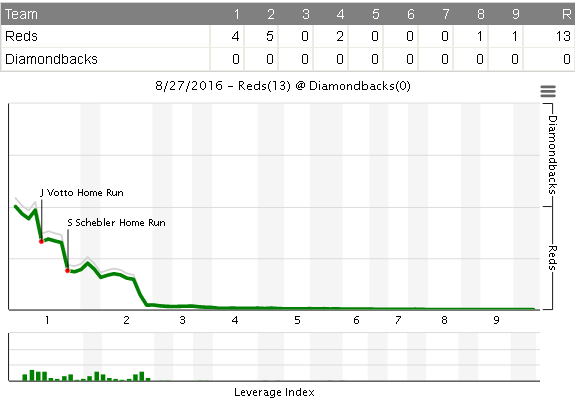 According to Fangraphs WPA statistic (winning percentage added), the most important play of the game was Joey Votto’s 2-run home run with 1 out in the 1st inning, giving the Reds a 2-0 lead. That play increased the Reds chances of winning by 15.2% (from 51.8% to 67.0%).

Schebler absolutely murdered the first home run he hit in the first inning. He sure is a fun player to watch. I think he could end up being a 4th OF/platoon guy for the Reds in the future. He had a monster night.

Poor Anthony DeSclafani. He goes the distance, throwing the Reds first complete game shutout since Johnny Cueto in July of 2015, and doesn’t even get named my player of the game. It’s just hard to beat a guy who has two bombs and a much higher WPA. Anyway, Disco was absolutely brilliant. I love that he didn’t let up for a second with the big lead. I’ve never understood that Jack Morris mindset. Disco’s final line: 9.0 IP, 4 H, 0 R, 1 BB, 9 K, 1.48 FIP.

Joey Votto hit his 21s home run of the season, and went 2 for 4. He got the night off early with the Reds big lead. Votto has now reached base in each of his last 20 starts, and 39 of his last 40 starts (he failed to reach base in a pinch-hit appearance on 8/21).

Zack Cozart reached base three times (2 hits, 1 walk) in his first start in 11 days. One of those hits was his 16th home run of the season. It was good to see Zack back, and contributing right away.

Brandon Phillips went 3 for 4 tonight. He was also given the night off early.

Adam Duvall hit his 29th home run of the season. It’s pretty crazy that the “throw in” piece to the Mike Leake trade is on the verge of 30 home runs in the big leagues.

Jose Peraza entered the game for Phillips, and in his only at-bat singled. The Reds gotta find a way to get him in the lineup. I had suggested yesterday having him rotate between LF, RF, 3B, SS, and 2B. Just give those guys a day off every five days.

Yup, nothing to see here.

Ya, the Chapman trade was bad, but 1 out of the last 6 big trades failing is a pretty good percentage.