Homer Bailey and Johnny Cueto are undoubtedly two of the most successful pitchers in recent Reds history.

The former has tossed two no-hitters — one of only 26Ã‚Â pitchers in baseball history to do so — and the latter is one of the Reds’Ã‚Â all-time greats.

Neither of their careers started out very well, though.

From the time he was selected with the seventh overall pick in the 2004 draft, Bailey was the Reds’ top prospect and was ranked as high as No. 5 in the game by Baseball America. The club put him on the fast track to the major leagues and he debuted three years laterÃ‚Â at age 21. RushingÃ‚Â him to the big leagues proved to be a poor decision and the right-handerÃ‚Â suffered because of it initially. Through the first 78 starts of his career, which took him through the 2011 season, he posted a 4.79 ERA, 4.35 FIP, and a 4.25 xFIP.

ButÃ‚Â everything came together for him in 2012. Bailey posted his first season with an ERA, FIP, and xFIP below 4.00 and did the same the next two seasons, becoming a key figure in the Reds’ dominant starting rotations in those years. After missing most of 2015 and half of 2016, he’s back and looks to be regaining old form.

Unlike Bailey, Cueto wasn’t a top prospect from the moment he signed with the Reds. But he did start to gain some attention when he dominated three levels of minor-league baseball in 2007. After that season, he was ranked the Reds’ fourth-best prospect and No. 34 in all of baseball. He made the Opening Day roster in 2008, but struggled through his first two seasons,Ã‚Â postingÃ‚Â a combined 4.61 ERA, 4.79 FIP, and 4.41 xFIP.

Like Cueto, Bailey, and many, many, many other young pitchers before him, highly touted prospect Cody Reed has gotten off to a rockyÃ‚Â start in his major-league career.

Coming off of a breakout 2015 season, Baseball America named him the Reds’ second-best prospect behind Robert Stephenson and the No. 34 prospect in their top-100 list. The southpaw debuted in June, but was demoted last week after making just 10 starts, only two of which were designated as “quality.”

The team did not win a single game in which he started, as he struggled his way to a 7.36 ERA, 6.06 FIP, and 4.31 xFIP. He also allowed an eye-popping 12 home runs in 47 1/3 innings, overÃ‚Â two per nine innings. More than one-fourth of the fly balls he allowed ended up in the seats, with a ridiculous (and unsustainably high) 27.9 percent home run-to-fly ball ratio. This, of course, is the reason we see such a large discrepancy between his FIP and xFIP, as the latter factors in league average HR/FB rate, which is currently 12.9 percent.

As with pretty much all pitchers who struggle, Reed’s problem has beenÃ‚Â with command. Although his walk rate was right around league average (8.3 percent), he walked at least one batter in nine of his 10 starts and issued multiple free passes in seven outings. Part of his problem is that he was pitching from behind in the count quite a bit, only throwing a first-pitch strike 59.1 percent of the time, more than one percent lower than the league average (60.2%). As the high home-run rates indicate, the rookie missed in the zone a whole lot, too.

Here’s a look at the heat maps for his two primary pitches, the four-seam fastball and the slider: 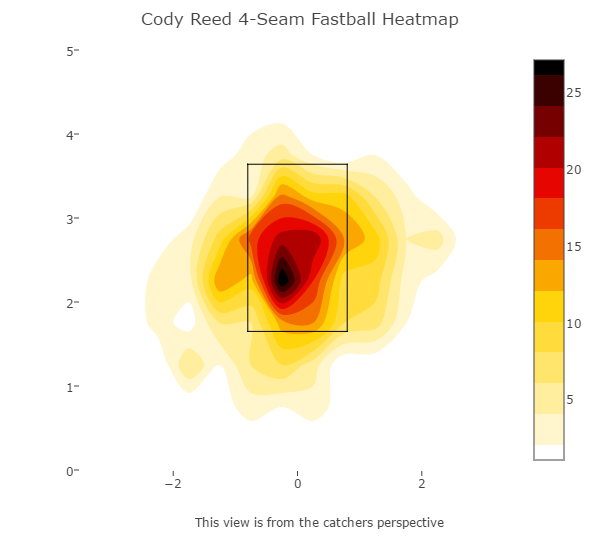 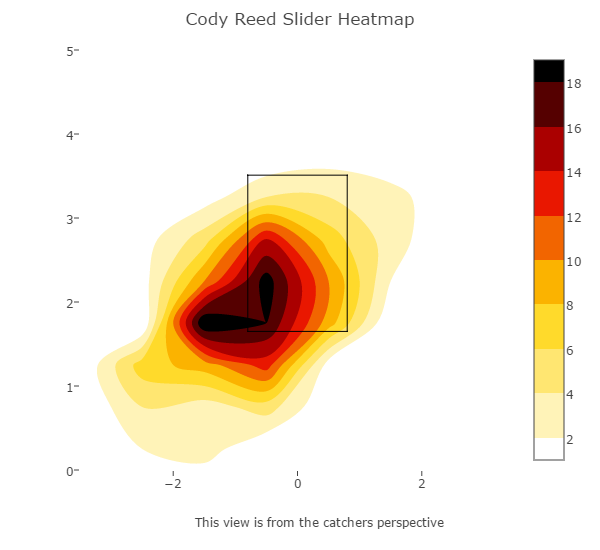 On the left is Reed’s fastball, which has been hisÃ‚Â least effective pitch. The velocity on his four-seamerÃ‚Â isÃ‚Â solid, averaging 92.8Ã‚Â mph in his 10 starts, per PITCHf/x. Among left-handed starters with 40 or more innings this season, Reed’s average fastball speed is 11th, just 0.1 mph slower than Clayton Kershaw and David Price.Ã‚Â The rookie hasn’t had anywhere close to the same success as those two all-stars, however.

A look at the heat map paints a pretty clear picture: Reed simply missed down the heart of the plate far too much, and he paid for it. When putting the pitch into play, opposing batters hit .374 with a .713 slugging percentage, along with an average exit velocity of 91.9 mph. For context, the league average for pitchers is 90.5 mph. Unsurprisingly, of the 12 homers he allowed, 10 came on the heater.

For further illustration of this, the chart below breaks down opposing hitters’ isolated power (slugging percentage – batting average) by zone against Reed’s four-seamer. The results aren’t all that surprising: 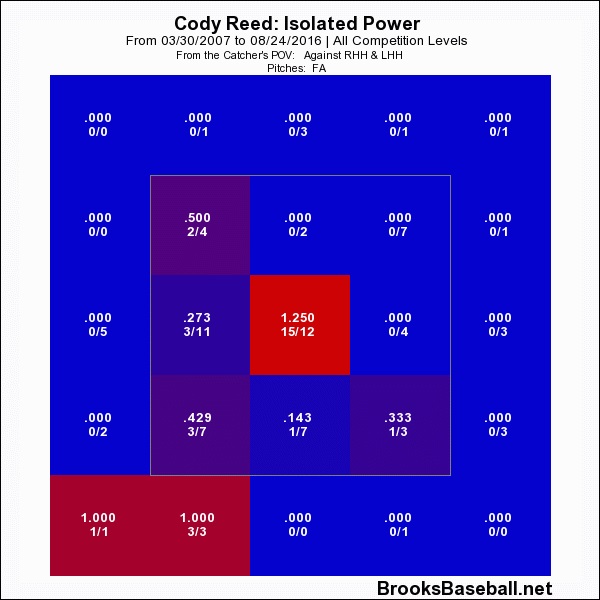 Reed didn’t fare much better with the slider, which has been a devastatingÃ‚Â pitch throughout his professional career. Opponents batted .333 and slugged .508 against it. His control was much more erratic with the slider, missing both too far inside and inÃ‚Â the middle of the inner part of the strike zone — a sweet spot for right-handed hitters, in particular.

Here are the ISO charts against Reed’s slider, broken down by batter handedness since the pitch is used differently against the two groups. Unsurprisingly, when the pitch was kept down in the zone, he had success. When he didn’t, well… 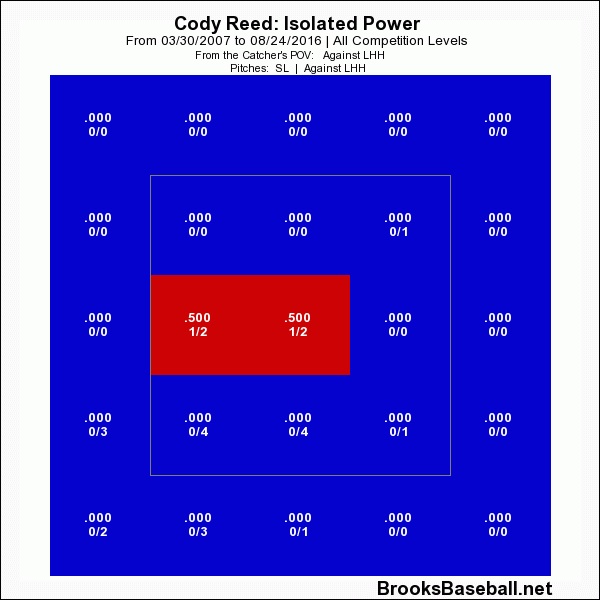 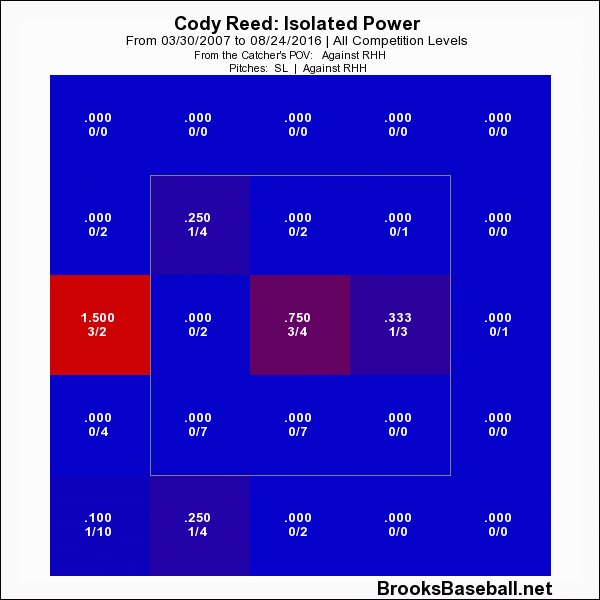 It wasn’t all bad news for Reed, however.

The best pitch for the rookieÃ‚Â in hisÃ‚Â first big-league stint was actuallyÃ‚Â the one that scouts said needed the most work. Although it was his least-used pitch, theÃ‚Â change-up proved to be the lefty’s most effective offering, with hitters managing just three singles in the 27 at-bats they put it into play. Even more impressive, his change-up is the only pitch with an above-average swing-and-miss rate:

Another aspect of Reed’s performance to be encouraged about is his ground-ball rate, which was 55.2 percent, according to Statcast data. That number would play very well in the long run, particularly in Great American Ball Park.

While Reed’s first taste of the majors didn’t go the way he, the Reds, or the fans wanted it to go, it’s important to keep things in perspective. He’s only 23 years old and has plenty more learning and developing to do. The talent is there; it’s just a matter of putting it all together against big-league competition.Ã‚Â Will heÃ‚Â ultimately go on to be the top-of-the-rotation pitcher many think he’s capable of being? Only time will tell. But there’s also no reason to give up on the kid after 10 or 20 or even 50 starts. Just askÃ‚Â Homer Bailey or Johnny Cueto.