Dan Straily was locked into a pitchers duel with Derek Holland through the first five innings tonight. Both pitchers had held their opponent scoreless. Straily survived the top of the sixth inning holding the Rangers scoreless, but was lifted in the bottom of the inning for a pinch hitter.

Joey Votto drove in the first run of the game in the bottom of the sixth, allowing Dan Straily to win this pitchers duel. Tucker Barnhart added another RBI hit in the seventh inning, and Votto had a sac fly in the eighth.

It was not always easy, but Raisel Iglesias and Tony Cingrani finished off the Rangers the rest of the way, and the Reds took the first game of this short two game series 3-0. 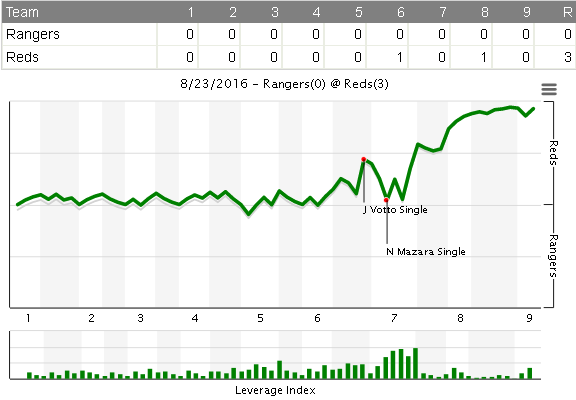 According to FangraphsÃ‚Â WPA statisticÃ‚Â (winning percentage added), the most important play of the game was Joey Votto’s RBI single off Derek Holland with 2 outs in the 6th inning, giving the Reds a 1-0 lead.Ã‚Â That play increased the Reds chances of winning by 16.7% (from 55.3% to 72.8%). 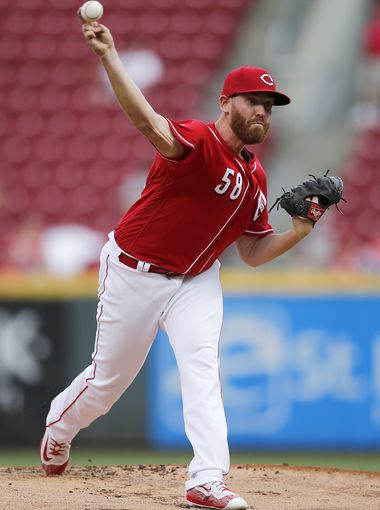 Straily was very good again for the Reds tonight. He has now allowed 3 ER or less in 10 consecutive starts, and they are all considered quality starts with the exception of one start where he pitched 5.1 innings. In his last four starts, he now has 22 strikeouts to just 2 walks. Straily has a 3.57 ERA/4.43 FIP through 151.1 IP this season. It’s hard to believe the Reds picked this guy up off the scrap heap right before the season started.

Joey VotoÃ‚Â had two more hits tonight, and an RBI sac fly. Votto has reached base in 33 of the last 35 games (one of those games he only had one pinch-hit PA). I’ll say it…..Joey Votto is at this point in his career the greatest Reds offensive player ever. Period.

Billy HamiltonÃ‚Â is just….well Billy Hamilton. He made an incredible diving catch in the 6th inning. I’ll just let the GIF below do the talking.

Raisel IglesiasÃ‚Â got himself into a jam in the 7th inning with runners on 2nd and 3rd with only 1 out. Iglesias then proceeded to strike out Jurickson Profar and Ian Desmond to end the threat. Iglesias then pitched a perfect 8th inning, retiring the heart of the Rangers order.

Jose PerazaÃ‚Â had two more hits today, and he is now a ridiculous 11 for 19 since being recalled. The Reds have to find a way to play Peraza everyday in the big leagues. He is at the very least….very exciting.

Tucker BarnhartÃ‚Â had an RBI double in the 7th inning.

Joey VottoÃ‚Â did make a pretty poor decision trying to score from first base in the 4th inning. He was out by a mile.

Tony CingraniÃ‚Â did get the save, but he walked two batters. That’s just not a recipe for success.

–All three Reds runs scored tonight were the result of a walk. Walks are important, folks.

–Always good to get a Reds game in well under three hours. Especially during a rebuild.