The title of this piece is a prediction, rather than an exclamatory remark.Ã‚Â  I am, of course, talking about a Rawlings Gold Glove Award.Ã‚Â  Billy Hamilton deserves to win one this year.Ã‚Â  Hopefully after reading this you’ll agree!

To start, I think it is important to say Billy Hamilton is somewhat of a savant in center field. As a converted middle-infielder, his prowess in center becomes even more amazing.Ã‚Â  It isn’t often I use the word “love” to describe something in baseball, but I love watching Billy patrol the outfield; I can’t get enough of it.

A Gold Glove Award would only validate what we, as intelligent Reds fans, already know; Billy is the best.

Here are the pertinent stats for Billy and his competition so far in 2016: 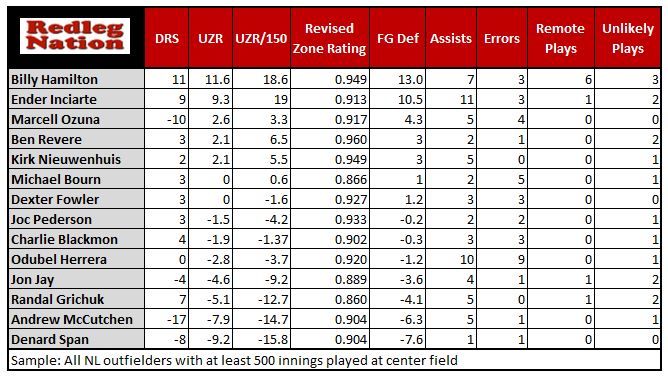 The table is sorted by UZR.Ã‚Â  You’ll notice Billy leads everyone in both Defensive Runs Saved (DRS) and Ultimate Zone Rating (UZR).Ã‚Â  These are the two “catch-all” defensive stats that attempt to describe the amount of runs a players has saved (or costed) his team above an average player at that position.Ã‚Â  UZR/150 is simply a normalized version of UZR to account for playing time differences.Ã‚Â  You see here that Ender Inciarte leads this category.Ã‚Â  He’s been good this year, as well.

If we look at more traditional stats, like outfield assists and errors, we see Billy has the 3rd most assists (7), and only 3 errors, which is about average.

The column called Revised Zone Rating is a measure of the frequency with which each player makes plays.Ã‚Â  Billy’s 0.949 means he’s made successful plays on 94.9% of the balls hit into his zone (center field).Ã‚Â  Billy is tied for 2nd with Kirk Nieuwenhuis, and trails Ben Revere by only 1.1%.Ã‚Â  Revere’s RZR of .960 is actually pretty astounding if you go look at historical data.Ã‚Â  But, fortunately for Billy, Revere’s other stats aren’t that outstanding.

Notice how Billy stacks up in these categories.Ã‚Â  Billy has made 6 remote plays; twice as many as everyone else combined. Amazing.Ã‚Â  He’s also made more unlikely plays than anyone else.

Perhaps this is a weak year in CF, I don’t know, but Billy seems to be the clear choice, with Inciarte being his only real competition.

(Note: San Diego’s Travis Jankowski is having a fantastic season, actually leading UZR/150 by a wide margin.Ã‚Â  However, it appears as if he won’t get the necessary 690 innings played in CF by the September 8th deadline for eligibility.)

With that said, let’s see how the voters have done in the past.Ã‚Â  Here are the former Gold Glove Award winners over the past decade:

Inside Edge Fielding data is only available since 2012, hence the oddly placed RLN logo.Ã‚Â  There are some extremely good seasons on this list, led by Carlos Gomez’s 2013 campaign.Ã‚Â  Who can forget this, after all? I was angry about that for weeks, it seemed.

By the end of the year, Billy’s DRS and UZR will probably be around the 17-18 range, putting him solidly in line with the deserving past winners.

Speaking of deserving winners…sometimes the voters just get things wrong.Ã‚Â  Notice Nate McLouth’s 2008 season.Ã‚Â  He was, objectively, one of the worst outfielders in all of baseball.Ã‚Â  In fact, a simple Googling of “how did nate mclouth win a gold glove” finds a nice article from Bill James Online explaining the lunacy of it all.Ã‚Â  Also, Andrew McCutchen and Matt Kemp were pretty terrible.Ã‚Â  This lends a lot of credence to idea that offense certainly plays a role in voter’s minds.Ã‚Â Ã‚Â  Thankfully for Billy, McCutchen isn’t having a good year at the plate, Pollock and Lagares were injured, Gomez is in the American League and was designated for assignment, and Matt Kemp does things like this.

Without any clear-cut competition, and with the past winners all falling from grace, Billy is going to win his first Rawlings Gold Glove Award this year.Ã‚Â  Take that to the bank!

To visualize Billy’s insane dominance in catching hard-to-catch balls, I pulled the data for all qualified CFers from both leagues since the beginning of recorded time (turns out to be 2012…) for IE’s Remote and Unlikely Plays categories and plotted them against each other!!Ã‚Â  Here’s what it looks like: 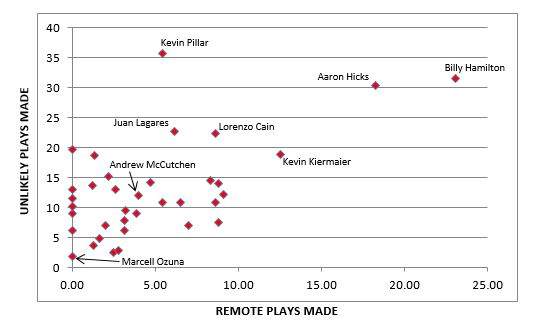 Probably, I should note that I normalized all the data to control for the amount of chances each player had.Ã‚Â  I feel like that is sporting of me.

Here’s the same chart with some poorly drawn lines showing the average, as well as 1, 2, and 3 standard deviations above average. 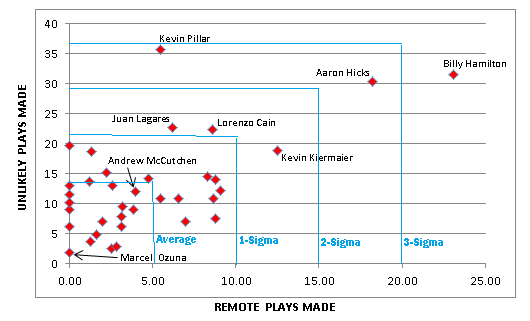 Billy sure is something else.

Author’s Note: This is my last Fridays Above Replacement column.Ã‚Â  I have been unable to put in the amount of effort needed to keep doing articles I am proud to put my name on week-in and week-out.Ã‚Â  I’d like to thank Chad and Steve for giving me the opportunity to regularly write for Redleg Nation, and I’d like to thank all of you for reading and commenting.Ã‚Â  I’ve enjoyed all the interaction a great deal; even when people don’t agree!Ã‚Â  I will try to write a piece every so often, so this isn’t goodbye, just “see you later.”

Author’s Second Note: All data was pulled from FanGraphs and is courtesy of FG, Inside Edge Fielding, The Fielding Bible, and Baseball Info Solutions.