This is my last Billy Hamilton-related post for the foreseeable future, I promise. And this one really isn’t about how awesome Billy is. It’s about other stuff, too. No, really…I mean it!

Hamilton, Cincinnati’s center fielder, has kinda been the talk of the town lately. I accept a tiny part of the blame and/or credit for that, depending on what you think of Billy. Back in June, I told you that he’d be an All-Star within two years, and that he’s better than you think.

A month ago, I explained why he was my new favorite player. I talked about him glowingly on our most recent podcast, and on an earlier episode, I declared that Billy Hamilton is a comic book superhero.

Okay, I know I’m something of a broken record on this point. If I’m not careful, my entire reputation as a baseball writer* is going to depend on whether Hamilton turns out to be as good as I think he will be. Suffice to say that Hamilton has made true strides at the plate across the board this season; his OBP is .319, and when you consider his elite defense and baserunning, I believe the evidence is there to establish that Hamilton — at age 25 — is an above-average big league center fielder.

*Haha, the joke’s on you! My reputation as a baseball writer is already in the toilet!

I wanted to look at Billy’s ability to collect stolen bases within the context of Reds history. Over at the Enquirer, Zach Buchanan noted that he’s shooting for the Reds’ record:

It seems ridiculous. Cincinnati Reds speedster Billy Hamilton leads the majors with 51 bases, but he’d need 30 more to do it. With 48 games left, surely the franchise record of 81 – set back in 1911 – is safe at least for the remainder of the season.

Then again, maybe not. Hamilton certainly has his eye on it.

“That’s a possibility,” Hamilton said. “That’s where I want to be. That’s something between me and a few teammates, that I do want to get to 80 or in that area.”

I wouldn’t put it past Hamilton, but breaking the franchise record for stolen bases is a pretty tall order. Here’s the Reds’ all-time list for most stolen bases in a single season: 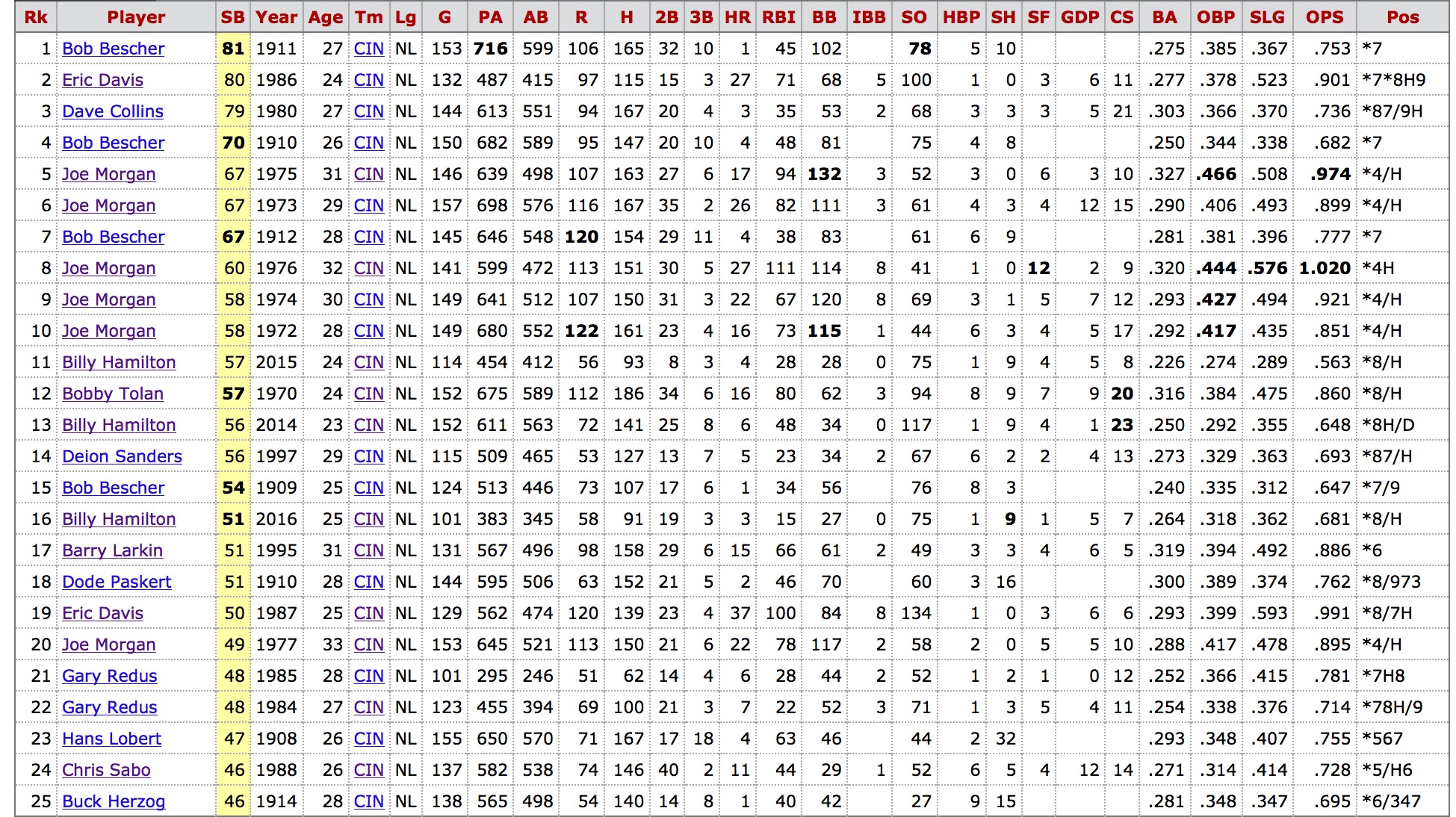 Click on the image to make it bigger, if necessary. What it shows is that Hamilton already has three seasons within the top 16 in Reds history. If he can get four more this year — which seems likely, assuming yesterday’s right knee contusion doesn’t force him into an extended absence — Hamilton will have collected three seasons that are among the 15 best in Reds history for stealing bases. (And he’s only 25.)

The record holder, of course, is Bob Bescher, who stole 81 bases for the Reds back in the dead-ball era of 1911. Bescher has four of the top 15 stolen base seasons in franchise history, including three of the top seven. But Bescher isn’t atop the following chart, which lists the Reds’ career leaders in stolen bases: 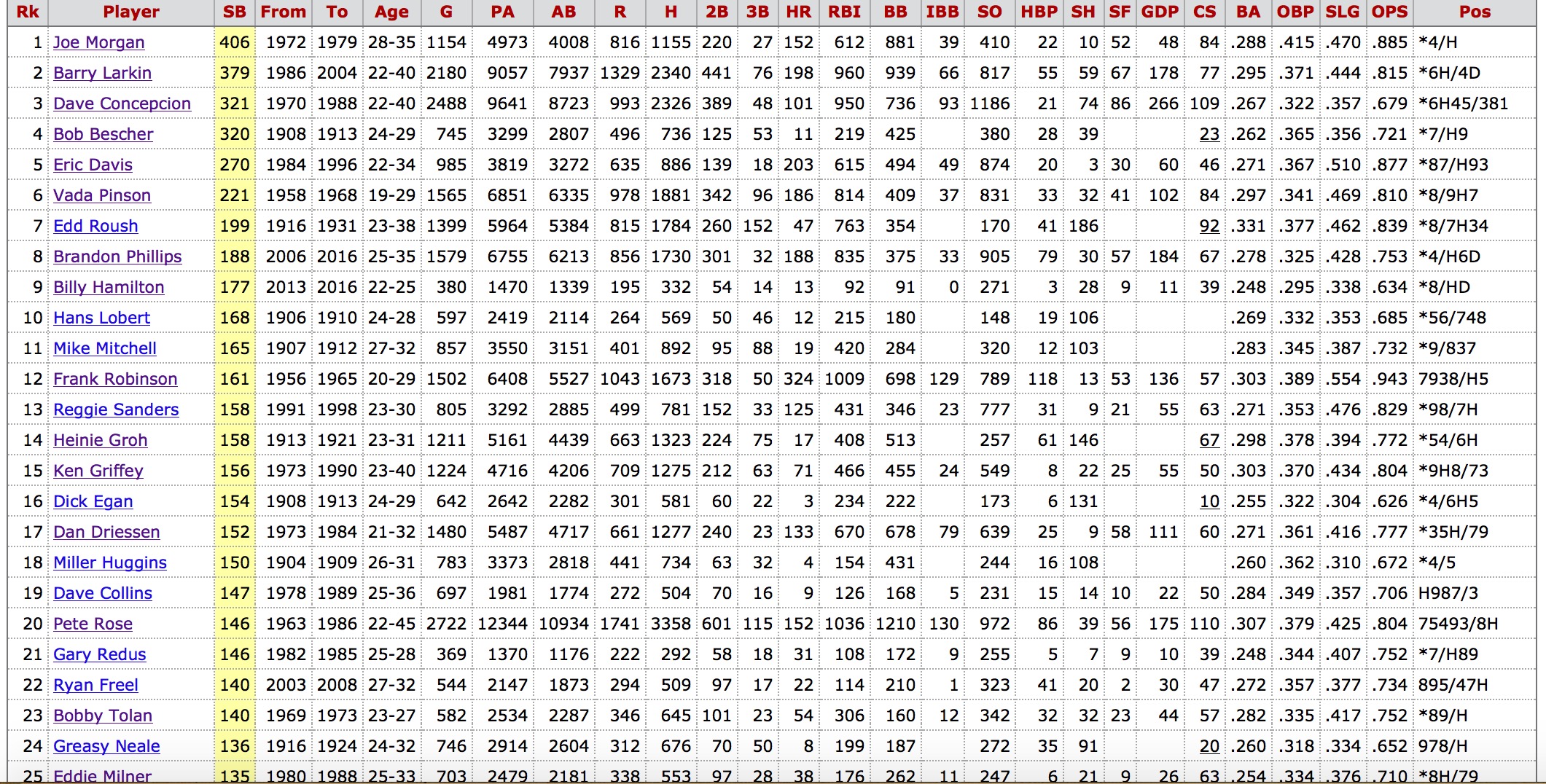 Joe Morgan was amazing, obviously, as were Barry Larkin and Eric Davis. But two current Reds are in the franchise top ten: Brandon Phillips, who is 92 years old, and Billy Hamilton, who is just 14.* Just this year, Hamilton has passed up 17 players on the all-time Reds list, including guys like Frank Robinson, Eddie Milner, Ryan Freel, Pete Rose, Ken Griffey, and the immortal Dick Hoblitzell.

*Ages are only estimates.

He’s likely to pass up Phillips this season, and Hall-of-Famer Edd Roush is clearly within his sights. By the end of next season, presuming health and continued improvement at the plate — and even I will admit that these are not sure things at all — Hamilton could be challenging Eric Davis for the top five in Reds’ history for successful stolen bases.

That’s incredible to me, since we’re talking about a 25 year-old kid.

Is Hamilton going to break Bescher’s single-season stolen base record? Well, probably not this year, even if the injury suffered yesterday is minor. Hamilton would need 31 more steals in just 47 games. After watching him get three and four steals in some games recently, that doesn’t sound like too much to ask, but let’s not bet the ranch on that one, either.

Maybe it won’t happen this season, but should Hamilton continue to progress at the plate as he begins to enter his prime years, I feel pretty confident that he’ll get there one of these years. And if Hamilton can somehow, some way, figure out how to get on base at a .340 clip? Well, he’ll steal more than 100 bases, and will be a candidate for National League Most Valuable Player.

Joe Morgan’s career stolen base record of 406 may be out of reach for Billy. After all, Morgan did win NL MVP, twice, and with an on-base percentage of .415 during his time in Cincinnati, Morgan had a lot more opportunities to run wild on the basepaths than Billy is likely to see.

Then again, I refuse to say definitively that anything is out of Billy Hamilton’s reach. The kid just keeps improving.*

*Okay, I lied. I’m going to definitively say that Hamilton won’t match Morgan’s .415 OBP. But can you imagine if he did? Hamilton would steal 200 bases in a season.

For the record, we can talk all day about the value of the stolen base in today’s game — and whether the Reds are over-emphasizing the steal in their rebuilding process — but I’m not interested in that question today. (Okay, I actually am interested, but it’s not the point of this piece.) This isn’t intended to be a serious sabermetric study, it’s just an attempt to put what we are seeing from Billy Hamilton this season within some sort of historical context.

And it provides yet another reason to keep watching Hamilton with interest. Hamilton says he’s shooting for the record, not to mention triple digits in stolen bases. Who knows how high Billy can fly?