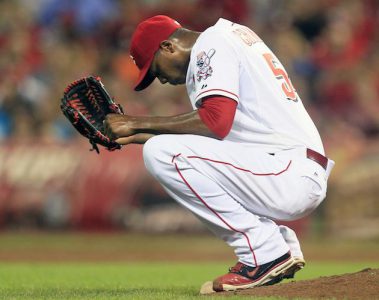 Remember Aroldis Chapman? He was good.

For a long time, especially on our podcast, I’ve been lamenting the fact that Aroldis was never really given an opportunity to be a starter for the Reds. Yes, I know he started in spring training for three consecutive years, but it’s the biggest “what might have been?” in recent Reds memory.

Honestly, I need to forget about this and move on. It’s probably evidence of some kind of mental disorder that I can’t stop thinking about how valuable Chapman would have been as a starter for our Cincinnati Reds.

Chapman has moved on, and I thought I had put all this behind me. Well, recently I was doing some research on Chapman (for a project that will be announced soon), and something I saw caused me to do a double-take.

It has been my theory for some time that Dusty Baker got into Chapman’s head and convinced him that he needed to be a reliever. Certainly, it was the best thing for Dusty’s job security at the time that Chapman be his closer, or at least it was reasonable for Dusty to think that — even if it wasn’t the best thing for the Reds, long-term.

I’m sure you remember when Chapman declared that he wanted to be a closer. It wasn’t always thus.

Here’s a piece from Sports Illustrated back in 2009, after Chapman defected from Cuba:

Chapman expresses reluctance to move to the bullpen, though he worked as a closer for part of the 2006-07 National Series season. “It went OK, but I like being a starter better,” he says. “The difference in starting the game is that you can impact the game greatly. You can pitch a lot of innings. As a closer, you only get one or two innings. You pitch more frequently, but I don’t have a lot of interest in being a closer.”

Aroldis understood why being a starter was more valuable than closing! What happened?

I almost wish I hadn’t read that quote. Now I’m obsessing over the idea of Chapman as a starter once again.