May 18, 2016: Raisel Iglesias, Anthony DeSclafani, and Homer Bailey are all on the disabled list; Jumbo Diaz and Keyvius Sampson areÃ‚Â recalled to the big league club; J.J. Hoover is in Louisville; Steve Delabar had walkedÃ‚Â four straight batters with two outs and the bases loaded the night before; and Fox Sports’ Dieter Kurtenbach callsÃ‚Â the Reds bullpen “borderline unwatchable” and says it “could be the worst in baseball history.”

August 5, 2016: Anthony DeSclafani and Homer Bailey have rejoined the rotation; Raisel Iglesias along with Michael Lorenzen are shoringÃ‚Â up the bullpen; Keyvius Sampson isÃ‚Â on the big league roster despite not having pitched since July 23; J.J. Hoover is still in Louisville; Steve Delabar is in Japan; and Brandon Finnegan and the “borderline unwatchable” bullpen shut out the Cardinals yesterday.

The Reds pitching staff is no longer “the worst in baseball history;” now it’s just your average, everyday bad.

Between May 18 and August 5, the Reds bullpenÃ‚Â cut 1.25 points from their ERA and moved safely away from the 1930 Phillies record-setting 8.05 mark.Ã‚Â TheyÃ‚Â still have the worst bullpen ERA in all the majors at 5.21 AND the thirdÃ‚Â worst starter ERA at 5.13, but there’s nothing historic about either of those numbers, which feels a bit like a victory.

Steve went over the non-improvement improvement of the bullpen last week, concluding: “The Reds bullpen has snapped out of its April/May death spiral. Over the last 30 days or so they have been functioning approximately as a normal, league-average pen, although not quite.” The cause of the shift? “The performances of Raisel Iglesias and Michael Lorenzen replacing those of J.J. Hoover and J.C. Ramirez.”

But while the bullpen took the majority of the headlines at the start of the season, as mentioned before, the starters haven’t been that much better.Ã‚Â And to be honest, they still aren’t that good. 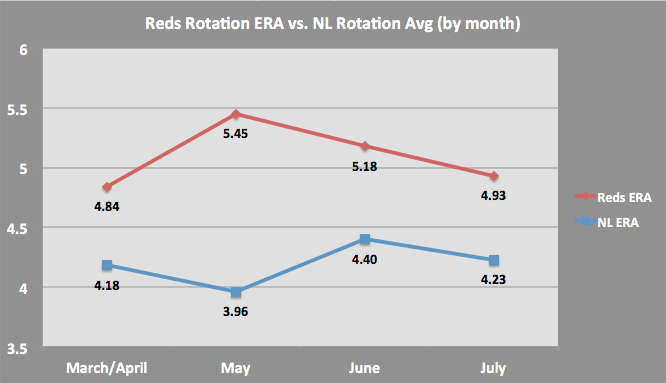 By ERA, the Reds starters have been about 0.70 above the NL average all season, doubling that margin duringÃ‚Â a rather horrendous May. But as we all know, ERA isn’t always the best measure of a pitcher’s worth.

Sadly, more accurate measures deem the Reds’ starters to be inadequate too.

On Opening Day, the Reds rotation consisted of Raisel Iglesias, Brandon Finnegan, Robert Stephenson, Alfredo Simon, and Tim Melville. Due to injury, healed injury, and aggressive promotion, the rotation now consists of Homer Bailey, Anthony DeSclafani, Brandon Finnegan, Dan Straily, and Cody Reed. While the numbers only show a minor improvement over the Opening Day corps, in this one instance, its not about the numbers at all.

Consider the character types of the Reds original rotation:

Of the five, only three factor into the Reds future, and one of those three would’ve factored better in AAA at the season’s start. This rotation, numbers aside, was haphazard and bad for the organization as a whole.

Scanning the above list, every pitcher serves purpose. Unlike the start of the season, none of these guys are eating innings simply because there was a roster spot open and why not?Ã‚Â All of these pitchers can use the rest of 2016 to make the Reds organization better in the long-term, not the present.

When I started to research this post, I assumed I would find that the current Reds’ pitching staff was far better than it was back in May. That there would be this huge, dissonant shift in results proving the Reds are a much better team now than three months ago. In terms of numbers, sure, they probably are marginally better. But we’re at that point in the Reds’ 2016 where numbers only mean fatter contracts and career accolades. We can dream of magical wild card run, but dreams rarely translate to reality.

To get to the heart of it, I don’t think the Reds are any better on the field than they were back in May. Yet, in terms of organizational hopes, dreams, and aspirations, the Reds are aways ahead from where they started the season.Ã‚Â (On the pitching side of things at least.)

This season, we’ve learned a lot about the young arms–Finnegan, Iglesias, DeSclafani, Lorenzen, Reed, and Stephenson–that have been touted as the organization’sÃ‚Â future bedrock for the past year. Now that Homer Bailey is back, we can start to figure out how he fits into this big, messy rebuild as well. Even Dan Straily, picked up from the Padres on the last day of March, has found a potential long-term role with the club (even if it is on the small side).

Trust me, I’m beyond relieved that the Reds bullpen has somewhat turned itself around, and while bottom-feeding isn’t fun, at least it’s productive. We’re starting to see the fruits of this rebuild–a good pitching staff in 2017 and beyond–and I don’t think we could’ve asked for much more than that from 2016.