Perhaps the title is a bit misleading.Ã‚Â  We know Dilson Herrera’s whereabouts thanks to our own Jason Linden.Ã‚Â  What we shall endeavor to do is find a few suitable comparison for Dilson Herrera among current and recent players! 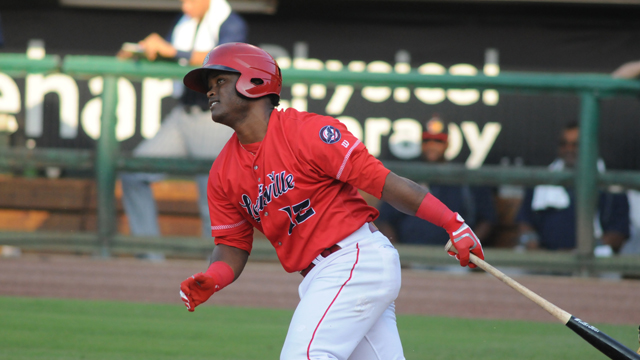 If you read my previous irresponsible piece about Jose Peraza, you’ll be familiar with the method we’ll employ to find comps for Herrera.Ã‚Â  Basically, we take whatever stats we care about for a certain player, calculate the standard deviation of that stat for whatever sample we choose, compare each player against Herrera’s projected values, then sum everything up!Ã‚Â  Lowest sum is the closest comp.Ã‚Â  If you want a little more depth, go down about 1/4 of the way in the linked Peraza article.

So, what do we care about for Herrera?Ã‚Â  His archetype seems to be “power hitting middle infielder.”Ã‚Â  Of course, that has a different connotation than, say, “power hitting corner outfielder,” but I digress…

To find comps for Herrera, I suggest we look at the following 5 measures:

The first two should be evident why they are included.Ã‚Â  Plate discipline largely influences the overall productivity of a player.Ã‚Â  Too many strikeouts or not enough walks has a limiting effect on what you can do at the plate.

Isolated power is a nice measure because it encompasses more than if were to just look at home runs or extra base hits.Ã‚Â  Perhaps Herrera’s main calling card is his power (given that he plays middle infield), so we definitely are interested in ISO.

During his years in the minors at AA and AAA, Herrera has maintained a .354 BABIP.Ã‚Â  Even though many players carry inflated minor league BABIPs, Herrera has maintained this clip over more than 1000 PA, so it’s probably not luck-driven.Ã‚Â  He has a talent-inflated BABIP.Ã‚Â  Without granular batted-ball data (boo, minor leagues) we can’t tell what is causing it.Ã‚Â  The usual culprit is a high line drive rate and a high hard hit percentage.Ã‚Â  Also, avoiding pop ups is key.Ã‚Â  Basically, hit like Joey Votto and you’ll have a high BABIP.

While Herrera isn’t regarded as a top-flight defender, I haven’t read anything that suggests he’ll be a liability.Ã‚Â  So we’ll look for players who are average-ish defenders.

My hypothesis is that if we can find players who are similar to Herrera in these 5 categories, we stand the chance of finding some relevant comparisons.

He’s been pretty productive in AA/AAA over the past 3 seasons, and even his cup of coffee in the majors wasn’t terrible, with nearly league average offense.

So, based on what I see here, as well as some educated guessing, I propose we look at comps that match three different paths for Herrera for the five measures we’ve picked.Ã‚Â  Here are those paths:

I don’t think I need to go into detail about the first 4 measures, but I will talk about the last measure.

Given the positional adjustment inherent in the WAR calculation, an average 2nd baseman is worth 2.5 runs to his team over the course of a season above what a replacement-level 2nd baseman would contribute.Ã‚Â  That might seem low, but it isn’t if you think about it your usual AAAA-type middle infielder.Ã‚Â  There are plenty of good defending middle infielders in the minor leagues.Ã‚Â  They are not hard to find. So, merely being average at defense doesn’t make you that much better than replacement level.

Before we look at comps, I want to discuss our sample.Ã‚Â  I took every player from 2006 to now who has accumulated at least 1000 PA in the major leagues.Ã‚Â  Then, I removed guys who only played outfield, 1st base, catcher, or third base.Ã‚Â  For example, if you’ve played a lot of 3B, but have also done some work at 2B, I left you in.Ã‚Â  But, guys like Miguel Cabrera were out! (Spoiler: Miguel Cabrera was not one of Dilson Herrera’s best comps.)

First up, the conservative range comps! 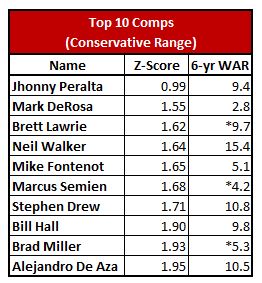 Really, this isn’t anything to scoff at.Ã‚Â  None of these guys are world-breakers, but they were/are all useful, every-day players for their entire span of team control.Ã‚Â  If Dilson Herrera ended up being some amalgam of these players, I’m sure many Reds fans would be overcome with a feeling of…adequacy…perhaps. Nah!Ã‚Â  We want more!

(Note: An asterisk denotes that a player hasn’t reached 6 years of playing time)

Let’s look at comps for the “moderate” range: 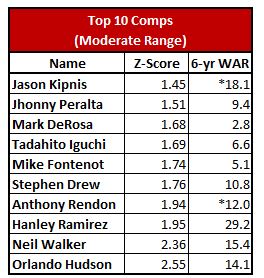 Lots of the same guys, but the addition of Jason Kipnis, Hanley Ramirez, and Orlando Hudson make this a pretty nice set of names.Ã‚Â  Likely, the 15-point bump in ISO from conservative to moderate is what brought Ramirez onto the list, and greater plate discipline brought the others.

So, the “aggressive” range probably represents Herrera’s ceiling, or close to it.Ã‚Â  A middle infielder who plays above average defense and has borderline elite power, with above average plate discipline.Ã‚Â  Let’s see those comps! 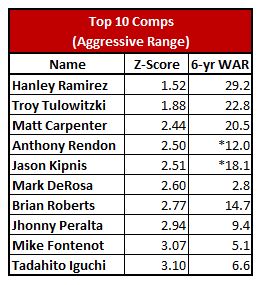 Yep. Those are some heavy hitters at the top.Ã‚Â  While I think it is very unlikely Herrera will match the names at the top, it’s not inconceivable given what he’s shown in the minor leagues.Ã‚Â Ã‚Â  Turns out middle infielders with power are very valuable if they can also flash some leather!