Homer Bailey was terrific in his 2016 debut, returning from Tommy John Surgery. It was Bailey’s first healthy start since 2014. He allowed just two runs over 5.2 innings, and at one point retired 13 consecutive batters. Jose Peraza provided the offense, hitting a two-run home run in the second inning. It was Peraza’s first big league home run.

The Reds bullpen did their job, holding the Padres scoreless for 3.1 innings. The Reds held on for a 3-2 win, taking two of three from the Padres. The Reds have won five consecutive series, and are now 10-5 since the all-star break. The Reds finished 13-11 in July, their first winning month of 2016. 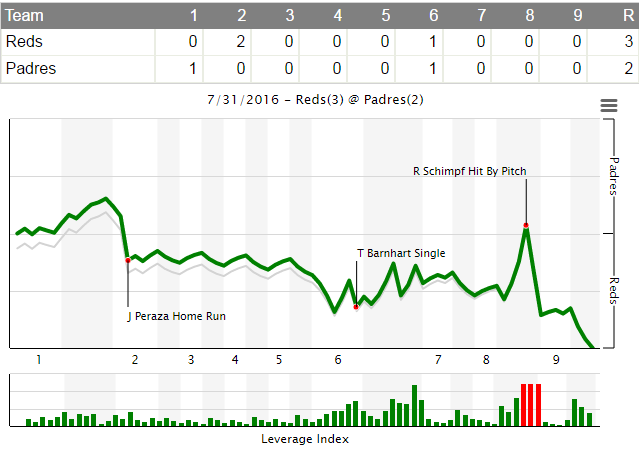 According to FangraphsÃ‚Â WPA statisticÃ‚Â (winning percentage added), the most important play of the game wasÃ‚Â Michael Lorenzen striking out Jabari Blash with the bases loaded for the second out of the inning. Reds lead 3-2.Ã‚Â That play increased the Reds chances of winning by 19.9% (from 46.4% to 64.2%). 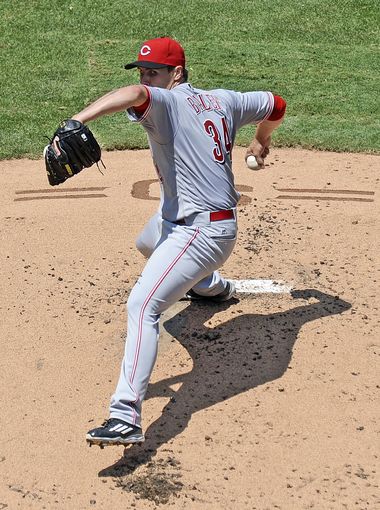 It was awesome to see Bailey back on the hill. He dominated through the first five innings, and at one point retired 13 consecutive batters. He ran into trouble in the 6th inning, walking all three of his batters in the game in the inning. He had a bit of a mental breakdown when he walked he bases loaded, then turned around in frustration knowing he was going to be taken out of the game. Wil Myers alertly stole home without a throw. Still, none of that should take away from a really great first start back for Bailey. His stuff was electric today.

One scout had Homer up to 96 mph on his fastball today.

Jose PerazaÃ‚Â hit his first big league home run! The only reason why Peraza was in the lineup was because Jay Bruce was a late scratch (“mental break”). Hopefully we will see a lot more of Peraza in the everyday lineup. He needs to be playing everyday somewhere.

Joey VottoÃ‚Â extended his hitting streak to 15-games! He had a hit and walk today.

More impressive than a hit streak is that Votto has reached base at least 2x per game during the streak. #Reds #TrollVotto

Blake WoodÃ‚Â got Homer Bailey out of a bases loaded jam in the 6th inning with a strikeout. He also pitched a perfect 7th inning. Wood now has a very nice 3.26 ERA/3.20 FIP on the season. He was really nice free agent signing of Walt Jocketty this offseason.

Billy HamiltonÃ‚Â had an “infield double” in the 9th inning. Yes, he made it to second base on a ground ball without an error.

All nine of the Reds starters (including Bailey!) had a hit.

Tony CingraniÃ‚Â pitched a perfect 9th, recording his 13th save of the season.

It was a good day. Nothing to see here.

Tomorrow at 4:00 PM is the MLB trade deadline. It will be interesting to see what deals the Reds decide to make.Ã‚Â Jay BruceÃ‚Â was given the day off today, and Price called it a “mental day” off. There are some rumors circulating that Dodgers and Giants are interested in Bruce, but nothing substantial yet. As always, stay tuned to to RN for the latest.

All photos,Ã‚Â includingÃ‚Â the feature image, used courtesy of the CincinnatiÃ‚Â Enquirer, and are used by permission.