A few weeks ago, the Reds inducted Pete Rose into the Reds Hall of Fame and retired his #14 jersey.Ã‚Â It was, at last, an MLB-sanctioned chance for Cincinnati to celebrate and honor their troubled favorite son. 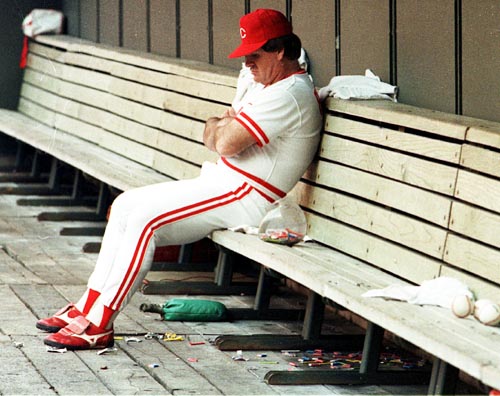 It also provided an opportunity for a beleaguered manager and a sentimental newspaperman to look at baseball through. . . pink-tinted spectacles.

Ã¢â‚¬Å“I want to see effort, not speaking just as a manager, but also as a fan,” Price said. “People tap into that. That approach serves everyone that competes. Not everyone has the intangibles Pete had,Ã‚Â but you sure want to work in that direction.”

Most of the virtues espoused by Rose and adored by his fans might as well be behind glass somewhere. TheyÃ¢â‚¬â„¢re no more relevant than a television with a picture tube. Cheering PeteÃ¢â‚¬â„¢s persona now is not unlike cheering a T-Rex at the museum of natural history.

Daugherty then goes on to list Rose’s (on-field) virtues, and compare them to modern players. He’s careful to say “itÃ¢â‚¬â„¢s not worse now, or better, only different,” but there’s a pretty strong whiff of judgment.

The two big problems with Price and Daugherty’s look backward? First, Pete Rose was far from a product of his times.Ã‚Â Pete Rose isn’t a symbol of an era gone by. He was, and is, singular.Ã‚Â There’s a reason Pete was noticed, singled out, and even mocked (“lookit that Charlie Hustle”) as a rookie.

Call me the next time you see a major leaguer willingly play five positions, without wondering if itÃ¢â‚¬â„¢s in his contract.

Call (or telegraph) me the first time it happened, because I thinkÃ‚Â Pete Rose is the only player of his caliber to play so many positions in a single career.Ã‚Â The norm in baseball,Ã‚Â since before the Titanic sank toÃ‚Â the bottom of the North Atlantic, is that ballplayers want certainty or cash, and usually both. Don’t believe it? Here’s Babe Ruth, who leaped to superstardom and led the Red Sox to the 1918 World Series title as a pitcher/first baseman/outfielder:

I want to be satisfied regarding my salary and I want to play one position. I don’t want to be onÃ‚Â first base one day, in the outfield the next, and on theÃ‚Â rubber a couple days later.” 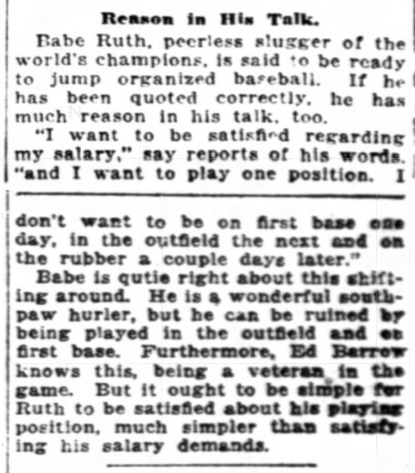 Like Babe Ruth, weÃ‚Â can wish for another Pete Rose,Ã‚Â but let’s notÃ‚Â pretend the game was full ofÃ‚Â them in some golden age gone by.

The bigger problem with this “good old days” nonsense is that Baseball Men (and sportswriters)Ã‚Â have been makingÃ‚Â exactly these same arguments since before catchers wore masks. DonÃ¢â‚¬â„¢t believe it?

We complain now about players who arenÃ¢â‚¬â„¢t fundamentally adept. They lack the proverbial Little Things ability. ThatÃ¢â‚¬â„¢s mostly because if theyÃ¢â‚¬â„¢re really good, the scouts want to see their individual skills. A hot prospectÃ¢â‚¬â„¢s not going to bunt when he can swing for a three-run homer. A kid pitcherÃ¢â‚¬â„¢s not going to learn his craft when he can simply fly past it at 95 mph.

Most players don’t learn the fundamentals. Most of them don’t practice. They don’t even train. The sole object, encouraged by the lively ball and short fences, is to make home runs.

The thing is that the boys today have never learned to hit. The idea nowadays is to close your eyes and swing with all your might — never trying to aim the ball toward a hole in the defense and in fact never noticing where the fielders are playing. The greatest disgrace in modern baseball is that few batters even know how to lay down a good bunt. Some of them don’t even try it. 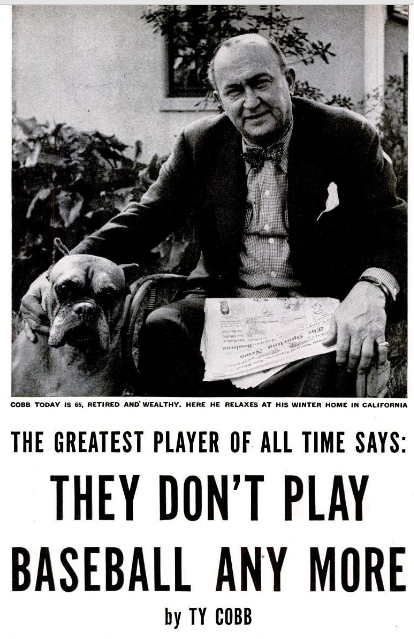 The camaraderie we witnessed this weekend between the Reds Hall of Famers and within the Big Red Machinists in attendance has ebbed as well. In RoseÃ¢â‚¬â„¢s day, players didnÃ¢â‚¬â„¢t automatically shower, dress and leave after games. They stayed, sometimes long afterwards, maybe had a few beers, and talked baseball.

You donÃ¢â‚¬â„¢t see that now. Everyone has somewhere to be. Health-conscious players would rather seal themselves hermetically in their hotel rooms or rented abodes than subject their bodies to alcohol.Ã‚Â Ã‚Â  Plus, liability being what it is, ballclubs arenÃ¢â‚¬â„¢t providing alcohol the way they once did.

What did Cobb have to say about camaraderieÃ‚Â in the era of Musial, Mantle, DiMaggio, and Williams?

We took our time in the clubhouse. We cooled out slowly and talked about the ball game all the while. … The post-mortem began in the clubhouse. It continued while we all went back to the hotel by streetcar and ate our supper together. . . .

Today [1952!] all of this has changed. You can go around today to a hotel where a visiting ball club is staying and perhaps never even see a ballplayer unless you want to sit waiting in the lobbyÃ‚Â from 5 o’clock until past midnight.

Nobody spends much time in the clubhouse; everybody is in a hurry to get away. As a team they never see each other until they congregate at the ball park next morning to start dressing for the game.

ItÃ¢â‚¬â„¢s not worse now, or better, only different. Rose played most of his career with one-year contracts that paid pennies compared to today. If pride didnÃ¢â‚¬â„¢t drive you, making a living did. Players now donÃ¢â‚¬â„¢t have that worry. After that first huge deal, itÃ¢â‚¬â„¢s all pride, basically.

Some of today’s rookies start out with as much as $100,000 in the bank, paid as a bonus just for signing a contract. Even the unluckiest of them get real good salaries, paid mostly for doing nothing except eating, maturing, and gaining strength until they can powder the ball. . . . Where is the incentive?

CobbÃ‚Â goes on like that. On and on. Forever. Check out the articleÃ‚Â Ã‚Â if you’re interested inÃ‚Â complaintsÃ‚Â about insufficient rookieÃ‚Â hazing, excessiveÃ‚Â home runs, and several hundred words about different types of spitballs.

But you get the idea. I could reach back and find a similar article from aÃ‚Â guy older thanÃ‚Â Cobb; one where a 1950s guy complains about Rose’s generation; or where one of Rose’s teammates complains about the game going soft, etc. etc. Now it’s bat flips.Ã‚Â Someday soon, someÃ‚Â modern day dunce will be telling our kids how hard-nosed and preciseÃ‚Â the game was in 2016.

But Bryan Price and Paul Daugherty have been around long enough to realize this is nonsense. PeteÃ‚Â Rose isn’t a symbol of an era gone by. He was one of a kind.