On April 29th, I wrote a column titled Neutralizing Joey Votto.Ã‚Â  To date, I think it is the best baseball analysis I’ve ever done.Ã‚Â  If you haven’t read it and appreciate trips down memory lane, you should go check it out.Ã‚Â  There are lots of charts and graphs, if you like that stuff, too.Ã‚Â Ã‚Â  I also wrote something later called Joey Votto’s Strikeouts.Ã‚Â  Read that, too.Ã‚Â  You’ll be happy you did.Ã‚Â  If nothing else, I’ll have succeeded in wasting 20 or so of your minutes on a Friday morning.

However, Votto’s production really didn’t pick up in earnest until the day after Clayton Kershaw did Clayton Kershawy things to the Reds on May 23rd.Ã‚Â  Below is a chart showing production Pre-Kershaw and Post-Kershaw:

To say the difference is stark would be apt.Ã‚Â  Votto has improved in all meaningful ways.Ã‚Â  I’m guessing you already knew Votto was hitting well the last 2 months since you are smart.Ã‚Â  I know you are smart because you are reading Redleg Nation.Ã‚Â  It’s logic, or something.

So, why has Votto improved?Ã‚Â  Well, if you read the linked articles above, you know why he wasn’t doing well early in the year.Ã‚Â  A combination of the following; an inability to hit inside pitches with authority, umpires calling high-and-away strikes more than ever, and some poor BABIP luck; led to Votto’s poor start.

So,Ã‚Â  what can we find to support Votto’s increased production?Ã‚Â  That is what we shall endeavor to find.

First, I think it is important to look at how pitchers are attacking Votto.Ã‚Â  The below set of heat maps show Votto’s pitches seen, both Pre- and Post-Kershaw.Ã‚Â  Recall that this is from the catcher’s point-of-view, so an outside pitch to Votto is on the left of the heat map, while inside pitches are on the right. 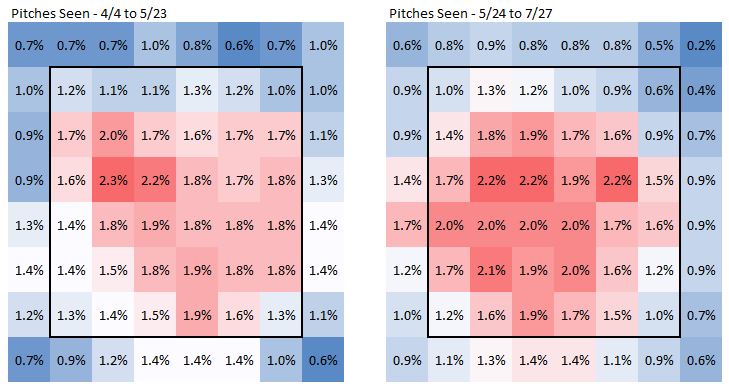 Generally speaking, we can see a pronounced shift away from the “bust him inside” strategy.Ã‚Â  Votto has seen a lot more pitches away, down, and mid-mid.Ã‚Â Ã‚Â  Below is another way to visualize it, where I show the differential between these two heat maps: 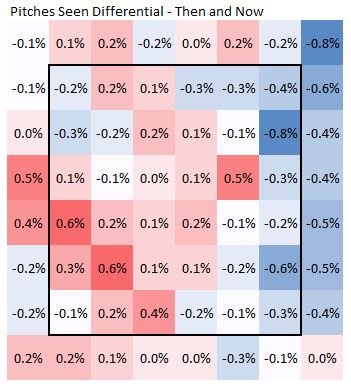 Red means “more pitches” and blue means “less pitches.”Ã‚Â  I think this view is much easier to digest.Ã‚Â  So, basically, Votto has seen a lot more hittable pitches.Ã‚Â  That is good for Votto.

Why pitchers have seemingly abandoned a strategy that was working is a mystery.Ã‚Â  We know not all pitchers are comfortable throwing inside, so maybe Votto faced a disproportionate amount on inside throwers early in the year?Ã‚Â  Your guess is as good as mine as to the shift in pitch placement.

Next, I want to look at how Votto’s zone is being called by umps.Ã‚Â  We know Votto’s approach lends itself to dogmatically taking pitches in certain parts of the zone.Ã‚Â  One of those zones is up-and-away.Ã‚Â  If you want more on that, go read the article about strikeouts.

So, here are the two heap maps showing Votto’s called strike percentages over our two periods in question: 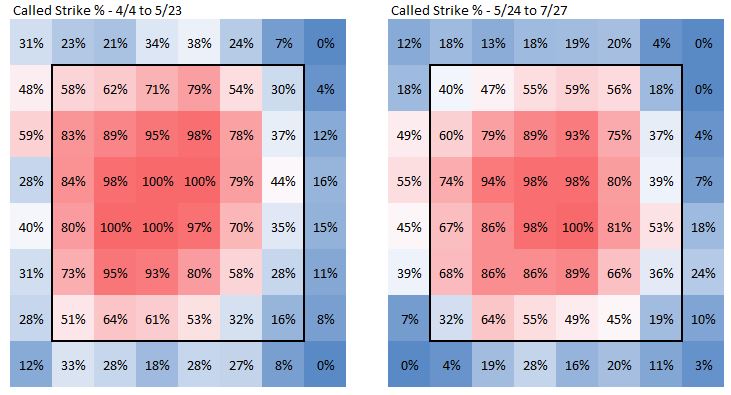 Seems like Votto’s strike zone is much more symmetric now than it was then.Ã‚Â  Once again, we’ll look at the differential view: 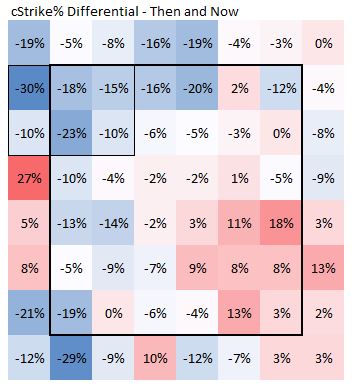 I’ve put a box around the up-and-away section that I discussed in the Strikeout article.Ã‚Â  In the earlier part of the year, Votto was getting a ton of strike calls he didn’t expect.Ã‚Â  This put him behind in counts more often than he should have been, and even Joey Votto doesn’t hit as well behind as he does ahead. More recently, he’s seen called strikes in that area decline significantly.Ã‚Â  With a more predictable zone, Votto can do what Votto does.

The last thing I want to show is Votto’s contact rate differential between the two periods.Ã‚Â  Rather than looking at all 3 heat maps, we’ll just look at the differential heat map: 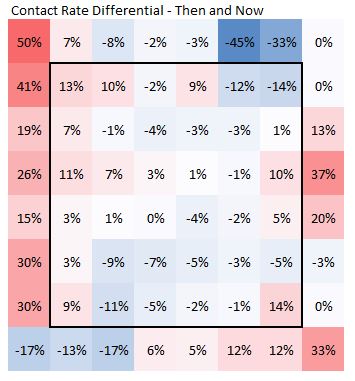 Red means “more contact” and blue means “less contact.” The light coloration in the middle shows what you’d expect; Votto is making similar contact in the middle of the plate.Ã‚Â  That’s usually something that doesn’t change much until your bat speed begins to decline.

This chart is very, very interesting to me for one specific reason.Ã‚Â  Votto has covered both inside and outside pitches better over the last 2 months.Ã‚Â  I know you’ve all heard announcers say something like “You can’t cover inside and outside at the same time!”Ã‚Â  Well, Votto has done exactly that.

In closing, I’ve briefly shown that Votto has received a more symmetric, predictable strike zone, he’s somehow figured out how to cover the entire plate, and pitchers have inexplicably started throwing him better pitches to hit.Ã‚Â  Add all that together with a BABIP that is approaching Votto’s career levels, and we have normal Joey Votto back.Ã‚Â  I never doubted him for a minute…gulp.

I made this chart and it didn’t really fit in above, but I wanted to include it anyways!

What we have here shows Runs Above Average (RAA) per 100 pitches seen (RAA/100).Ã‚Â  Essentially, this shows where you (as a pitcher) would want to throw the ball in order to minimize the impact a hitter has on the game. 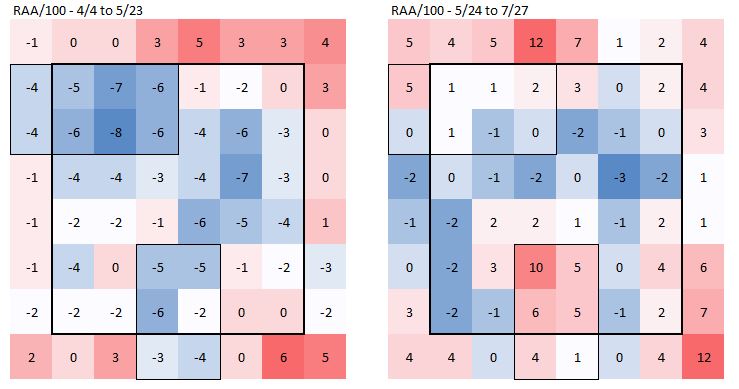 On the left heat map, we see the infamous up-and-away zone. Votto was significantly below average in run production in this zone, largely due to taking called strikes (recall that taking strikes has a negative effect on run expectancy). Also, pitches over the middle of the plate, but down, were a problem for Votto.

If you examine those two zones Post-Kershaw, we see a stark difference.Ã‚Â  These zones make up a large portion of Votto’s increased run production.Ã‚Â  He’s destroying low strikes over the zone, and umps have stopped screwing him on up-and-away strikes!

Important to note… blue doesn’t necessarily mean “bad,” just “below average.”Ã‚Â Ã‚Â  Notice how a lot of Votto’s down-the-middle zone is blue.Ã‚Â  That’s because everyone does well on pitches down the middle.Ã‚Â  What has made Votto an elite hitter is what he does (or doesn’t do) on the edges of the zone.Ã‚Â  Other hitters get themselves out on pitches outside the zone.Ã‚Â  Votto gets to chat with the opposing first baseman.

So, really, Votto has been the best hitter in baseball in July by a wide margin.Ã‚Â  In fact, Votto’s July margin is larger than any margin between a 1st and 2nd place hitter in any other month of the year.

ALSO…Votto’s July wRC+ of 219 is the highest monthly mark of any hitter in baseball this season.Ã‚Â  There are still a couple games left, so this can change drastically, but Votto just (maybe) put up the best offensive month in baseball this year.

Votto is something else.

Data used to create the heat maps is courtesy of FanGraphs.