Narrative #1: The Reds have the worst bullpen in history.

For the first three months of the season, this was impossible to contest, whether you used old metrics or new fangled ones. Just a few weeks into the season, Rob Carpenter posted here about the historical aspect of the bullpenÃ¢â‚¬â„¢s performance. About a month later, Matt WilkesÃ‚Â updated the tragedyÃ‚Â during May’s ERA ground zero. Remember May? Refresh your nightmares: Caleb Cotham, Steve Delabar, A.J. Morris, Drew Hayes, J.C. Ramirez, Dayan Daiz Ã¢â‚¬Â¦

This situation was due in part to the front office making no effort to spend money to improve the bullpen in the offseason. That was the right approach because when you’re rebuilding, there’s no reason to make short-term investments on relievers. And relievers are almost always short-term payoffs at best. So good for the front office. The second factor in the worst-ever bullpen was an epidemic of injuries.

Not that those factors made watching any less painful. The Reds bullpen has allowed more home runs (69) than any other team. Second place is Texas (53). ItÃ¢â‚¬â„¢s not just home runs that have hurt the Reds relief corps, it is also league worst in walks and third from the bottom in strikeouts. Not surprisingly, they have the highest ERA and highest SIERA.

ItÃ¢â‚¬â„¢s hard to argue with this, although the degree might be in question. If you simply look at ERA by month, the bullpen was getting better in June, but still was considerably worse than league average (3.91). July, so far, has been great. We know this to be the case beyond doubt because we have a chart. 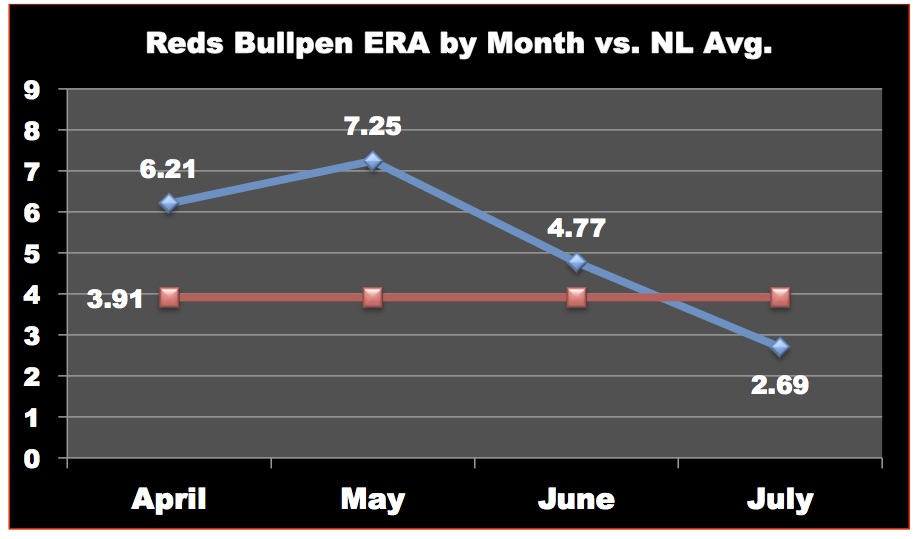 Side note: J.J. Hoover had two disastrous appearances at the end of June. If you subtract those, the bullpenÃ¢â‚¬â„¢s ERA was 4.01 instead of 4.77. That shows what one or two bad outings can do to the ERA stat because you’re dealing with relatively small numbers and run scoring is clunky. On the other hand, you canÃ¢â‚¬â„¢t subtract Hoover. His presence in the bullpen is part of the story.

But our chart just measures ERA.Ã‚Â If you tighten up the metric, the story is partly the same (improvement) and partly different (not better than league average).

The BABIP column is interesting. League average for years has been around .295 consistent with the notion that pitchers have little control over the ball once itÃ¢â‚¬â„¢s put in play. Variation can be due to good defense or luck. Home runs are excluded from BABIP since they arenÃ¢â‚¬â„¢t in play. Note the Reds BABIP was actually better than historical average in April, then skyrocketed in May, causing the ERA to go up. In July, the Reds pitchers have benefitted from good fortune on balls falling in for hits so far. So while the FIP, xFIP and SIERA all show welcome improvement, they aren’t as shiny as that July ERA number.Ã‚Â Strikeouts and walks are moving back to normal but are not quite there yet.

What caused this all of a sudden (welcome back Thom) improvement? We have theories!

Similarly, Michael Lorenzen began pitching out of the bullpen on June 24. His ERA has been 3.31, FIP 5.34 and SIERA 3.23. The high FIP but lower SIERA is an indication that Lorenzen has been lucky when it comes to BABIP but unlucky on home runs. Note that Lorenzen’s SIERA is a little bit better than Iglesias’.

The addition of Iglesias and Lorenzen to the bullpen Ã¢â‚¬â€œ replacing J.J. Hoover and J.C. Ramirez Ã¢â‚¬â€œ made a huge difference. Those two pitchers have accounted for a third (34%)Ã‚Â of all bullpen innings in the past thirty days.

Side note:Ã‚Â Bryan Price has been using Iglesias and Lorenzen for multiple innings per appearance. If you take their usage rates and extrapolate them out for 162 games, it adds up to 117 IP for Iglesias and 98 IP for Lorenzen. In the case of Iglesias, the Reds have to be concerned about his two shoulder-related trips to the DL. Using him like this is a compromise between a starterÃ¢â‚¬â„¢s full load of say 180-200 IP and traditional reliever use of 65-70 IP.

The Reds fired their pitching coach Mark Riggins on July 4. They promoted bullpen coach Mack Jenkins to head pitching coach and brought up Ted Power from AAA-Louisville to handle the bullpen. Did the coaching change cause the improvement in the bullpen?

Skepticism is called for in a situation like this when the sample size since July 4 is so small. Further complicating an easy conclusion is that the guy who had been the bullpen coach when it was worst-ever terrible is still the overall pitching coach, maybe with even more influence. Hard to tease out all the coaching influences without being on the inside.

But hereÃ¢â‚¬â„¢s whatÃ¢â‚¬â„¢s tantalizing about the game logs. From June 27 to July 4, the Reds bullpen was scored on in every game, 22 runs in 8 games (two of those were the Hoover blow-ups). Starting on July 5, with the new coaching arrangement, the Reds have given up 14 runs in 17 games, including seven 0-run games.

When you go through each box score of the past two months (and I did it so you don’t have to) and chart the bullpen’s innings pitched and runs surrendered, and you try to pinpoint the exact time when the pen switched from being bad to good (which is stupid, it doesn’t work that way, but if you did) it’s hard to ignore July 5 as that date.

In addition to the above mentioned stupidity, great caution is necessary for in interpreting the data this way. The coaching change coincided with the arrival of the cavalry. Plus, in this section weÃ¢â‚¬â„¢re back to relying so far on earned runs surrendered as a measure for pitching and thatÃ¢â‚¬â„¢s not terribly reliable, especially with relievers.

Can we eliminate the cavalry factor somehow to better isolate the coaching contribution?

Four pitchers Ã¢â‚¬â€œ Tony Cingrani, Ross Ohlendorf, Blake Wood and Josh Smith Ã¢â‚¬â€œ pitched a significant number of games with the old coaching staff and have stayed on with the new arrangement. If the coaching has had an impact beyond the arrival of Iglesias and Lorenzen, it would show up on those four pitchers.

These numbers are SIERA not ERA, so that’s better. But they are based on small samples, especially the right column.

Two of the pitchers have been much better since the new coaches have appeared, one has stayed about the same and the fourth has been worse. Changes in SIERA are more important than those of equal size in ERA because SIERA reduces the spread of value between the worst and best. Makes sense since the difference between pitchers isn’t as great as what reliever ERA indicates. So gains by a run or so are noteworthy. Or at least they would be over a larger sample.

The results of our investigation are sort of a mixed bag, maybe small positive evidence for ItÃ¢â‚¬â„¢s the Coaches.

On the other hand, pitchers fluctuate during the year for reasons not related to coaching. You really should take this theory with a grain of salt, or at least the evidence marshaled to support it here. Especially in light of Ã¢â‚¬Â¦

One other idea worth mentioning is the possibility the improved bullpen has coincided with an easier part of the Reds schedule. Nothing fancy here, just pointing out those games since July 5 have been against the Cubs, Miami, Milwaukee, Atlanta, Arizona and San Francisco. Over the past 30 days, those offenses ranked #13, #14, #23, #24, #26 and #25 in runs scored.

So maybe thereÃ¢â‚¬â„¢s an element of weaker offenses at play. Those eight games that led up to Mark Riggins getting fired, where the bullpen gave up runs in every one, they were against the Cubs, Nationals and Cubs again.

The Reds bullpen has snapped out of its April/May death spiral. Over the last 30 days or so they have been functioning approximately as a normal, league-average pen, although not quite. Tap the brakes on OMG, The Bullpen!Ã‚Â

Most of the improvement can be explained by the performances of Raisel Iglesias and Michael Lorenzen replacing those of J.J. Hoover and J.C. Ramirez. ThatÃ¢â‚¬â„¢s good news because those guys arenÃ¢â‚¬â„¢t going anywhere, health permitting.