Jay Bruce is not going out quietly.

The Reds slugger is amidst swirling trade rumors with the deadline next Monday, but he didn’t let that slow him down. He hit two more home runs tonight. AT&T Park in San Francisco is known a pitchers park, but it was anything but tonight. The Reds and Giants combined to hit four home runs, and the Reds outlasted the Giants in a slugfest 7-5. The Reds are now 7-3 in the second half. 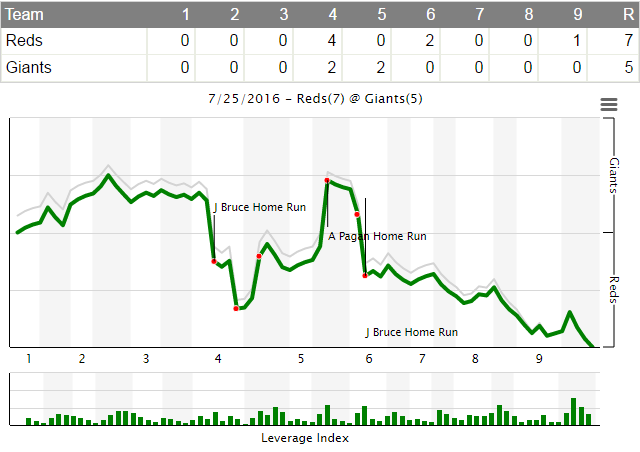 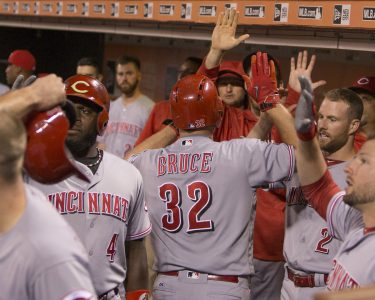 Bruce continues to crush baseballs. He hit his 22nd and 23rd home runs of the season tonight. Bruce is getting hot at the right time before the trade deadline. Over his last 3 games, he is 6 for 12 with 4 HR and 11 RBI.

Eugenio SuarezÃ‚Â hit his 17th home run of the season. He also had a leadoff double and scored in the 9th inning. Suarez has certainly had an up and down season, but 17 home runs for a 25 year old infielder is a good thing.

Billy HamiltonÃ‚Â only went 1 for 5, but that 1 hit was a suicide squeeze in the 9th inning to give the Reds a big insurance run.

Joey VottoÃ‚Â now has a 10-game hitting streak right out of the all-star break. He had a hit and walk tonight, and his OPS is now up to .901. It is the first time this season that Votto’s OPS has reached .900+.

Brandon PhillipsÃ‚Â extended his hitting streak to 13 games. He went 1 for 4.

Adam DuvallÃ‚Â had two walks. He entered today with a 5.3 BB%, so two walks for him is nice to see.

Jumbo DiazÃ‚Â pitched a perfect 6th inning with a strikeout.Ã‚Â Tony CingraniÃ‚Â gave up a leadoff single, but pitched a scoreless 9th for his 11th save of the season.

Anthony DeSclafaniÃ‚Â didn’t have his best stuff tonight. He looked good early, allowing just 1 run through the first three innings. He however gave up two bombs in the 4th and 5th. His final line: 5.0 IP, 6 H, 5 ER, 2 BB, 6 K. 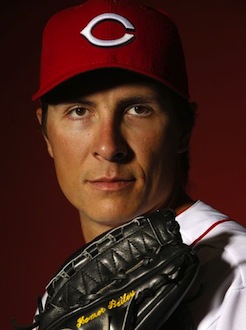 It sounds likeÃ‚Â Homer BaileyÃ‚Â will be back in the Reds rotation this weekend. Ã‚Â Bailey made his sixth rehab start for the Louisville Bats today, and finished with a line of: 4.1 IP, 5 H, 2 ER, 4 BB, 4 K, 98 pitches, 57 strikes. Jason Linden was in Louisville tonight, and shared his observations earlier tonight:

I was at the Bats game tonight and spoke with Homer Bailey after the game. This will be a brief write-up, but I want to get the relevant stuff out as quickly as possible.

Homer didnÃ¢â‚¬â„¢t have a great game today, but it was good enough. He threw 98 pitches. His velocity sat in the 93-95 mph range with several pitches at 96 and one at 97. His control was a little dodgy as he allowed 4 walks and only threw 4 1/3 innings. The defense, however, was less than stellar and that also contributed to his elevated pitch count.

I asked if he felt he had anything left to do in Louisville and he said, Ã¢â‚¬Å“Leave.Ã¢â‚¬Â He also said he will be catching a plane to San Francisco tomorrow to join the Reds.