A common critique of the Reds front office over the past few years has been that those in charge targetÃ‚Â speed and defense-minded players, advocating for aÃ‚Â small ball approach dependent on superb pitching and eeking out a couple of runs. Or, as Bryan Price put it the other day, “If you can pitch, you can win in this league. And if you don’t pitch, you don’t win.”

While acknowledging that the Reds are rebuilding, the philosophy has maroonedÃ‚Â the team onÃ‚Â an abysmal 36-58 island. The speed isÃ‚Â there, the pitching is green but learning, and Joey Votto is still Joey Votto despiteÃ‚Â losing his wallet, phone, and car keys for the first couple months of the season. Yet, to paraphrase the legendary Cap’n Jack Sparrow, many Reds fans have been left wondering: “But where have the gloves gone?”

Before I can investigate any sort of defensive shortcomings, however; a few caveats must be made.

1) Most defensive stats recommend looking at a three year sample size; we’re looking at half a season. Take all conclusions with a grain of salt.

2) Defensive stats are notoriously hard to calculate and any explanation of how these were arrived at is largely futile. You can’t figure this stuff out with a pen and paper, but that doesn’t mean they aren’t less informative and relevant.

4) I will be using DRS, UZR/150, and Def for all analysis. DRS and UZR/150 attempt to measure and quantify defense through similar but tweaked methods, whereas Def is a positional modification of UZR. For convenience, here are my simplifications of Fangraphs’Ã‚Â definitions:

Defensive Runs Saved (DRS) — Measures how many runs a player savesÃ‚Â over the course of a season. The number falls on a scale of -20 to 20, with 0 being the average fielder at that position and +15 being a Gold Glove fielder. The statistic encapsulates position specific fielding events, such as double plays for 2B/SS or bunts for 3B/1B, as well as a range rating.

Ultimate Zone Rating/150 (UZR/150) –Ã‚Â Measures how many runs a player saves over the course of a season, but is scaled to an average number of plays. UZR/150 allows us to more accurately account for differences in innings played, making comparisons across players more meaningful than DRS comparisons. The statistic also encapsulates position specific fielding events and range ratings, but tries to quantify how much a batted ball would be worth to the hitting team and how often the fielding player would make the play. UZR/150 does not apply to catchers.

Okay, so where do the 2016 Cincinnati Reds stack up against their recent iterations? The short answer: Not that well. 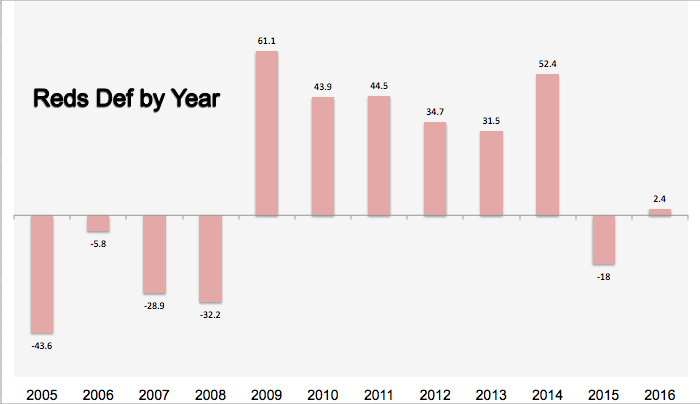 What’s most surprising in the above graph is not the Reds current defensive downturn, but that the slide actually began last season. Def is the best stat to use here because we’re comparing a full teams’ statistics. As such,Ã‚Â the Reds rate just above average in the 2016, good for 13th in the Majors, as opposed to well below average and the 9th worst fielding team in 2015.

While neither of those numbers are unforgivable, they come after a six year stretch–2009 to 2014–where the Reds never ranked below 7th in Def and were in the top three five times. Prior to 2009, the Reds were absolutely miserable on defense, so we’ll ignore those years for the rest of this post because it’s simply too painful.

So what happened? How did the mighty fall? Injury, age, and a bit of Jay Bruce it seems. 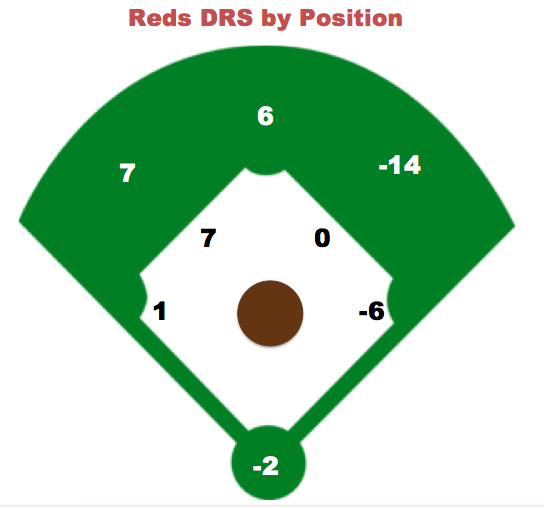 By positional DRS, the Reds are league average or better everywhereÃ‚Â but catcher, first base, and right field. Of those three, Tucker Barnhart and Co. make up the difference to post a 9.1 Def, largely because catcher is a more valuable position than most others. Joey Votto’s -9.3 Def is right in line with his career average, so the club’s defensive woes can’t be blamed on the lead-footed first baseman even though compared to other first baseman, he is having a down season (-6 DRS compared to 2015’s 7 DRS).

Second base, and by that I mean Brandon Phillips,Ã‚Â has also shown a steady decline over the years, decreasing from 2011’s 15.3 Def to last year’s 6.2 to this year’s 3.5. Ã‚Â BP is still valuable on defense, but his days of Gold Glove contention are most definitely behind him.

The true surprise here is thatÃ‚Â right field is far and away the worst defensive position on this current Reds team. The position’s -20.5 UZR/150 is more than double the number from 2015, which was an already quite bad -10.1. The Reds seem to be following the Little League mindset of putting the worst fielder in right but have forgotten that Major Leaguers can actually get the ball out of the infield.

Before looking further into why right field has been so bad this season, it’s worth noting that the Reds have returned to a league-average defensive team largely because of Zack Cozart’s return and Adam Duvall’s emergence. 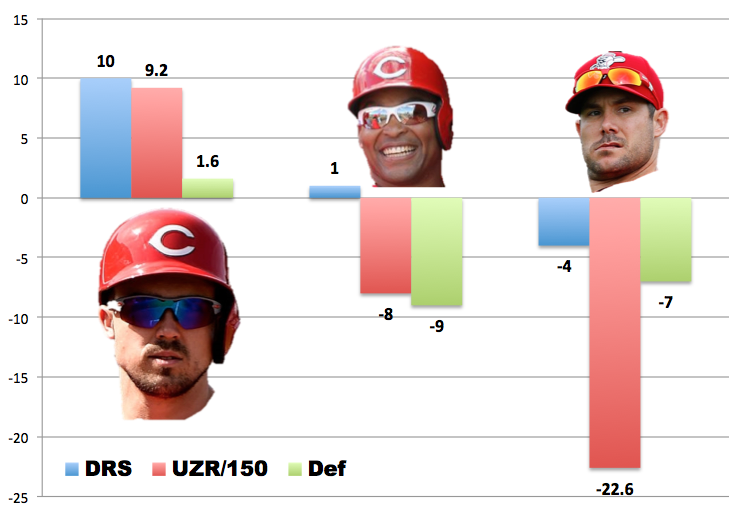 Adam Duvall has been an above average fielder in left all season with a 9.2 UZR/150, far eclipsing the bumbling duo of Marlon Byrd (-8) and Skip Schumaker (-22.6). Duvall is actually the first positively rated every day left fielder the Reds have had since Chris Heisey in 2013. (Heisey only 423 innings in left that year as the Reds staffed the position by Ã‚Â a committee which included defensive nightmares Ryan Ludwick and Xavier Paul.)

But what happened to right field?Ã‚Â To be entirely honest, I have no idea. 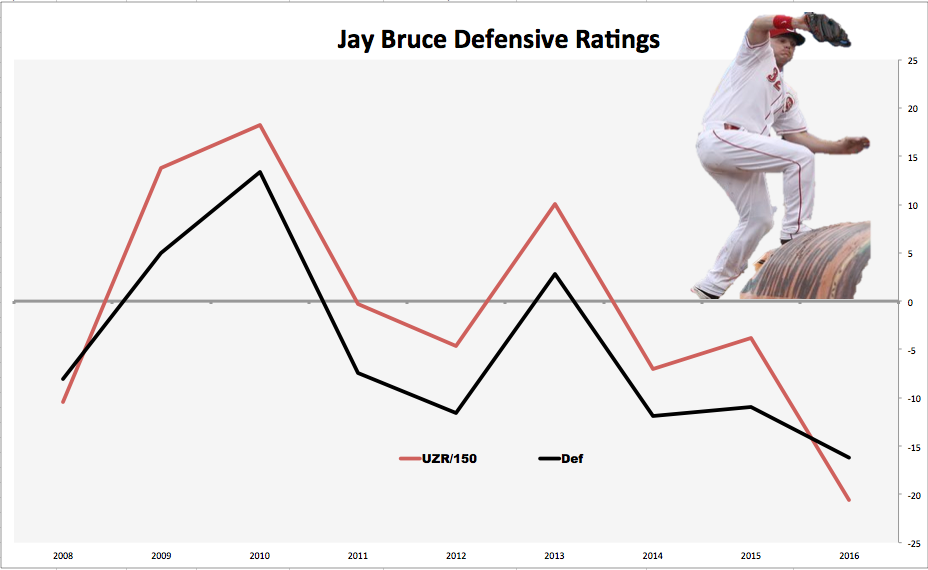 Jay has never been that great of a defender, posting negative UZR/150 numbers in six of his nine seasons, and he’s usually been quite a ways below average. Some years his arm will make up for his range, and others vice versa. Defensive statistics are about as confused by Jay Bruce as I am by defensive statistics.

That both Jay’s arm and range have gone down the drain this year is probably less a reflection on his defensive prowess, which is admittedly nonexistent, and more a compensation for his suddenly resurgent bat. Jay Bruce is a living “You can only pick two” triangle, except he only gets oneÃ‚Â . 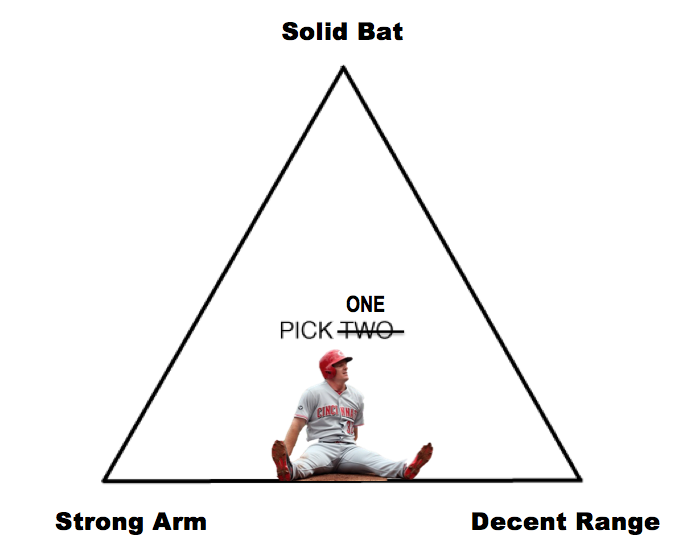 Can all of the Reds’ defensive woes be blamed on Jay? Absolutely not, but he is far and away the worst defender on this team. I wouldn’t except the defense to get better with him on his way out the door either.

The Reds stand to lose their best defender (Cozart) soon, and their second worst (Votto) will be here for the long run. Both Eugenio Suarez and Tucker Barnhart are average defenders at best, against popular belief in opposite ways, and BP will only keep getting worse. On the whole, the Reds aren’t a bad defensive team, just a mediocre one. But after years of league excellence, mediocre seems pretty dang bad to the rest of us.

Unfortunately, it seems like the gloves are gone for good, and like Jack Sparrow, Reds fans are marooned on a desert island with nothing fun to pass the time. But you know, Elizabeth burned the rum to save the two of them in that movie, maybe the Reds can find a way to do the same.