GOOD MORNING AREN’T YOU SO, SO GLAD YOU STAYED UP FOR THE END OF THAT HIGHLY UPLIFTING GAME?!!!?!?!? YEAH!

Here’s the best news: Ã‚Â There’s more coming! Ã‚Â Final game of three between Reds (35-59) and Braves (33-61.) As my yoga teacher said to me yesterday as I stood on one foot with my head parallel to the floor: “No one’s coming to help you.”

ONE SMALL STEP TO CONCOURSE B

Did you know this one of only two or so photographs of our Ohioan Neil Armstrong on the lunar surface? Ã‚Â All those famous images of a saluting astronaut and general shuffling around are of Buzz Aldrin. Like all good dads, Neil’s not in the picture because he was holding the camera.

(If you haven’t had a chance to see the Cincinnati Museum of Natural History’s replica of Neil Armstrong’s Apollo 11 EVA suit, starting today, you can catch a glimpse at CVG while Union Terminal is under renovation.)

I raise the topic of the Moon landing in a Reds baseball blog because people once thought swallowing food in space was impossible, much less landing and walking on the Moon. Behold, bullpen: Ã‚Â You can hold a lead if you but believe. 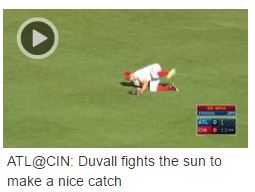 A significant number of images in the media library range between “Well this is fairly non-baseball related” to “WTF.”

Hey, remember the fact that certain other Reds also aren’t yet in Cooperstown? The hometown boys are wearing hometown boy Griffey-style throwback jerseys to honor his induction into the national HOF. 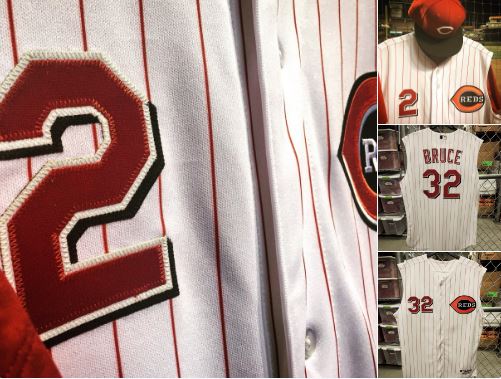 Oh man that cap. I forgot how MLB teams made this wild Backstreet Boys-era rush to sell merch by heaping black into all available uniforms, whether it was actually part of the team’s colors or not.

Good to see some love for Junior, but eh… not enough stirrups going on here. But anything’s better than they Polyester Parade of the 80’s.

If you tweet with The Kids These Days, give a follow to @RedsGroundsCrew. They’re funny and cheerfulÃ‚Â and probably also very handsome and I’m never worried that they will place the rain tarp over areas not meant to be covered by the rain tarp. The product playing on the field ain’t much right now, but the team who at least tends to their office spaceÃ‚Â are amongst the best in the biz.

Uh oh…@Reds this might make mowing difficult. Can they help pull the tarp if it rains? #Reds #PokemonGO https://t.co/x4hgiNvZzn

Deep in your hearts, Cubs, way deep down… you know this is who you really are.