Last week, we dove in to exit velocity for pitchers to see if we could reach any conclusions about what it means. While there was a lot of interesting data, the results didn’t yield many definitive conclusions. There simply wasn’t much to connect between a pitcher’s overall performance and how hard batters are hitting the ball against him.

In the comments, fellow Redleg Nation columnistÃ‚Â Doug Gray made anÃ‚Â interesting point about how batting average is directly related to exit velocity; that is, averages go up the harder the ball is hit, which makes plenty of sense. He also pointed out that itÃ‚Â may be more prudent to look at exit velocityÃ‚Â when broken down by pitch. So, that’s exactly what the column is about this week! Thanks, Doug!

Below, you can see the results. Instead of using ERA and FIP, we’ll look at batting average and slugging percentage allowed by each hurler per pitch, as those are more directly related. In addition, whiff rate is also included because it gives us another measure to gauge how effective a pitcher has been with specific offerings (it obviously doesn’t actually have anything to do with exit velocity). While there are still some obvious issues with sample size, the results are a bit more telling when broken down this way as opposed to grouping all pitches together. Although it certainly doesn’t clear up all of our questions about exit velocity, we can certainly see some connections.Ã‚Â Let’s dive in!

(Note: To avoid sorting through the numbers for all 27 (!) pitchers the Reds have used this year, the data is limited to those who are still on the 40-man roster.Ã‚Â Additionally, the results for each sectionÃ‚Â are limited to pitchers who have 10 or more batted balls against them on that specific pitch.) 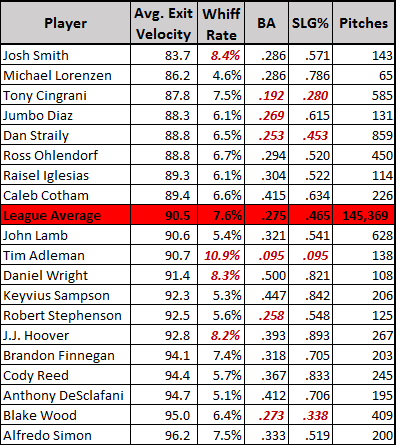 With every pitcher featuring a four-seamer and the sample sizes varying widely, it’s tough to read too much into the data here, as the numbers are scattered. But there are some interesting things to note:

Minus Dan Straily’s strange results (something something sample size), the numbers on the two-seamer fall more in line with what one would expect.

Compared to the other pitches, we have some nice sample sizes for the two hurlers that throw a sinker. The numbers really show why it is such an effective No. 1 pitch for bothÃ‚Â Raisel Iglesias and Brandon Finnegan.

Low or high exit velocity, the cut fastball has been a particularly bad pitch for both Reds that use it. 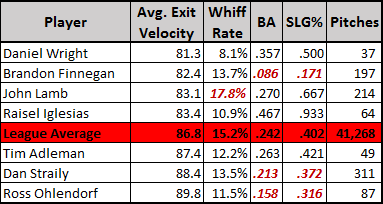 While we got more intuitive results for the two-seamer, sinker, and cutter, the changeup stats are all over the place. Keep in mind, however, that only three of the players on this table have thrown the pitch in excess of 100 times.

The league performs worse against the curveball than any other pitch, and we can see here that there are several Reds with a good hook. 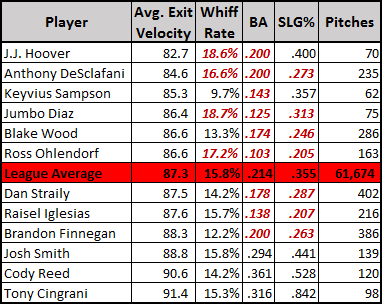 On the slider, we’re also seeing that hitting the ball with less authority results in fewer hits and lower power numbers.