Statcast has unleashed a bevy of new, fascinating data for baseball fans to take in that will only get more interesting and helpful in evaluating players as time goes on.Ã‚Â Last week, IÃ‚Â broke down a relatively new concept to the world of baseball in spin rates, what they mean for each pitch, and which Reds pitchers have good (or bad) ones.

This week, I’m going to look at the Reds’ pitching leaders in another stat brought to us by Statcast: exit velocity.

Generally, batted ball speed is thought of in regards to hitters, especially for sluggers like Giancarlo Stanton, who has hit a ball in excess of 120 mph (!) on many occasions — including a few en route to his victory in the Home Run Derby on Monday.

As I dug into the data, it was clear that it was going to be difficult to determine much from exit velocity for pitchers. The data shows that a low average exit velocity doesn’t necessarily equate to success, and a high one doesn’t always indicate a poor performance.

At the top of the leaderboard — which in this case is limited to the 145 pitchers with a minimum of 150 batted balls against them — you’ll find a bunch of the top hurlers in the game this season, including Kenta Maeda (1st), Johnny Cueto (5th), Felix Hernandez (8th), Clayton Kershaw (9th), Jake Arrieta (10th), Aaron Nola (12th), and Noah Syndergaard (18th).

While it might seems there’s some luck involved for those at the bottom of the list, batting average on balls in play doesn’t seem to have much to do with it. For example, Nola (.331) and Syndergaard (.337) both have higher BABIPs than Fernandez (.316), while Salazar has a BABIP (.269)Ã‚Â right in the neighborhood of guys likeÃ‚Â Kershaw (.262) and Arrieta (.259). As Bradley Woodrum of The Hardball Times pointed out last year, there isn’t much of a correlation between BABIP and batted ball speed:

These stats do so very little to predict BABIPÃ¢â‚¬â€in part because Ã¢â‚¬Å“hard contactÃ¢â‚¬Â can be deep fly balls, and fly balls have the worst BABIP of all non-infield-pop-ups. And typically, weak or medium contact results in ground balls, and those have a higher BABIP.

A similar story was told last year, asÃ‚Â Fangraphs’ Craig EdwardsÃ‚Â wrote aboutÃ‚Â inÃ‚Â September. Though there are more great pitchers at the top of the list than the bottom, it’s still difficult to say with certainty that low exit velocity equals success. Edwards did an evaluation of exit velocity for pitchers, and determined a slight correlation between FIP and exit velocity that largely ties in to a pitcher’s ability to prevent home runs. This makes sense, as the average exit velocity on home runs this year is 103.4 mph. That said, home runs typically make up a small percentage of batted balls, so it’s still difficult to read into this too much.

With all of this in mind, let’s look at the Reds’ leaders in exit velocity this season: 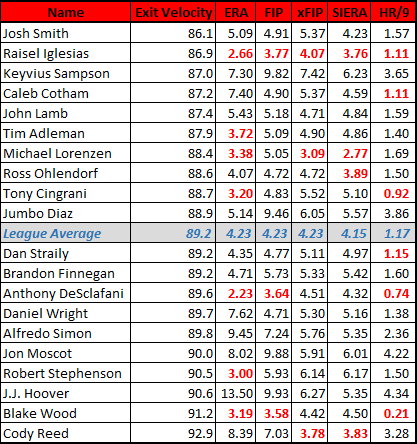 (Feel free to take a moment to gather yourself after seeing some of the unsightly numbers.)

The only Reds pitcher withÃ‚Â better-than-average numbers across the board is Raisel Iglesias, with Michael Lorenzen posting superior numbers in several areas, as well.

How do Edwards’ conclusions hold up here?

There seems to be some relationshipÃ‚Â between exit velocity and home run rate. Several of the pitchers giving up a lot of long balls are also allowing a lot of hard contact (Cody Reed, J.J. Hoover, Jon Moscot, Alfredo Simon), though there are some obvious outliers (hello, Keyvius Sampson and Blake Wood).

Based on the Reds’ numbers, there’s nothing all thatÃ‚Â significant to take away from ERA and ERA estimators. There are more pitchers with below average exit velocities who also have a below average ERA, xFIP, and SIERA, but not by much. And whateverÃ‚Â correlation is there has to be taken with a grain of salt. The estimatorsÃ‚Â heavily take strikeouts and walks into consideration, which have nothing to do with exit velocity off the bat. Moreover, this is a small sample size for many players, so it’s difficult to read into the data all that much.

Basically, I wrote all of that to say that there isn’t a whole lot to say about exit velocity right now. (But hey, I did all the research, so I might as well share it with you guys, right?)

At this point, it doesn’t factor into any statistic directly, making it difficult to make any real connections. Many of the best pitchers in baseball hold opposing hitters to low batted ball speeds, but others allow hard contact more frequently and still manage to get great results. There are reasons to think exit velocity matters for pitchers to some extent, but much more data is needed before we can make any definitive conclusions about what itÃ‚Â means for pitchers and whether it’s a “repeatable skill,” as Craig Edwards put it. But Statcast has gotten the ball rolling, and we’ll learn even more in the coming years.