I’m sure you’ve all heard the title of this column uttered by curious hapless on-air personalities at some point or another. But what does it mean? At the base level, it means a particular batter hits well when the pitcher throws fastballs.Ã‚Â  As a corollary to this, I’ll say that ALL major leaguers are good fastball hitters.Ã‚Â  It’s kind of in the job description, and you likely can’t make it all the way to the bigs without knowing how to handle the hard-and-straight pitches! How can we separate who is better at this skill however?Ã‚Â  And how can we figure out if someone is a good change-up hitter? A good curveball hitter? I’ll tell you!

Something I’ve only recently begun to pay attention to are pitch values.Ã‚Â  More precisely, they are known as pitch type linear weights, but pitch values sounds a lot better and is more intuitive.

The basics are as follows:

1) We can classify each pitch type thrown to a batter
2) We can identify the outcome of that pitch (strike, ball, out, hit, etc.)
3) We can assign a value to each of those outcomes
4) We can sum the outcomes to arrive at a metric!

Seems easy right?Ã‚Â  Well, using the RE24 framework, as well as some more math that breaks values down to the per-pitch basis, rather than the per-at-bat basis, it is quite easy!

Regarding #1 above, I will note that both Baseball Info Solutions (BIS) and PITCHf/x classify pitch types.Ã‚Â  I will be using the BIS classifications.

Think about it this way; if you’re a batter who never swings at sliders in the dirt, but a league-average hitter does swing at sliders in the dirt, you are more skilled against sliders (assuming similar outcomes when you make contact). Makes sense, right?Ã‚Â  Our patient hitter will accumulate value when the pitcher throws sliders because he’s getting himself into a 1-0 count, or a 2-0 count.Ã‚Â  When you are ahead in the count, you are more productive.Ã‚Â  It’s one of those immutable facts of baseball.Ã‚Â  Every hitter in history is better hitting 3-0 than 0-2.Ã‚Â  So, shouldn’t you get credit for getting yourself into good counts?Ã‚Â  I think you should!

The above example is a simple way to think about how these numbers can be interpreted.Ã‚Â  As with many useful metrics, pitch values are scaled to a league-average value, which happens to be zer0.Ã‚Â  Then, the metric can be scaled to a per-100-pitch basis to eliminate the need to say Player A has faced 100 fastballs while Player B has faced only 80 fastballs.Ã‚Â  What we arrive at are our pitch weights.Ã‚Â  The metric is written as “wFB/c.”Ã‚Â  The “wFB” portion shows you are using the linear weights on fastballs (FB). You could also have “wCH” for a change-up, for example. The second portion with the “/c” means “per 100 pitches.”Ã‚Â  Don’t ask me why they used the letter C, because I do not know!Ã‚Â  Perhaps they are reliving their high school Latin class…

So, if someone has a wFB/c of 1.50, that means this player produced 1.5 more runs than a league-average fastball hitter per 100 fastballs seen.

I know you are now just dying to see how our Reds rank, right?Ã‚Â  I hope so, or this column has been a spectacular failure!

Let us look at fastballs to begin: 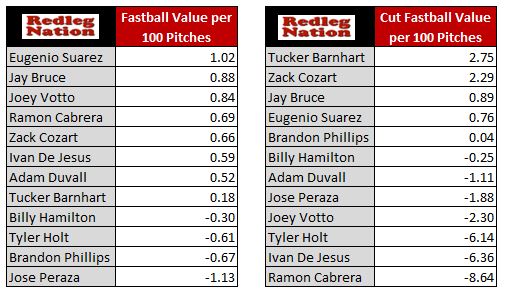 The generic term “fastball” includes both the 4-seam and 2-seam variety.Ã‚Â  I also included cutters here, since they are a type of fastball.

Cutters are a different story.Ã‚Â  Although classified as fastballs, they require a different type of skill to hit, apparently.Ã‚Â  Also, cutters that move back over the plate from the inside or outside (back door or front door, depending on handedness) are commonly taken for strikes by some batters, thus lowering their overall wCT/c.Ã‚Â  Conversely, if someone is very good at taking cutters for balls, their wCT/c might be higher than expected.Ã‚Â  Because of this interaction, we see a larger range.

We’ll next look at breaking balls: 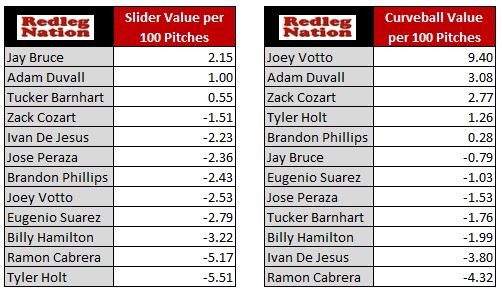 If given a guess, I doubt many of us would have identified Jay Bruce as the best slider hitter on the team.Ã‚Â  Again, it would be more accurate to say Bruce has been the most valuable against sliders, not necessarily the best hitter.Ã‚Â  If Bruce is chasing fewer sliders in the dirt or outside this year, it makes sense that he’s doing well against the pitch.Ã‚Â  To find out these types on things, we can look on sites like Brooks Baseball, which will show us swing rates against any type of pitch, as well as contact rates and slugging.Ã‚Â  If anyone desires to dig deeper, I recommend starting at Brooks Baseball and trying to find out why Bruce has been so good against sliders this year.Ã‚Â  I think you’ll find the experience rewarding!

Regarding curveballs, Joey Votto is a man among boys.Ã‚Â  His 9.4 runs above average (RAA) figure for wCB/c is #1 in the National League by almost 50%.Ã‚Â  The guy in 2nd is Aledmys Diaz of the Cardinals and he’s in the mid-6s.

When Votto puts a curveball in play, he’s 11 for 17 (.647 BA) with 2 homers.Ã‚Â  Also, we can safely assume Votto chases fewer curves out of the zone than just about anyone else because, well, he swings at fewer pitches of all types out of the zone than just about anyone.Ã‚Â  Combine good results on contact with good discipline, and NL pitchers would be wise not to throw Votto many curveballs.

Finally, we’ll look at off-speed pitches.Ã‚Â  This section will consist of only change-ups because splitters have weird results caused by he fact that BIS doesn’t classify splitters very well (in my opinion). Also, it is a little-used pitch giving us smaller samples. 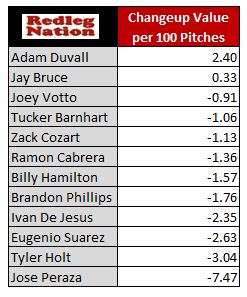 Ouch.Ã‚Â  Only 2 Reds are above-average at handling change-ups.Ã‚Â  Seeing things like this make it no wonder that guys like Jeremy Hellickson (on Opening Day) do so well against our Reds.

I really like seeing Adam Duvall doing well in this category, because with the type of player he is, as long as he can differentiate between fastball and change-up (seems like he can), he always has the chance to learn how to lay off sliders and curves.Ã‚Â  That’s a solid blueprint for a successful hitter.

I know there was no big reveal and nothing ground-breaking here, but I just wanted to introduce everyone to a perhaps new metric that I’ve been studying lately.Ã‚Â  It gives us yet another way to dig deep and find out what is happening with players who may be streaking or slumping.Ã‚Â  Perhaps a good change-up hitter has faced 5 change-up pitchers in the last week, which might be artificially inflating his stats, for example.Ã‚Â  Regardless, I hope you had a decent time reading!

Pitch value figures are courtesy of BIS via FanGraphs.