Let’s start with his failures. Jay BruceÃ¢â‚¬â„¢s career with the Reds has been full of them.

For example, Bruce has never choked a woman.

To be brutally candid, when it comes to trouble with the law, Jay Bruce has been a complete flop. Heck, he didnÃ¢â‚¬â„¢t even get caught shoplifting t-shirts.

In terms of being a bad clubhouse guy, Bruce again has been a no-show. Jay Bruce has never complained about not making enough money. He hasnÃ¢â‚¬â„¢t shown the ingratitude of calling his teamÃ¢â‚¬â„¢s owner a liar. Bruce hasnÃ¢â‚¬â„¢t dictated the Reds play him in a certain position or hit in a preferred spot in the batting order. HeÃ¢â‚¬â„¢s never criticized a teammate or the training staff or put his own interest ahead of the teamÃ¢â‚¬â„¢s well being. Jay Bruce hasnÃ¢â‚¬â„¢t been in a locker room fight with a teammate or his manager. HeÃ¢â‚¬â„¢s never used an injury as an excuse for a lack of production.

With regard to league punishment, Jay BruceÃ¢â‚¬â„¢s track record is also riddled with nonperformance. Bruce has never been suspended for gambling or PED use or for fighting during a baseball game. He hasnÃ¢â‚¬â„¢t been banned from baseball. He’s only twice been ejected from a game.

Finally, in his relationship with the media and fans, Bruce has been a washout when it comes to petulance and indecency. Jay Bruce has never confronted a beat writer with a torrent of personal insults and profanity. He hasnÃ¢â‚¬â„¢t refused to talk to the local media because of something they wrote or didnÃ¢â‚¬â„¢t write about him. Not once has he criticized Reds fans for lacking enthusiasm. Jay Bruce has never been vulgar on a radio show. Bruce hasn’t thrown a ball into the stands in anger injuring a fan. Believe it or not, Jay Bruce has no record of sending profane messages through Twitter to fan groups.

Thankfully, heÃ¢â‚¬â„¢s never committed the mortal sin of walking too much.

Come to think of it, in the nine seasons he has worn the Cincinnati Reds uniform, Jay Bruce has without exception behaved in a professional, first-class manner.

(It’s necessary to add an aside here about evaluating the character of public figures. Fans and media types think we know the true nature of athletes based on the brief glimpses we’re allowed of their behavior. Too often, sports analysts rush to say so-and-so is a “great guy” based on a round of golf together, support for charities or the granting of an interview. But we’re really in no position to judge that person’s real makeup.)

That said, based on what we’ve witnessed, Jay Bruce has been an impeccable representative of the organization.

That is the litany of Jay Bruce’s negatives. On the other side of the balance sheet, he has a few accomplishments worth mentioning.

Bottom line, Jay Bruce has been a great player.

In light of this lopsided ledger, where does the mixed narrative about Jay Bruce come from? Why hasnÃ¢â‚¬â„¢t he won over fans in the way his record and manner indicate he should?

Two factors are at play. And one of them isn’t related to unfair nightly criticism from a certain Reds radio broadcaster.

Jay Bruce has been a victim of unreasonable expectations created by his own minor league performance. The Reds drafted Bruce in the summer of 2005 and by the end of 2007, the young outfielder from Beaumont, Texas was regarded as the consensus #1 prospect in baseball. Such was the lore surrounding Jay Bruce that even casual fan understood this, not just the prospect hounds. We were guilty of stargazing.

By the time of his much-anticipated debut on May 27, 2008 our hope for Jay Bruce had reached fever pitch. Bruce went 3-3 (plus two walks) that night. The Reds won. The Bruce hype train accelerated on its well-greased tracks.

I’ll confess that my adoration of Jay Bruce the player began that night. I was at GABP, fortunate to have a ticket in close proximity to the Reds on-deck circle. Before the game started, I spied Bruce swinging a bat in the camera well at the home-plate end of the Reds dugout. I took a chance, reached down and slapped my ticket against the wall and asked him to sign it. He obliged, moments before that first of his many hits for the Reds.

We wanted Ã¢â‚¬â€œ no, we expected Ã¢â‚¬â€œ Jay Bruce to be a perennial MVP candidate. HeÃ¢â‚¬â„¢s fallen short of that. As IÃ¢â‚¬â„¢ve written, in our yearning Jay Bruce was 50 percent better than league average. A big chunk of fans have had trouble with the reality that heÃ¢â‚¬â„¢s only been 20 percent better.

But even in that context, IÃ¢â‚¬â„¢m not sure I agree with the conventional wisdom that Jay Bruce hasnÃ¢â‚¬â„¢t won over Reds fans.

Do people go to the park to see him play?

And judging by the number of young fans Ã¢â‚¬â€œ as well as the not-so-young ones Ã¢â‚¬â€œ who wear his name and #32 on t-shirts and jerseys, so do others.

I go to see that cannon fastened to his left shoulder, the way he patrols right field in my teamÃ¢â‚¬â„¢s ballpark and that smooth, easy power at the plate. Jay Bruce is one Reds player you can count on to hustle every time he hits a ground ball.

And, of course, there was this.

Like thousands of other fans, I lingered in the delirium that September night to celebrate with the team from the stands. That group of hungry players, clad in postseason t-shirts and hats and drenched by various carbonated beverages was as elated as could be. The picture taking, backslapping, hugs and high-fives with fans seemed like it would never end. And not a single person wanted it to. 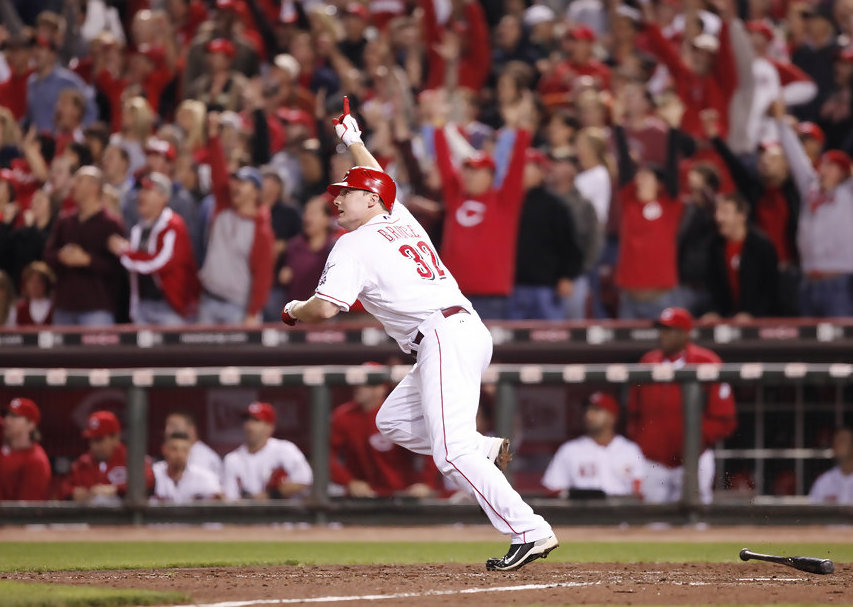 If one image could embody the 2010 and 2012 NL Central championships, it is Jay BruceÃ¢â‚¬â„¢s raised arm. Not the first-pitch home run off Tim Byrdak per se. That raised arm. That gesture became the exclamation point, punctuating the end of a painful 15-year drought. For me, and many others I suspect, it was a flashbulb memory.

At the time, Jay Bruce was 23 years old. Of the Reds current roster, only Jose Peraza is younger now than Bruce was that night.

Why the ledger of BruceÃ¢â‚¬â„¢s Ã¢â‚¬Å“failuresÃ¢â‚¬Â and accomplishments right now?

Because sadly, our days of watching Jay Bruce play in a Cincinnati Reds uniform are coming to an end. As is BRUUUUUUUUCE!!

One more home stand after the All-Star break to cheer for Bruce, if we’re lucky. Get to the park. Watch and appreciate Jay Bruce’s homegrown talent and class while you can.