In recent years, many new methods to evaluate pitchers have emerged.

With stats like FIP, xFIP, and SIERA, we now have the ability to more accurately measure a pitcher’s true skill, independent of the defense behind him that can make him look better or worse.

Tracking systems like PITCHf/x identifyÃ‚Â every pitch thrown, along with the movement and speed on each.

Statcast has given us even more information, measuring things such as perceived velocity on pitches, along withÃ‚Â exitÃ‚Â velocity and launch angles on each batted ball.

These systems are even ableÃ‚Â to track the revolutions per minute of each and every pitch thrown in the majors. As technology continues to improve, stats like spin rate are becoming a more popular way to evaluate pitchers and their repertoires.

The word is still out on how to completelyÃ‚Â measure what spin rates mean, but we do have a solid foundation to work from. Let’s attempt to break down spin rates for each pitch, and see how Reds pitchers rank (Note: For the sake of time, I only included pitchers currently on the active 25-man roster). MLB.com’s Mike Petriello did a nice job breaking down what spin rates for each pitch tend to mean Ã¢â‚¬â€ and how they relate to velocity Ã¢â‚¬â€Ã‚Â so we’ll use his articleÃ‚Â as a guideline. 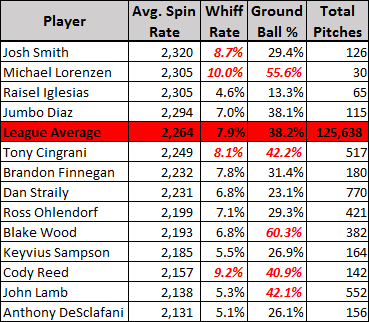 With a four-seamer, a higher spin rate typically means the ball is staying up in the zone, equating to more whiffs and fewer ground balls; a lower spin rate is the opposite. Spin rates that fall somewhere around the mean are usually hit the hardest. For the most part, this has held true with Reds pitchers. Of the four who are above league average in spin rate, two also have above average whiff percentages, while only two of the other nine can say the same. On the flip side, Michael Lorenzen is the only one above that red line who has a ground-ball rate higher than the 38.2 percent league average — and it’s in a small sample size.

Two-seamers tend to have a lower spin rate, causing them to drop more than a four-seamer. Naturally, this results in moreÃ‚Â ground balls when the pitch is put into play, which is pretty clear when checking out the stark contrast in the league averages between the two pitches. Strangely, the two Reds with the highest grounder rates are the ones with the highest spin rates, though neither have even thrown the pitch more than 20 times this season.

Sinkers tend to have the same results as two-seamers: lower spin rate, more ground balls. Only three Reds currently on the roster have thrown a sinker with any regularity, and all have below-average spin rates. Hence, all three also have below-average ground-ball rates on the pitch. 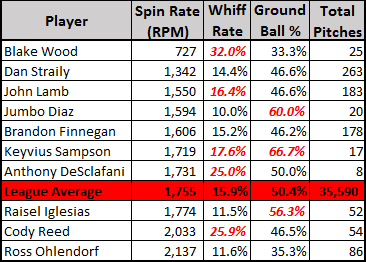 Changeups have a significantly lower spin rate than fastballs, whichÃ‚Â can result in the pitch dropping at the last second and hitters smacking the ball right into the ground. Combining with the movementÃ‚Â is that the pitch is supposed to look like a fastball and is meant to fool the hitter with the decrease in velocity, meaning it has a much higher swing-and-miss percentage. Some pitchers manage to have success with high spin rates on their changeups, but fewer revolutions per minute typically brings more success. Seven Reds have changeups with a lower spin rate than league average, with four of them boasting strikeout rates better than the mean and Brandon Finnegan falling just under.

By the way, Blake Wood’s 727 rpm changeup is the lowest in baseball. With a whiff rate that high, it’s a bit strangeÃ‚Â that he doesn’t throw it more (it’s possible that Statcast is registering it as another pitch).

Some of the best curveballs have very high spin rates and get a whole lot ofÃ‚Â whiffs due to the tremendous amount of movement on the pitch. Josh Smith is a perfect example of this. Of the 172Ã‚Â pitchers who have thrown the hook more than 50 times in the 2016 campaign, the right-hander is 16th in spin rate and touts a ridiculous swing-and-miss percentage.

Anthony DeSclafani gets a table all to himself as the only Red to featureÃ‚Â a knucklecurve. The pitch can vary wildly in its spin, typically resulting in lots of empty swings and grounders. DeSclafani isn’t missing many bats with the offering — especially compared to last year — but he doesn’t throw it all that often, either, so it hasn’t come back to hurt him all that much. On the bright side, he has managed to get a ton of ground balls with the knucklecurve when using it. 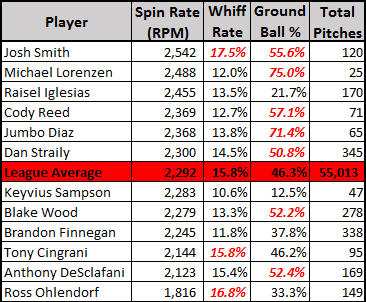 Like the knucklecurve, there isn’t a high or low mark to shoot for when it comes to spin rate on a slider. Some pitchers throw it effectively with a lower spin, some have success with a higher spin.Ã‚Â The Reds perfectly displayÃ‚Â this, as Smith is effective with lots of rotation, while Ross Ohlendorf’s best pitch is his slider despite having one of the lowest spin rates in baseball.

Another pitcher who gets a table of his own is John Lamb. High spin is ideal for a cut fastball, and Lamb doesn’t have that. His swinging strike percentage is nowhere close to the league average and it’s one of his worst pitches — hitters are batting .365/.441/.500 against it.