With apologies to everyone who believes the Reds will contend next year, they won’t–it’s foolhardy to think otherwise. I know, I know: “stay optimistic”Ã‚Â and “anything can happen” and “baseball is a funny game” and “just look at the prospects!”Ã‚Â Look, I hear you. On paper, the Reds could have a shot to scoop up a Wild Card spot, but when does anything work out the way it does on paper?

I’m prefacing this piece with that little nugget of unfortunate reality not to be a Debbie Downer or a naysayer but instead to put a simple claim in perspective: The next time the Reds make the postseason, Devin Mesoraco will not be their starting catcher.

As much as I love Devin, his hip is shot, his arm is shredded, and for goodness sake the man has to sleep sitting up. When he returns, he will have only played in 39 games since his breakout 2014 campaign. Not exactly a vote of confidence for the Reds 2017 chances. On the bright side (for Devin), it’s not like the Reds have anyone itching to steal his job. Which begs the question, at which step did the organization that produced the greatest catcher of all time go so wrong as to leave the catching situation in such disarray?

The Reds need a new guide for cultivating (or scavenging for) premiere backstops. Luckily,Ã‚Â a 21 year-old Internet blogger with no front office experience–i.e. me–has the perfect plan for them.

I wrote a few weeks ago aboutÃ‚Â Tucker Barnhart’s hot start and surprising contributions in Mesoraco’s absence. Since then, Tucker’s OPS has dropped over 50 points and his ISO has dropped 40. Tucker hasn’t entirely turned into a pumpkin, but he’s definitely closer to a fall-time vegetable than horse-drawn carriage at this point. Maybe a squash.

Besides Tucker,Ã‚Â Ramon Cabrera takes the rest of the catching opportunity, but other than sharingÃ‚Â a name with Ramon Hernandez, which fills the nostalgia quota, Cabrera offers little to the organization. His .605 OPS and and 59 wRC+ land him just a tick past ‘Below Average’ in the ‘Poor’ region of player evaluation. On the whole, Reds catchers have a .636 OPS in 2016, the worst mark since .625 in Devin Mesoraco’s rookie season. Since 1970, only eightÃ‚Â Reds catching corps have had an OPS equal to or worse than the .636 mark. The average catching OPS of Reds playoff teams in that timeframe? 0.759. 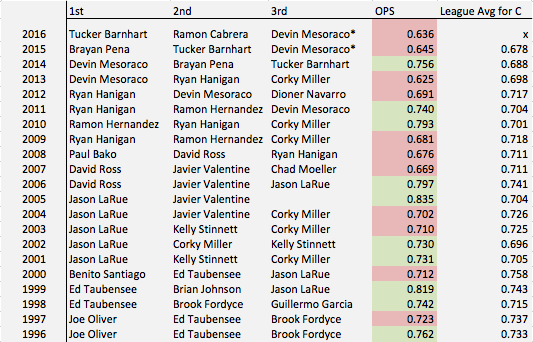 For those prospect hopefuls, itÃ‚Â isn’t any better on the farm. The Reds top catching prospect is hitting .196/.267/.272 in A ball, and the guy ranked behind him was drafted about three weeks ago. At AAA, there are two 28 year-olds who can’t even crack a .625 OPS.Ã‚Â Corky Miller might just be the most promising prospect in the system, and he’s there as a coach.

For the past ten years, the Reds have followed a defense first catching mindset. David Ross, Javier Valentine, Paul Bako, Ryan Hanigan, Ramon Hernandez, Brayan Pena, and Tucker Barnhart are all guys who will give back in glove what they give up in bat. Even top prospect Tyler Stephenson is a glove first guy. The problem with that philosophy is quantifying glove contributions past a simple eye test is pretty much impossible. Just look at Tucker’s DRS and Def numbers for this year: one has him below averageÃ‚Â (-3 DRS), the other decently above average (6.2 Def) despite largely looking at the same variables.

Devin Mesoraco was always the exception to this philosophy: the lone Reds catcher who could hit. But with his hip and shoulder problems, it’s iffy as to whether Devin will hit for average, much lessÃ‚Â power.

The Reds no longer play in a weak division where they can afford to sacrifice a spot in the lineup to a slick glove. The Cubs and Pirates both have lineups that eschew the bloop and a blast philosophy the Reds love. Their version falls more along the lines of blazing line drive after blazing line drive with a sprinkle of blast for the fans.

Targeting bat-first catchers in the draft* and in free agency needs to become the Reds philosophy because they won’t out hit (or really, out pitch) the rest of the Central otherwise.

*I discredited Chris Okey, the Reds second-round pick this year, pretty quickly above, but to the organization’s credit, he did hit in college. However, he projects to be a .250 hitter in the pros, which is about what Tucker Barnhart is, so maybe I’ll delay kudos for a bit.

3. Randomly acquire catchers in trades that hopefully will turn their entire career’s around ala Adam Duvall, make an All Star game, and lead the Reds to the playoffs for one miracle run in 2018.

Alright, so this step requires a bit of suspended disbelief, but that’s been the front office’s catchphrase for so long that I’m going to co-opt it. Right now, the Reds catching situation boils down to three options.

That’s it. For all the talk of the Reds being a promising young team, they sure are putting a lot of faith in the American health system. Acquiring young catchers as throw-ins in the inevitable Jay Bruce trade isn’t as ridiculous as it sounds. Okay, it’s pretty ridiculous, butÃ‚Â such is the way of threeÃ‚Â step success guides. They rarely work how they’re intended.

For the moment, the Reds don’t need anything more than Tucker Barnhart. He’s playable, likable, healthy–all a cellar dwelling team can ask for. Tucker is what he is–the worst Reds everyday starting catcher since…well, we had Brayan Pena last year. Tucker is status quo, which has never made a team great.

Devin Mesoraco won’t be the catcher that directs a playoff run for this team; that I’m sure of. ButÃ‚Â if not him, then who? It doesn’t seem like anyone knows or is willing to figure it out. As long as Reds fansÃ‚Â focus on the Emerald City of pitching depth, the man behind the curtain tends to fade into the background.

Statistics courtesy of Baseball-Reference and Fangraphs.