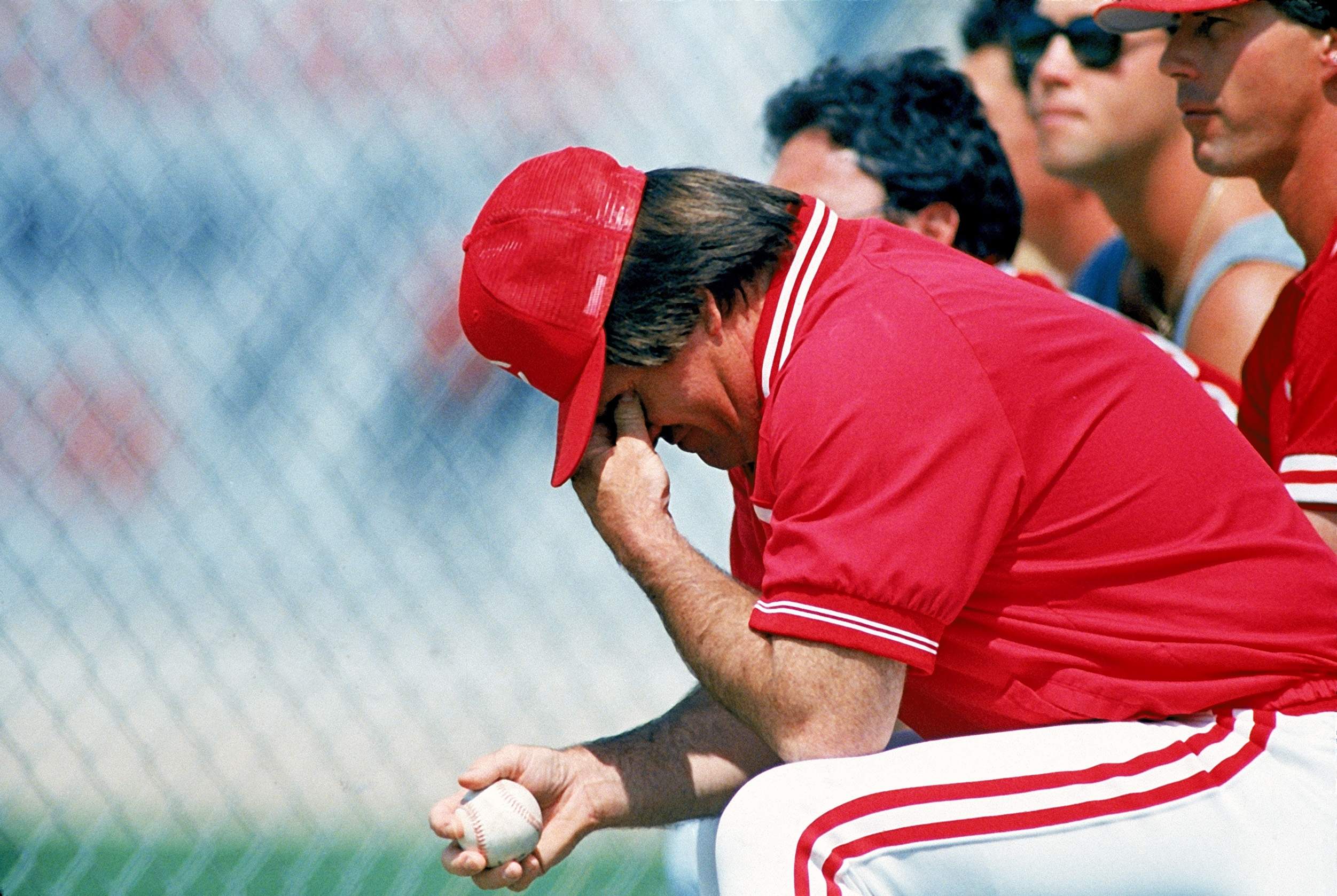 Consider this statement for a moment. A paradox. If a ballplayer were to announce it, we would share in the contradiction. Because if a ballplayer declares all his brethren to be lairs, then he in fact is calling himself a lair and in that sense, how can we ever believe what he is saying? String that logic together, you have to ascertain that in order for the paradox to exist, a statement which forms the basis must be true. We now, through one line, have witnessed a self-referential paradox.

It seems like something Pete Rose would have said off the cuff to a reporter. Something muttered as a kid in 1960. Simply trying to make the paper, get his name inked in the rags of record. Or it could have been professed at the height of his power in 1975, as he held court in front of his locker en route to Boston for game six. A seemingly meaningless line that a group of reporters could have construed as Pete being Pete. What a card, what a gas. Or maybe it could have been solemnly mentioned with whispered breath in 1989, faced with a firing squad of journalists as he announces his immediate banishment, his shrouded betrayal to the only thing he ever really cared about. Or rather, in another dimension, itÃ¢â‚¬â„¢s the shortest Baseball Hall of Fame induction speech ever. Burned on his non-existent plaque in raised bronze, like an asterisk in the record book. Forced to align himself not with his poetic gasoline suit, but a paradox. Still hell of course, but itÃ¢â‚¬â„¢s better than purgatory.

Our favorite heroes are tragic ones. ItÃ¢â‚¬â„¢s the tragic that lose, that scar, that die young, that fall hard, that are stripped and shackled, naked to the world. Pride comes before the fall. We know that and even though Pete wrote more books than he read, he knows that. For all the pride that Rose accumulated over the years, for his most games played (3,562), most at bats taken (14,053), most singles (3,315), most seasons with 200 hits or more (10), most winning games (1,972), most total times on base (5,929), for most hits all time (4,256), with all of this on the diamond he continues to fall. His body crashing through the cushion of his records head-first, his broad shoulders laying waste to his accomplishments, hurdling recklessly like he did against Denny Doyle or Ray Fosse, he knows no other way to go. Poor Pete, someone should have explained it to him. They all love you for the drive on the diamond; it just doesnÃ¢â‚¬â„¢t translate well off of it.

ItÃ¢â‚¬â„¢s an arms-length reverence for Pete. His standards are perceived higher because he could hit a round ball with a round bat, squarely. We salute what he did, what none of us could do but we slander, for his trespasses, for what we all could have done. HeÃ¢â‚¬â„¢s not a god, heÃ¢â‚¬â„¢s not a deity, he is us, a mere mortal shuffling along the coil. We love him for that, we hate him for that.

Ã¢â‚¬Å“All baseball players are lairs.Ã¢â‚¬Â This isnÃ¢â‚¬â„¢t a Pete quote. ItÃ¢â‚¬â„¢s not a quote by any baseball player I know (although Bill Ã¢â‚¬Å“SpacemanÃ¢â‚¬Â Lee alludes to it, ironically in defense of Pete), instead itÃ¢â‚¬â„¢s from a Cretan (the place not the pejorative term), an ancient philosophy spoken by Epimenides, conceived 2,000 years before Rose was born in the west-side of Cincinnati. RoseÃ¢â‚¬â„¢s tragedy is that he twisted his determination, skewed and bent his ambition to an un-honorable direction and in sport, honor is really all you have.

Poor Pete. LetÃ¢â‚¬â„¢s just have a beer together and you can tell us why. WeÃ¢â‚¬â„¢ll try and wrap our minds around your brain’s different wiring. WeÃ¢â‚¬â„¢ll never understand it, weÃ¢â‚¬â„¢ll try, but never fully. Your faults arenÃ¢â‚¬â„¢t greater than ours, itÃ¢â‚¬â„¢s just that we never had immortality in our grasp like you did and now you have to settle for infamy instead. An antediluvian paradox you never quoted, but continue to live out.