As players get healthy and Super Two concerns go by the wayside, the Reds’ roster is starting to look more and more like people thought it would when the 2016 season began. The youth movement is a full go, and another key piece of the future arrived over the weekend when Cody Reed made his first start in the majors.

The left-hander is considered a top-three prospect in the organization and a top-100 prospect in all of baseball by pretty much every source that evaluates such things. Needless to say, most Reds fans were excited to see what he could do and many were glued to their TVs to see his debut on Saturday against the Astros in Minute Maid Park.

Reed didn’t get the win, but gave Reds fans plenty to be excited about with his debut andÃ‚Â performed as well as could be expected for a rookie in his first major-league game. The southpawÃ‚Â fired seven innings (which is a pretty big accomplishment in itself for the Reds’ 2016 rotation) and allowed four runs on six hits, while walking three and striking out nine.

The most encouraging aspect of his debut was the strikeout total. Reed only used two of his three pitches on the day, but those were all he needed. He was able to set hitters up with a mid-90s four-seam fastball — which topped out at 96.4 mph and averaged 93.1 — and finish them off with the killer slider we’ve all heard about in the scouting reports. Of his nine punch-outs, the slider went for the final strike on six of them. The slider (which both PITCHf/x and Statcast registered as a changeup, interestingly) had an average velocity of 87.2 mph.

Here’s a look at a handful ofÃ‚Â nine strikeouts:

As you can see, he loves to throw the slider to his glove side low and away, which proved to be a pain for batters from both sides of the plate to hit.

His slider/changeup/whatever-you-want-to-call-it got a ridiculous amount of swings and misses, with a whiff rate of 32.4 percent — or 11 of the 34 times he threw it. Astros hitters only put it into play eight times and did not get a hit off of it, hitting a ground ball half of the time. In all, Reed got whiffs on 15 of his 92 pitches, including on seven of his strikeouts.

Another promising aspect of Reed’s debut was his overall control. Sure, he walked three, but one of those — which came to the first batter he faced, George Springer — can reasonably be chalked up to nerves. Reed’sÃ‚Â walk rate has declined in each year of his professional career, so that isn’t a huge concern moving forward. He threw 62 of his 92 pitches for strikes and threw a first pitch strike to 71.4 percent of the batters he faced, for the most part displaying a nice command of his pitches.

Of course, Reed’s debut was far from perfect. After walking the first hitter of the game, he gave up a two-run homer to next batter Marwin Gonzalez to give the Astros an early 2-0 lead. He demonstrated poise by settling down over the next six innings, but got burned by the long ball again in the seventh inning, this time on a towering shot by Evan Gattis for two more runs.

Predictably, both home runs came on a fastball that he left up in the zone. 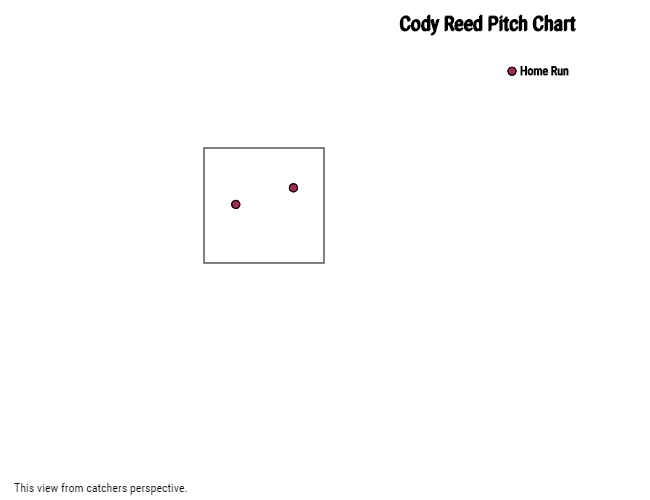 The one on the leftÃ‚Â is the homer given up in the first inning. It was a 95.2 mph heater that he tried to get inside to Gonzalez on an 0-1 count. He did get it in, but didn’t get it in far enough. Perhaps, especially with the velocity on the pitch, the end result would’ve been better against minor-league competition. Against a major-leaguer, the mistake got punished, as the Astros first baseman turned on it and sent it into the Crawford Boxes in left field.

The pitch on the right is the late homer Reed allowed. The problem is pretty obvious: a 91.3 mph, first-pitch fastball left up and over the middle of the plate, an offering that a power hitter like Gattis jumps all over.

Aside from the two dingers, Reed had a fantastic debut. HeÃ‚Â is certainly going to have hiccups in his first taste of the major leagues, as he did on Saturday. However, he’s already a polished pitcher at 23 years old and will only get better as time moves on. Reds fans should be excited to watch Reed — and the club’s many other young pitchers — develop in the coming months and years.