Yesterday I made a dropoff at the door of Good Samaritan Hospital, and saw a man trundling from the parking garage, holding a tiny outfit on a plastic hanger, tags dangling from the little arm.

I had the following reactions: 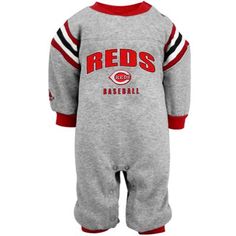 -“I do not want to be around when this guy hands an unwashed, tags-still-on winter fleece sleepwear ensemble to a woman who is well past her last shot of pain meds and tells her to place her newborn inside it on a 92 degree day.”

One man’s birth is a woman’s fourteen-hour labor. I wouldn’t know the details, exactly; I’ve never experiencedÃ‚Â another person shooting out of my body myself, but the arrival of a newÃ‚Â personÃ‚Â is the encapsulation of the entire human existence. It hurts and it’s difficult and it’s messy and it leads to a great deal of joy. The pregnancy comes to an end, but independence begins.

There’s a reason why more people show up to baptism parties rather than births.Ã‚Â What we are watching on the field with the Reds right now hurts. It’s difficult and it’s messy but it’s not without its Bruce homers and Hamilton diving grabs. It’s not entirely pleasant to watch, but the import of the moment we’re occupying together here carries us game to game.

That’s why we fret so much over the draft and each footfall of each new import hauled up from Louisville. We’re hovering. We are midwiving the most difficult of births: Ã‚Â A potential championship team. There’s a lot of waiting and all kinds of vital signsÃ‚Â to monitor.

The biggest fear amongst the fanbase is an eternal labor, a life of forever expecting and never delivering. There is rebuilding, and then there is delusion. Is this club the 1982 Reds, a horrifying but temporary freefall ? Or is it the Expos, perpetual losers and too lame to even be lovable about it?

There’s always hope in new life. Sometimes it all depends on how you dress it. Sometimes it’s just beautiful for what it is.

And sometimes… you have this bullpen.