It has been difficult lately for the Reds to get interleague wins on the road. The Reds entered play on Friday just 3-19 since the start of 2014 in road games against the American League.

John Lamb gave the Reds five strong innings, and then the Reds bullpen pitched very well over the course of the next seven innings. Eugenio Suarez delivered a go-ahead RBI double in the top of the 11th. Later in the inning, and suicide squeeze from Ramon Cabrera would give the Reds a 4-2 lead.

Tony Cingrani made things interesting in the bottom of the 11th by bringing the winning run to the plate. He was however able to getÃ‚Â Carlos Correa to ground out to end the game, and the Reds took game one of the three game series, 4-2. 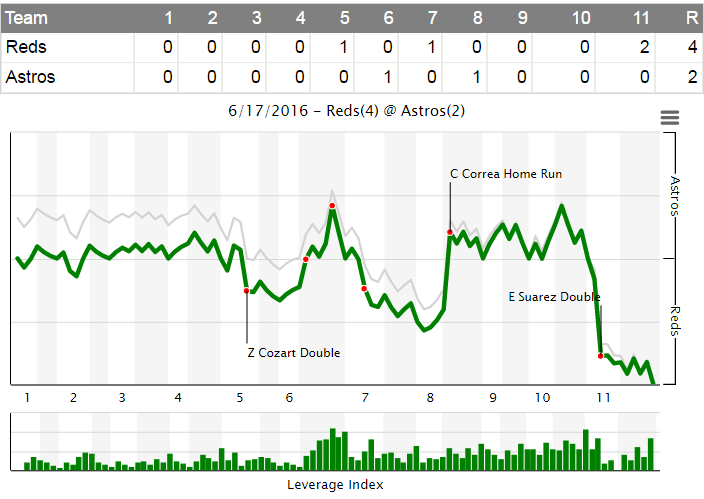 According to FangraphsÃ‚Â WPA statisticÃ‚Â (winning percentage added), the most important play of the game wasÃ‚Â Eugenio Suarez RBI double with 0 outs in the top of the 11th inning, giving the Reds a 3-2 lead.Ã‚Â That play increased the Reds chances of winning by 30.6% (from 58.2% to 88.7%).

Lamb pitched really well for the most part tonight. Through the first five innings, his line was: 5.0 IP, 2 H, 0 R, 2 BB, 8 K. You can’t pitch much better than that. He ran into some tough luck in the sixth inning. The first batter had a bunt single, and ended up on second because of a Suarez throwing error. He got a force out later in the inning, but walked two more batters and exited with the bases loaded.

The most encouraging thing tonight from Lamb was seeing him strike out some hitters again. His previous season high was 5 K, and his K/9 this year is only at 4.71. It was 10.51 last year, and he was projected by ZiPS for 9.01. It should be noted that the Astros have the third highest strikeout rate (24.9 K%) in the MLB.

Billy HamiltonÃ‚Â returned from the DL today. His first at-bat was a disaster. Billy came to the plate with runners on the corners, and one out. He struck out on three pitches. Billy however had two hits in his next two at-bats. Don’t look now, but Hamilton is hitting .274/.312/.396 on the season. Brandon Phillips is hitting .259/.297/.397 for comparison.

Joey VottoÃ‚Â extended his on-base streak to 18 games with a walk in the first inning.

Jose PerazaÃ‚Â had a beautiful bunt single in the 5th inning. He then showed off his wheels, as he scored from first on a Cozart double hit hard off the wall. I’d say most MLB players would not have scored on it.

Blake WoodÃ‚Â had been the Reds best reliever so far in 2016, but he couldn’t get the job done tonight. He allowed his first home run since 2011, and Carlos Correa got all of it.

TheÃ‚Â Reds defenseÃ‚Â was not good tonight. There were bad plays from Votto, Suarez, and even Cozart. Jay Bruce did make a really nice catch later in the game though.

I was watching the Astros TV broadcast tonight. WhenÃ‚Â Adam DuvallÃ‚Â stepped up for his first at-bat, their play by play broadcaster Bill Brown saidÃ‚Â “We’ve been anxious to see Adam Duvall after looking at the box scores.” It is pretty cool that Duvall has developed that type of reputation. Who would have ever thought that?

Also, if you are an out of town Reds fan and have MLB.tv, I highly recommend watching the Astros TV broadcast. They do a really good job, and use advanced stats a bit. Tonight, they were talking about how Eugenio Suarez has been unlucky this season because of BABIP. I about fell out of my chair.

The Cody Reed era begins for the Cincinnati Reds tomorrow. Reed will be making his MLB debut. He is currently the #60 prospect in all of baseball (Reds #3) according to MLB Pipeline. Reed will have his work cut out for him, as he will face last year’s AL Cy Young winner, Dallas Keuchel.