Jay Bruce is having a resurgent season at the plate.Ã‚Â  As of this writing, Bruce is slashing .273/.329/.581 with a 135 wRC+.Ã‚Â  If the season ended today, this would be BruceÃ¢â‚¬â„¢s most prolific hitting season by around 11% on a per-plate-appearance basis.

This offensive uptick has likely increased Jay BruceÃ¢â‚¬â„¢s trade value a fair bit.Ã‚Â  Thursday on a live baseball chat, the chater responded to a chatee that he feels Bruce is now likely to bring back a Top 100-type prospect in a potential trade.Ã‚Â  If heÃ¢â‚¬â„¢s correct, that is a great thing for the Reds.Ã‚Â  As recently as Opening Day, Bruce had next to no trade value.

Lost in all the talk about what Bruce is doing at the plate is the elephant in the room; defense.Ã‚Â  Because of his defensive metrics, BruceÃ¢â‚¬â„¢s overall WAR stands at 0.0 on FanGraphs and 0.4 on Baseball Reference.Ã‚Â  FG uses Ultimate Zone Rating (UZR) as the input for its defensive portion of WAR, while BR uses Defensive Runs Saved (DRS).Ã‚Â  The two competing metrics generally agree about the quality of a player, but donÃ¢â‚¬â„¢t always agree in the magnitude.Ã‚Â  Both are measured as “runs above average for the position.”

Today, I want to explore what could be going wrong for Bruce and causing the defensive metrics to hate him so much.Ã‚Â  As recently as 2013, Bruce was thought of as a Gold Glove-caliber defender.Ã‚Â  Can someone really decline this quickly?

To begin, IÃ¢â‚¬â„¢d like to present a chart showing BruceÃ¢â‚¬â„¢s UZR and DRS metrics since 2009.Ã‚Â  The graph also shows the midpoint between the two measures, which is a nice (and valid) measure because both UZR and DRS have the unit of Ã¢â‚¬Å“runs.Ã¢â‚¬Â 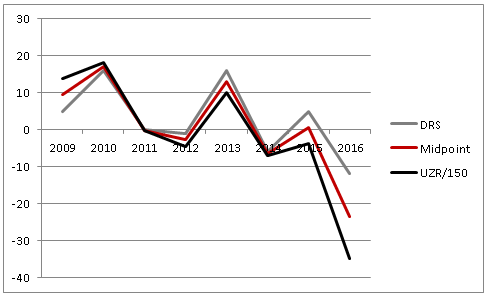 As we can see here, if you mentally smooth out the peaks and valleys, Jay Bruce is in a career-long decline on defense.Ã‚Â  This is exactly what you expect to see for most defenders who are getting older and slower.Ã‚Â  Defensive skill is generally thought to peak very early (think 20 years old) due to the fact that playing well at most positions it is tied to speed and agility, two things that decline from an early age.Ã‚Â  The corner infield spots are two notable exceptions, since playing them well is more about reaction and positioning (and arm, for 3B).

Also of note, the enormous cliff off which these poor lines have fallen, as gravity inexorably takes its horrible toll.Ã‚Â  Does gravity affect graphs? Hm.

(Note: DRS isn’t scaled to a full-season basis like UZR/150, so that is why DRS is way higher on the graph for 2016.Ã‚Â  As the season nears its culmination, the two number are likely to get a bit closer than they currently are.)

Since IÃ¢â‚¬â„¢m a fan of UZR over DRS, IÃ¢â‚¬â„¢d like to dive in and take a look at UZRÃ¢â‚¬â„¢s components to see if we can identify why Bruce is at such a highly negative rating so far this year.

(Mandatory disclaimer: Defensive metrics are highly variable and take a long time to become even somewhat reliable.Ã‚Â  Folks disagree on exactly how long, but a safe consensus seems to be three seasons of data is required.Ã‚Â  This becomes problematic since a playerÃ¢â‚¬â„¢s true talent level can change over the course of 3 seasons, but these types of metrics are the best we have at the moment.)

First, IÃ¢â‚¬â„¢d like to bring up a related topic.Ã‚Â  This topic is Revised Zone Rate (RZR).Ã‚Â  This easy to understand metric is simply how many outs you create on balls hit to your zone divided by how many balls were hit to your zone.Ã‚Â  Since the people classifying this information have the ability to measure where the ball goes on each play, they can easily say whether or not a ball is in the right fielderÃ¢â‚¬â„¢s domain without introducing any sort of bias.Ã‚Â  LetÃ¢â‚¬â„¢s check out BruceÃ¢â‚¬â„¢s RZR since 2009: 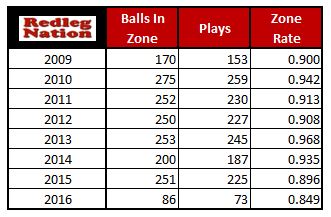 Before last season, BruceÃ¢â‚¬â„¢s RZR had never been below 90%.Ã‚Â  Last year it was barely below 90%.Ã‚Â  This year, it is below 85%.Ã‚Â  While an extra missed play every 20 chances may not seem like a ton, over the course of the season weÃ¢â‚¬â„¢re talking about 10-12 missed outs.Ã‚Â  That means probably something like 6-8 extra singles and 4-6 extra doubles.Ã‚Â  Equate those extra hits for the opposition into runs, and weÃ¢â‚¬â„¢re easily looking at nearly a winÃ¢â‚¬â„¢s worth of runs.Ã‚Â  All from simply not making plays on balls hit into your zone.

From 2009 to this season, the average RZR for right fielders has fluctuated between .896 and .923.Ã‚Â  Bruce has generally been average or above until this year. 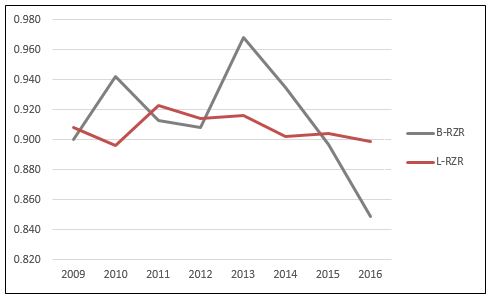 As far as UZR is concerned, the idea of RZR is taken into account in the RngR factor.Ã‚Â  Makes sense that if you are getting to fewer balls in your zone, then your range is declining, right?Ã‚Â  UZR takes that concept and expressed it as runs above or below average for right fielders.Ã‚Â  How does Bruce’s RngR look?Ã‚Â  Well, you decide. 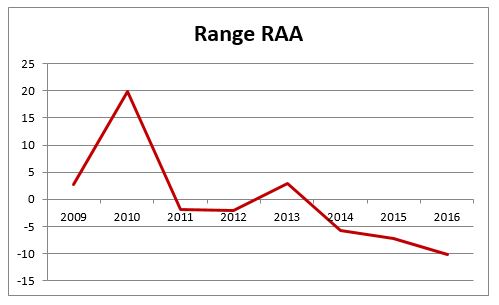 With the exception of 2010 (which looks to be a major outlier on this graph), Bruce’s range has been on a steady decline for quite awhile, with another small blip in 2013.Ã‚Â  If you’ve watched Bruce over his career, this makes sense.Ã‚Â  There were times when I marveled at the balls he caught.Ã‚Â  Now, there is very little marveling going on.

Currently at 10 runs below average, this factor is the largest factor playing into Bruce’s very poor UZR, and thus, fWAR.Ã‚Â  The chart above isn’t adjusted for time played, by the way.Ã‚Â  If Bruce were to be average from here until the end of the season, this would still be the worst defensive season of his career based on RngR.

The next factor to discuss is ErrR, or how many runs saved or destroyed by avoiding errors at a better or worse rate than other right fielders.Ã‚Â  This factor isn’t all that special since most right fielders don’t commit a ton of errors given that usually the only way to receive an error is to drop a fly ball or air mail a throw that allows a runner to advance.Ã‚Â  Since 2009, Bruce has been as low as -1.0 runs and as high as 1.4 runs.Ã‚Â  This year he’s at -0.2 runs, so right around average.Ã‚Â  No need for a graph of this.

The third and final factor that goes into UZR for outfielders is the ARM, or as mentioned above “arm runs above average”.Ã‚Â  Some folks might claim an outfielder’s arm is his most valuable asset.Ã‚Â  They’d be wrong, but some folks might say it!

The value of an outfielder’s arm manifests in two ways.Ã‚Â  First, in throwing out runners attempting to advance on the base paths, and second, in suppressing the desire of runners to take extra bases based on your arm’s reputation.

UZR takes into account how often runners advance on you, how often they decide not to try, and how often the outfielder throws the runner out.Ã‚Â  The speed and location of the ball is taken into account.Ã‚Â  For example, a bloop single that is almost caught will not allowed a runner to advance first-to-third since the runner has to hold up a bit to make sure it drops.Ã‚Â  On a play like this, the outfielder wouldn’t get any credit in his arm since it played no part in preventing the runner from advancing.Ã‚Â  UZR also takes park into account.Ã‚Â  Fenway Park, for example, has a unique left field due to the green monster.Ã‚Â  Since balls ricochet off the wall into medium left field, it’s very hard to advance first-to-third when a non-Hanley Ramirez-type outfielder is patrolling left field.Ã‚Â  As such, left fielders in Fenway Park don’t get as much credit for holding runners as a left fielder in Coors Field would.

Ok, with that out of the way, I’d like to present this posts’s final graph, showing Bruce’s ARM overlaid with how many outfield assists Bruce was credited with: 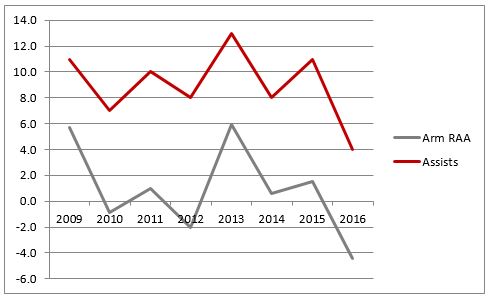 As you can see, there’s almost a perfect correlation between throwing runners out and how many runs and outfielder’s arm is credited with saving.

Assists are not scaled to games played on this graph, however.Ã‚Â  So this season, Bruce is on pace for something like 10 outfields assists (he currently has 4).Ã‚Â  Since ARM is expressed as runs above average, Bruce getting to 10 assists in 2.5 times more games won’t increase his arm’s value relative to the league, thus, it won’t move his ARM rating. Since Bruce’s ARM rating is the lowest it has ever been, we are left to conclude that Bruce is doing a worse job holding runners from advancing to third base and home.Ã‚Â  When you think about the implications or worse range (shown above), it is easy to think that perhaps Bruce not getting to balls as quickly or directly is allowing more runners to advance.Ã‚Â  I don’t have this data, unfortunately.

I have one more chart!Ã‚Â  No, I didn’t lie.Ã‚Â  Charts and graphs are different things!Ã‚Â Ã‚Â  This shows Bruce’s Inside Edge Fielding numbers since 2012.Ã‚Â  It is not available before then.Ã‚Â  If you aren’t familiar with IEF, you should be!Ã‚Â  It is very neat.Ã‚Â  Basically, each play is put into one of 6 bins based on how often fielders make plays on similarly hit balls in play.Ã‚Â  If you make the play, you get credit.Ã‚Â  If you don’t, you don’t.

Here is the graph with the first 3 bins: 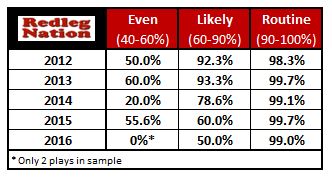 I’ve shown the Even, Likely, and Routine bins because they tell you the most about how the tendencies of fielders are changing.

As you’d expect, Bruce continues to make a high percentage of the routine plays, although he’s at a 4-year low.Ã‚Â  Where we see cause for concern is in the Likely and Even columns.Ã‚Â  Bruce’s ability to convert likely plays into outs has declined every season since 2013.Ã‚Â  After two seasons in the 90s, he’s now in the 50s and 60s.Ã‚Â  And although the sample sizes are small for Even plays, Bruce has made neither of the plays classified as “even” this season.

Jay Bruce.Ã‚Â  I love the guy.Ã‚Â  I really do.Ã‚Â  He can still hit, and will likely hit for awhile.Ã‚Â  But based on what I can see with my eyes, as well as what I can see in the numbers, I think the days of Jay being a good defender are over. I suppose I picked a poor title for this column, as I haven’t really defended Jay Bruce.

Data pulled from FanGraphs.Ã‚Â  Data provided to FanGraphs by Baseball Info Solutions, The Fielding Bible, and Inside Edge.