All astute baseball fans have noticed there is a big difference in Joey Votto’s game this year.Ã‚Â  No, I’m not talking about his sub-.230 AVG or his sub-.360 OBP.Ã‚Â  I’m talking, of course, about his strikeout rate (K%).

Votto has never had a K% at 20% or higher, with his career high being 19.5% in 2009.Ã‚Â  As of the writing of this sentence, Votto is sporting a 26.3% K%.Ã‚Â  This puts him in the same company as Khris Davis and Mark Reynolds.Ã‚Â  Unless you’re talking about power on contact, a hitter of Votto’s caliber doesn’t want to be mentioned in the same sentence as those gentlemen.

Many might think the easiest-to-blame culprit would be swinging strike rate.Ã‚Â  Whiffing at more pitches certainly correlates well to strikeouts.Ã‚Â  So how that that look for Votto? 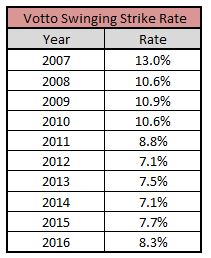 Votto’s at his highest rate since 2011, but not outlandishly so.Ã‚Â  Furthermore, Votto’s current contact rate of 78.9% is almost identical to his career contact rate of 79.0%.Ã‚Â  So, we can’t readily blame whiffs for Votto’s troubles thus far.

If you need 3 strikes to strike out and you aren’t whiffing more often, then you must be getting more unfavorable strike calls from the umpires, right?Ã‚Â  Well, maybe.

The below chart is a strike zone visualization (from the catcher’s point of view) that shows the differential between the called strike rate (cStrike%) Votto has seen this year versus the cStrike% Votto saw in the aggregate of 2013 to 2015. The dark black box represents the rule book strike zone. 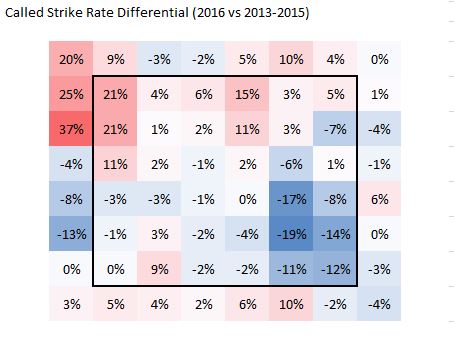 For this chart, a positive percentage indicates Votto is getting more called strikes in the zone in 2016 versus 2013-2015.Ã‚Â  The very top-left square, for example, is just out of the strike zone high-and-away to the lefty Votto.Ã‚Â  This year, that pitch has been called a strike 20% more often than in the 2013 to 2015 period.

As you can see, there is a strange thing going on with tons more strikes called high-and-away and a lot fewer strikes being called down-and-in.Ã‚Â  I don’t know why this might be (likely umpire variance), but what is the net effect?

I won’t show the math for this because it’s a bit useless to view, but the net effect to the way umpires have been calling Votto this year is about 6 strikes.Ã‚Â  That’s it.Ã‚Â  Votto has been “unlucky” to the tune of 6 additional strike calls versus what he’d expect.Ã‚Â  That could lead to no more than 6 additional strikeouts.Ã‚Â  Best case scenario, if Votto gets those calls as balls rather than strikes on a 2-strike count, it lowers his K% from 26.3% to 23.6%.Ã‚Â Ã‚Â  And remember, that’s best case scenario.Ã‚Â  If those 6 strikes occurred in PA that Votto didn’t K in, they had no effect on his K%.

The next chart shows contact rate differential between 2016 and the aggregate 2013-2015 period. 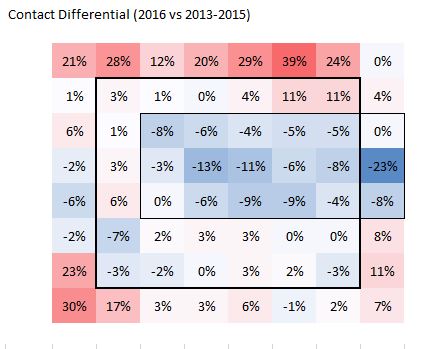 I’ve highlighted a box that could be said to represent the “middle-middle to middle-in” zones.Ã‚Â  In this crucial zone, Votto has made significantly less contact this year than in his last 3 seasons.

We already talked about swinging strike rate, though, right?Ã‚Â  So why am I bringing up contact again?Ã‚Â Ã‚Â  Well, because I want to!

If you think about the types of contact that occur in this middle-middle to middle-in zone, you are thinking line drives, homers, doubles, and generally good stuff. This is the heart of the zone!Ã‚Â  A lot of the reason for Votto’s lowered offensive numbers this year almost certainly have to do with this particular contact issue.

Notice the area of red above the zone.Ã‚Â  Votto is making a lot more contact on pitches just above the zone than ever before.Ã‚Â  So, what kind of contact do we expect from those kinds of balls?Ã‚Â  Fly balls, sometimes home runs, and a lot of foul balls.

So, here’s my assertion.Ã‚Â  Votto’s strikeout issues are a combination of two main things.

First, the umpires are calling a zone that is slightly different than what Votto has grown accustomed to in the last 3 seasons.Ã‚Â  This is likely causing him to take pitches he might normally swing at, or perhaps swing at pitches he might normally take.Ã‚Â  Essentially, this has made him become more off-balance than we’re used to seeing.Ã‚Â  Also, those 6 extra called strikes mentioned earlier might have led to an extra few strikeouts.

Second, even though Votto’s overall contact numbers are in line with his career averages, he’s making contact in different parts of the zone.Ã‚Â  More contact on pitches out of the zone means more foul balls and more strikes.Ã‚Â  Votto is putting himself into more unfavorable counts, meaning he doesn’t have to swing and miss more often to incur an increased K% as long as he’s making contact on 0- and 1-strike counts and saving the whiffs for 2-strike counts.

Is this correct?Ã‚Â  Maybe.Ã‚Â  There’s really no way to know for sure.Ã‚Â  In the absence of perfect, sortable pitch-by-pitch data and a lot of time, I think it’s a solid theory given that the normal culprits of swinging strike rate and contact rate don’t seem to tell the whole story.

Regardless, an increased K% over two months is worrisome given that K% begins to stabilize rather quickly.Ã‚Â  Based on the way Votto is approaching his at-bats, the way pitchers are pitching him, and the way umpires are calling him, this is Votto’s current reality; a 26% strikeout guy. He hasn’t been unlucky, and he probably isn’t physically declining.

This doesn’t mean he can’t make an adjustment and turn back into the 19% strikeout guy, though.Ã‚Â  That’s the beauty of baseball.Ã‚Â  Votto’s old “kill inside pitches” swing from 2010-2011 is likely still out there.Ã‚Â  He might be able to find it again.Ã‚Â  If he doesn’t get back there, however, the lessened amount of balls in play and walks will likely limit his ceiling to something closer to .280/.390/.480.Ã‚Â  Still very good numbers, but not quite what we hope for from #19.