To begin, I’d like to apologize to everyone who clicked on this link expecting some sort of in-depth statistical analysis. Ã‚Â Unfortunately, you won’t find such an analysis this week. With the holiday weekend and some sickness in the family, I didn’t have time to research anything interesting. Ã‚Â Instead, I’d like to tell you about my experiences at Monday and Tuesday’s games!

Several months ago, my step-father-in-law suggested my wife and I take little Jeter to his first baseball game this year at Coors Field. Ã‚Â I said “That’s a fantastic idea! When do the Reds come into town?” Ã‚Â Memorial Day was the perfect day for such a momentous event as a boy’s first Reds game. Ã‚Â I purchased tickets and my folks, my wife’s folks, and little Jeter were on our ways!

As soon as we walked into the stadium, the crack of the bat could be heard above the din of the concourse. Ã‚Â Cozart had homered on the game’s first pitch. Ã‚Â One for the good guys! Ã‚Â As the rest of the party made their way to our seats, I stood to watch Votto’s first at-bat. Can’t miss what I paid for! Ã‚Â That at-bat was nothing special, however.

We had field-level seats between 3rd and the foul pole – one of my favorite angles to watch a game – about 33 rows up where the mezzanine level could provide shelter from the elements. Ã‚Â I’m glad I picked these seats because we had both rain and sun during the game. Ã‚Â Weather so close to the mountains can change in a hurry.

View from our seats

Play of the game, of course, was Votto’s bases loaded double. Ã‚Â The wind during that inning was stiff, to put it conservatively. Ã‚Â The flags atop the stadium were standing at attention, with the wind blowing straight into home plate. Ã‚Â Votto drove the ball into the teeth of the gale, causing the strange flight seen mostly on golf balls. Ã‚Â The ball seemed to continue to rise, even as it was being slowed down by the wind. Ã‚Â Without wind, that ball is an easy 440 feet. Ã‚Â Votto had to settle for a 2-run double as the ball bounced over the center field fence.

The game was an absolute blast! Ã‚Â The Reds won, Adam Duvall homered twice, Votto homered, every Reds starter had a hit except for Dan Straily (who drew a walk), and little Jeter slept most of the time! 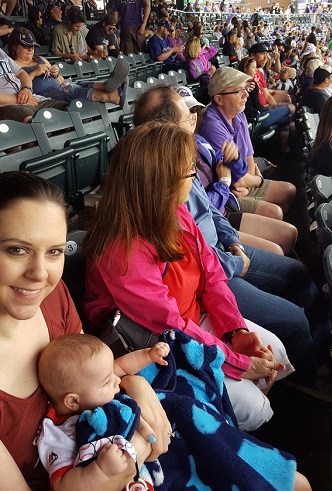 Little Jeter’s Grandpa Mark picked up a game-used ball for him,Ã‚Â as well. Ã‚Â It was a ball in the dirt thrown by Chad Bettis in the first inning to Mr. Joey Votto. Ã‚Â My son owns a ball that Joey Votto took. Ã‚Â Awesome. 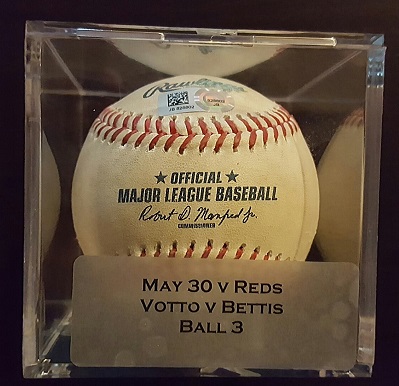 A nice first addition to a collection…

All in all, I believe this was a successful trip to Denver!

I left this game between the bottom of the 8th and the top of the 9th. Ã‚Â This means I suffered through all 17 of those Rocky Mountain runs!

I was flying solo for this game. Ã‚Â I left early and got to the field at 4:40PM, right as gates were opening up for visitor’s batting practice. Ã‚Â In all my years as a fan, this is the first time I’ve ever been to batting practice. Ã‚Â It was definitely fun! Ã‚Â I expected a ton of homers, given that I was standing in Coors Field, but Duvall and Brandon Phillips were the only two players to go deep. Votto didn’t take batting practice, which was a bummer. 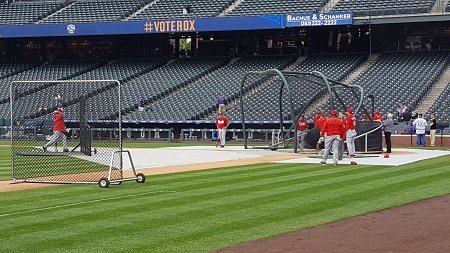 I was disappointed Phillips didn’t play in this game because he looked fantastic in batting practice. Ã‚Â He was spraying line drives all over the field and then homered to center field, about 10 rows up in the stands, on the penultimate pitch he saw. Ã‚Â On the final pitch he saw, he homered to left, about 15 rows up. Ã‚Â BP definitely still has some raw power, Coors Field or not. 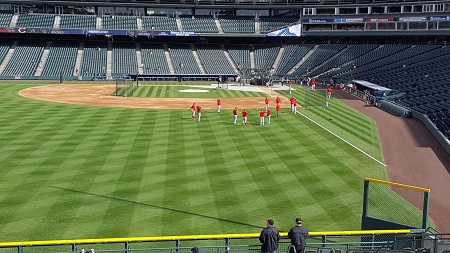 About where BP’s BP homer landed…

The game itself, for those of you who watched, started out badly. Ã‚Â Jon Moscot gave up a homer, a double, and another homer in the first 6 pitches of the game. Ã‚Â He ended up be touched forÃ‚Â 7 ER in 2 innings pitched. Ã‚Â Moscot, thankfully was OK, after being grazed in the face by a Jon Gray fastball in the top of the 3rd inning. Ã‚Â From my seat in the 9th row near 3rd base, it looked bad. Ã‚Â I was standing up for about 10 seconds while Moscot was on the ground, just long enough for someone behind me to ask me to sit down.

On my way out, I met loyal Redleg Nation reader Dwayne (or could be Duane) on the concourse near the left field foul pole. Ã‚Â  We talked for about 20 minutes about a variety of topics; what’s wrong with Votto, what should the Reds do with their minor leaguers, and should we trust Dick Williams, among other things. Ã‚Â During our talk, the score went from 11-3 to 17-4. Ã‚Â I was so mentally checked out from the first six Rockies homes that I didn’t even notice Charlie Blackmon’s homer was a grand slam until I completed my 90-minute drive home.

During our talk, we ended up on Votto’s poor batted ball luck. Ã‚Â During his at-bat, while we were discussing it, Votto hit a screaming 106mph line drive… right at the right fielder.

My new friend said he doesn’t generally post here on RLN, but hopefully he will now!

Oh, one last thing! Ã‚Â I collect baseball cards and was fortunate enough to get Mr. John Lamb to give me his John Hancock before the game. He was an extremely nice guy. Ã‚Â Made eye contact, asked how I was, and told me to “Have a good one.” Ã‚Â You too, John. You, too. Ã‚Â I was happy to see him have some success in the 3rd game of the series. 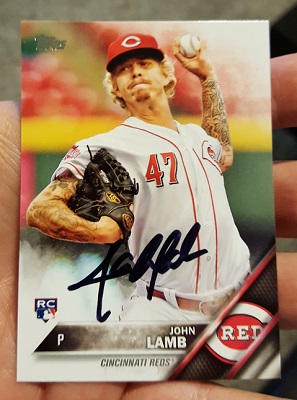 Ok, I suppose that’s enough. Ã‚Â I hope this wasn’t too boring! Ã‚Â We’ll get back into charts and numbers next week!