The Reds offense kept rolling, as they scored seven runs, and banged out 12 hits. Suarez, Cozart, and Duvall all homered for the Reds. Brandon Finnegan kept the Nationals offense in check, holding them to just one run over 6.1 innings. 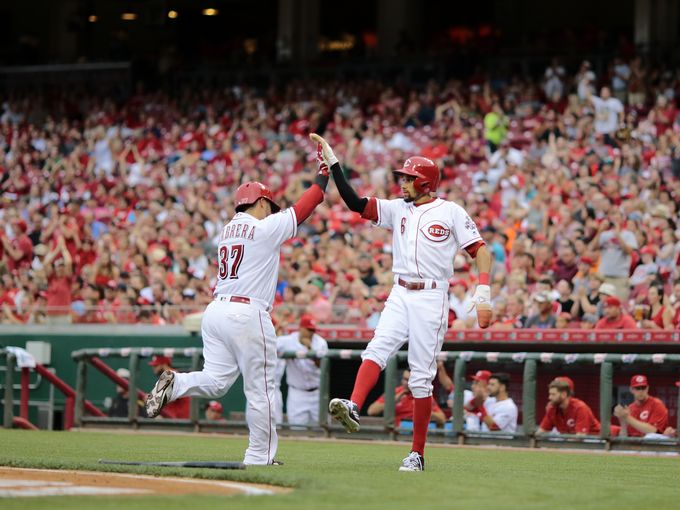 The win was the Reds third straight, which is their longest winning streak since the first week of May. The Reds also spoiled Dusty Baker’s return to Great American Ballpark. Many of the Reds holdovers from Dusty’s tenure in the Queen City were thrilled to see their old skipper again before the game. 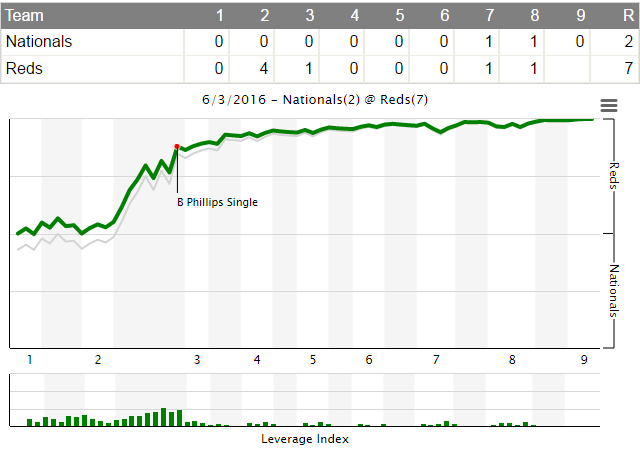 According to FangraphsÃ‚Â WPA statisticÃ‚Â (winning percentage added), the most important play of the game wasÃ‚Â Brandon Phillips 2-RBI single in the 2nd inning with 2 outs, giving the Reds a 4-0 leadÃ‚Â .Ã‚Â That play increased the Reds chances of winning by 11.4% (from 76.7% to 88.0%).

The peripheral numbers for Finnegan weren’t great tonight (you don’t want to walk more batters than you strikeout), but he did a nice job keeping the Nationals hitters off-balance. The cause for concern with Finnegan is his strikeouts being down all season. He currently sits at 6.29 K/9 (was projected for 8.27). Pitchers can be successful without striking out batters, but they have to limit walks and home runs. Finnegan has 4.41 BB/9 (MLB average is 3.02), and 1.30 HR/9 (MLB average is 1.13). There is certainly a lot to like about Finnegan, but he also has a way to go.

Eugenio SuarezÃ‚Â hit his 13th home run of the season, and had a total of 3 hits on the night. 13 home runs by June 3rd is pretty impressive. Obviously we would like to see that OBP a little higher, but there is a lot of potential in Mr. Suarez.

Zack CozartÃ‚Â hit his 8th home run of the season, and had two hits on the night. Cozart is now hitting .310/.337/.540. You can’t say enough good things about the player Zack Cozart has turned out to be. I’m starting to believe Cozart is a top 10 MLB SS.

Joey VottoÃ‚Â had a double. Don’t look now but Joey Votto’s OPS has climbed to .754. The average OPS in the MLB this season is .729. I don’t think Votto will make it all back to his 1.000 OPS of last season, but I think he will get a lot closer than some think.

Brandon PhillipsÃ‚Â had a 2-RBI single in the second inning. Phillips now has a 7-game hit streak.

J.C. RamirezÃ‚Â pitched a perfect 9th inning, striking out the side!

PoorÃ‚Â Jay BruceÃ‚Â was the only Reds starter (minus Finnegan) not to get a hit.

Today was the first timeÃ‚Â Dusty BakerÃ‚Â returned to GABP since being fired in 2013. Several of the Reds media members, broadcasters, and others were gushing over Dusty. Sure, Dusty seemed liked a nice guy and was probably helpful in the development of guys like Brandon Phillips.

……..but, let’s not forget just how many terrible decisions Dusty Baker made. This is the same guy that didn’t pitch Aroldis Chapman in the wild-card game. He started Todd Frazier once in 5 games in the NLDS (Frazier had a .829 OPS in 2012). Baker let Mat Latos completely melt-down in Game 5. Baker also consistently batted Stubbs and Cozart (the two guys with literally the worst OBP in the NL) first and second. Baker buried Devin Mesoraco on his bench. Baker consistently made terrible bullpen moves. So please, stop gushing over Dusty Baker. The Reds lack of success post-Dusty has nothing to do with not having him as the skipper.

You see why the Nationals are high on their recently called up top prospect Trea Turner.Ã‚Â He was 3 for 3 with a walk, and showed off his incredible speed. This kid has a bright future.

Fun fact about Adam Duvall. So, Duvall has a .297 OBP and .607 SLG. That is a pretty weird combination. Usually players who SLG that well get on base more. I did a baseball reference play index search and found that there has NEVER been a player in the history of baseball (database goes back to 1914) who had a OBP less than .300, and a SLG of .600+ in the same season. The closest player that I could find was Matt Williams in 1994. He had a .313 OBP and .607 SLG that year.