For the rest of the summer, I will be spending my time in Europe,Ã‚Â which thankfully limits my exposure to the Reds bullpen. However, by nature of the transitive property, my exposure to my other true love–college baseball, specifically Vanderbilt college baseball–is also greatly diminished. But this column is not meant to bemoan my personal hardships.

As we all know, the Reds have the wonderful fortune of the second pick in the 2016 draft (and the 35th overall pick as part of the competitive balance round A). While it is entirely likely the Reds will take a high schooler with that pick (you know, upside and all that), it is possible a seasoned college man will be the choice. Of all the first round picks last year (42 in total), 20 were college players and 14 of those were showcased in the tournament, including all of the top three picks.

Despite none of the Reds projected picks (Jason Groome, Nick Senzel, Kyle Lewis) actually playing in the tourney, that shouldn’t limit any advanced fan scouting. The Reds could pull a fast one on us…or maybe not, but there is always the 35th pick. With that said, here’s a bit of primer for the faces to watch in the NCAA DI Baseball Championship starting this afternoon. Who knows, maybe one day one will be the face of the Reds?* 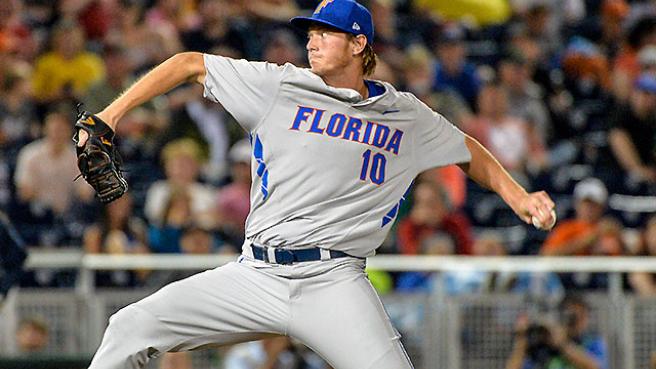 6-7, 230 pounds and dirty with theÃ‚Â slider, A.J. Puk looks a lot like Pirates super-prospect Tyler Glasnow save one small detail: Puk’s a southpaw. Yet while many consider Puk to be the top prospect in this draft (and is on the Phillies short list), he’s not the clear cut number one.

That’s not because there’s anything particularly wrong with Puk–he did record a 2.88 ERA in 65.2 innings, striking out 90 and drawing comparisons to Chris Sale–but any hard throwing hurler has his injury risk. Also, Major League teams tend to prefer dreaming of what high school studs could become instead of what college stars are. So, the Phillies could very easily go for a high school bat and let Puk fall to the Reds at #2.

In his last start of the season against LSU, Puk went 7.1 innings, giving up two earned runs and striking out seven but taking a no decision. According to the Enquirer’s C. Trent Rosecrans, Puk touched 95 mph with his fastball as late as the eighth inning.

WhileÃ‚Â Puk would certainly be the best available if on the board, taking him could be a knee-jerk reaction to the club’s recent pitching injury troubles. The Reds dreadfully need bats to bolster the aging lineup, and there’s no shortage of young arms in the system.

It’s no secret the Reds need bats–heck, with Jay Bruce, Zack Cozart, and Adam Duvall all potentially leaving town, the Reds will soon be hard-pressed to get a ball past the dirt. Enter Corey Ray: the junior Louisville right fielder who currently claims a .971 OPS. Ray also leads the Cardinals in home runs with 15 (nearly doubling the next closest mark) and in steals with 39. His sheer athleticism gives him the potential to clean up his defense a bit, but overall, Ray is a solid four-tool prospect with room to improve.

Just recently, Ray was named a semifinalist for the Golden Spikes award, the top honor in college baseball. Prior to the season, there were concerns about Ray’s struggles with making contact, but after posting a respectable 12.8% strikeout rate and 11.7% walk rate, Ray might just be the answer the Reds need in the outfield.

Imagine by mid-2017, the Reds outfield is comprised ofÃ‚Â Jesse Winker, Billy Hamilton, and Corey Ray. Not awe-inspiring, but not too shabby either. Ray has drawn comparisons to Curtis Granderson, which I believe overstates his power, but a Starling Marte with more plate discipline comp could make sense.

Potentially unrelated but likely super related, Corey Ray’s Twitter handle–@FutureIs_Bright–proves that if the Reds draft him their future too will become bright.

Buddy Reed (OF, University of Florida) 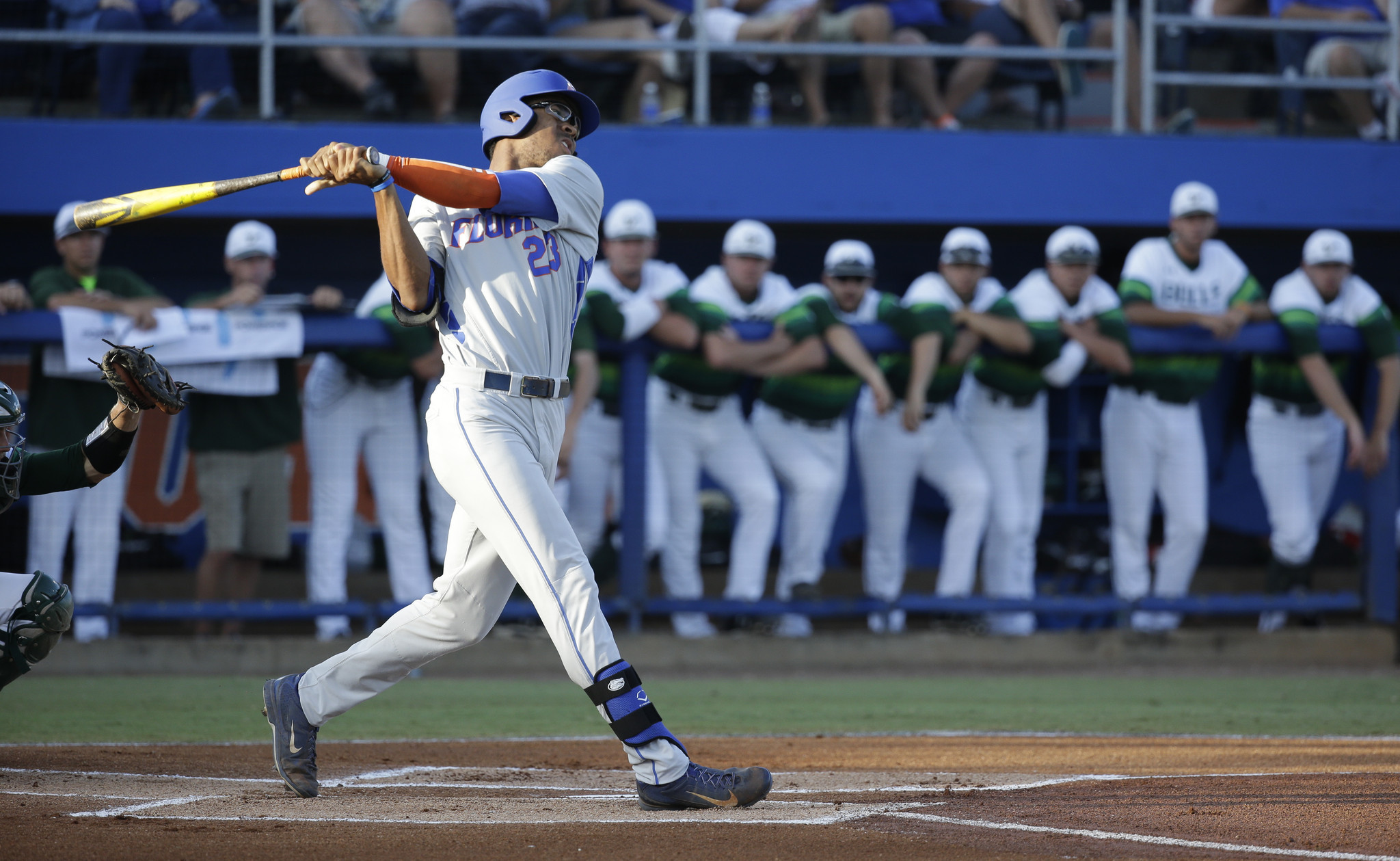 Before the season, Florida outfielder Buddy Reed looked like an absolute lock to be a top ten draft pick. Now, Baseball Prospectus hasn’t even included him in the top 34 picks of their most recent mock. What happened?

For one, Reed only hit .259/.361/.410, not bad numbers but not impressive when playing for the best in the country. Also, Reed has drawn direct comparisons to Ray all year long, a battle he’s going to lose every time hitting as he did. Having his calling card be his superior defense hurts Reed immensely when compared to the other ridiculous numbers put up by college hitters.

What helps Reed in that department is his speed and switch-hitting ability–sound familiar? MLB Pipeline gave a succinct summary of Reed’s hitting potential:

He does tend to make contact from both sides of the plate, but his setup and approach are inconsistent. Reed has strength, and he should grow into more, though his lack of extenston from the left side could keep him from showing any power that way. A tendency to be tentative at the plate has plagued him, but he was swinging more aggressively as the spring progressed, showing the ability drive the ball more effectively.

Refining of Reed’s approach should help him reach his offensive ceiling.

At the end of the day, the Maryland native and USA Collegiate National team player is still a four plus-tool player, but that fifth missing link is his bat. After this season, it seems that Buddy Reed’s best comp might just be a rich man’s version of the Reds current center fielder. I’m leaving Reed as a potential #2 overall pick because his ceiling is so high, but if the Reds end up with him, it’ll be from the 35th pick, not the second. 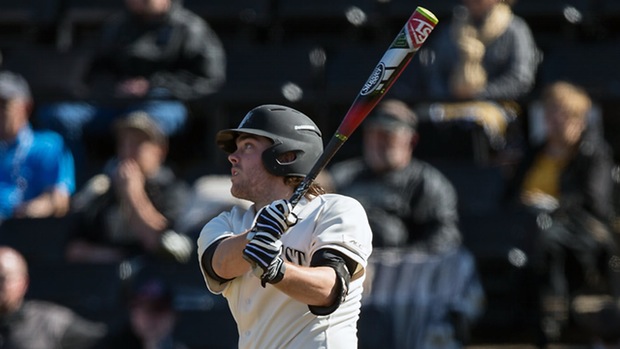 All three of the following names are unlikely to fall to the Reds at 35, butÃ‚Â of the three, Will Craig is the most likely. Wake Forest’s burly first baseman destroyed the ball this season, mashing to the tune of .392/.537/.766. He also–actually, just read that line again. Craig had an OPS of 1.303. He got on base more than half of his at-bats. He made more than a handful of pitchers cry themselves to sleep while their roommate could do nothing but sit there quiet and still.

Craig’s numbers this season have been so ridiculous that he prompted one blog to run an article headlined: “Will Craig is making a mockery of college baseball.” From the piece, which was written in early April:

Now Craig has done the baseball equivalent of breaking Madden. Or he sold his soul. Or maybe he ordered an officially licensed Jobu doll from MLB.com and sacrificed a whole semi full of live chickens. Whatever he’s done, it’s working to the tune of a .475 batting average. But Craig isn’t sacrificing any power for the sake of average; he leads the NCAA with a .950 slugging percentage. His SLG% alone is higher than any N.C. State player’s OPS! The big donkey’s driven in 41 runs in 24 games (he missed seven due to injury). He’s got a .573 OB% and, despite being a power guy, has walked more times (15) than he’s struck out (12).

All that is well and good, but hone in on that last line. “Has walked more times than he’s struck out…” Craig, breaking the typical power hitter mold, has found a way to appease every type of fan. Long balls for the old folks, walks for the youngsters.

Given all of that, itÃ‚Â just doesn’t stand to reason why the human incarnation of Techno Bowl Bo Jackson would slide to the end of the first round. Well, most scouts don’t see Craig adding anything to his game. Even though he’s a complete hitter right now, this is his ceiling. Somehow a 1.300 OPS ceiling is a bad thing. (Even if you adjust by taking half of an average OPS from Craig’s number to mirror the advanced Major League pitching, he’s still sits above .900.)

In truth, Craig’s best comp probably comes in Boston rookie Travis Shaw with the floor of former Boston rookie Will Middlebrooks. Yet, both struck out far more than Craig does so maybe we’ve finally found the unicorn.

Hopefully, College Station Regional three-seed Wake Forest can stick around long enough for all of us to get a good look at Craig. If the Reds can somehow nab him and convince him to play third, the 2017 team starts to look real good.

Quick story: I played against Bryan Reynolds my junior year of high school. I have absolutely no recollection of how he played in that game nor those it matter, but he did sport a rather disgusting mustache, which I do remember.Ã‚Â Reynolds, like Craig, is unlikely to fall down to the Reds at 35, but if he did and if they don’t take an outfielder with the first pick, he could be a strong pick-up. 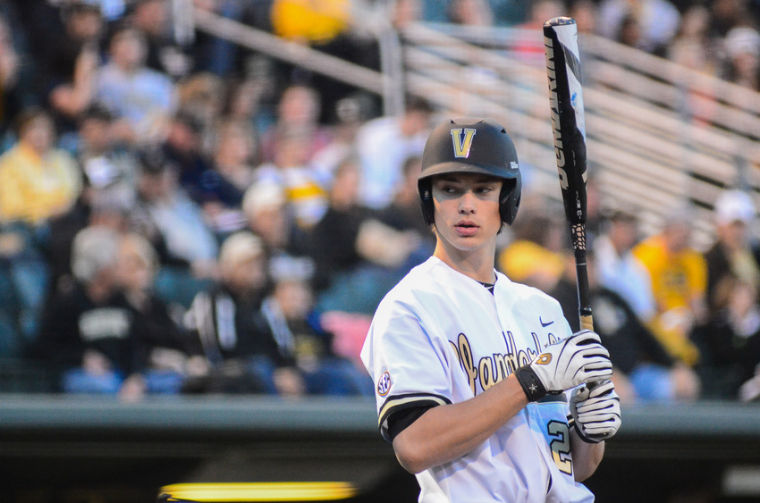 Reynolds is the definition of a vanilla player, lacking the one definitive tool to give his game his flavor. That assessment sounds much worse than it is: Reynolds just does everything well. He hits for contact, has some pop, runs a bit better than most, and can cover the outfield with ease. His arm is a bit weak to stay in center, but if that’s his only knock, it’s not a reason to pass.

On the season, Reynolds is hitting .335/.462/.615, championing another very good Vanderbilt team. Again, the pop is there as he has lead the team in homers with 13 and doubles with 16. Reynolds is a bit of a Joey Votto-like hitter, in that he will walk quite a bit but with it comes his fair share of strikeouts.

He’s a safe hitter, one that will rise through the ranks quickly and maybe make an All-Star game or two, but don’t expect much more than that.

Vanderbilt plays Xavier today at 7 CST in the Nashville Regional. 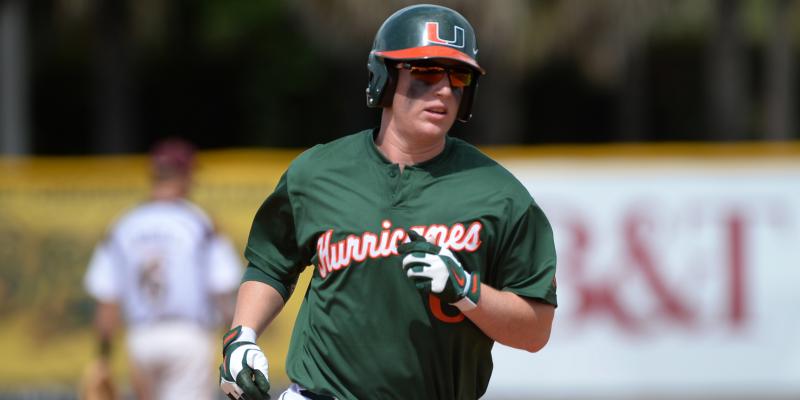 The Reds have actually picked Zack Collins before, back in 2013, and should do so again especially considering the uncertainty around Devin Mesoraco’s future career. Granted, the Reds haven’t had too much luck with Miami catchers in the past, but Collins could be the exception.

On the year, Collins hit .364/.540/.630, while mashing 12 homers. Long been billed an offensive catcher, Collins has had problems behind the plate, hence why he may just fall to the Reds at 35. But the bat is there, and that’s all the Reds really need at this point. Collins is another guy who walks more than he strikes out and is extremely durable evidenced by his starting 54 of Miami’s 56 games.

Along with Ray, Collins was named a Golden Spikes semifinalist, proving his worth to the number three overall ranked Miami Hurricanes. Ultimately, if he’s available, the Reds should pick up Collins. Mesoraco’s career seems to be done or at least continuing in a severely diminished capacity, and Collins could be up in no time to take the reins.

Miami plays Stetson today at 6 CST in the Miami Regional.