It doesn’t seem like all that long ago when Tony Cingrani was regarded as a top-five prospect in the Reds organization.

The 2011 third-round draft pick moved rapidly through the Reds’ farm system, making his way to the big leagues at the end of the 2012 season. In 2013, his first fullÃ‚Â year, it looked like the left-hander would live up to the lofty expectations baseball experts had for him. Appearing in 23 games (18 starts), he posted a sub-three ERA, struck outÃ‚Â hitters at an elite rate (28.6 percent)Ã‚Â and amassed 1.5 fWAR.

But since then, nothing has been quite the same for the former Rice University standout.

Expected to be a key cog in the starting rotation for years to come, CingraniÃ‚Â pitched just 63 1/3 largely ineffective innings in 2014, and ended up missing mostÃ‚Â of the seasonÃ‚Â with tendinitis in his throwing shoulder. Prior to being shut down, he saw his strikeouts decrease by nearly two per nine innings. What was more alarming (and a sign of things to come) was his walk rate, which jumped from 10.2 to 12.5Ã‚Â percent.

Going into 2015, he looked to be a favorite to land back in the rotation after Mat Latos and Alfredo Simon were traded in the offseason, but it was announced in spring training that he’d be heading to the bullpen. At the time, the move seemed to suit him. He had served as the closer for Rice during his college days and his lack of secondary pitches wouldn’t be as much of a liability in short, one-inning stints of relief.

It hasn’t gone quite as planned, however.

While additional arm troubles didn’t help his cause,Ã‚Â Cingrani’sÃ‚Â effectiveness largely continued to be hindered by control that got even more erratic. His walk rate climbed even higher toÃ‚Â 16.5 percent, despite seeing his strikeout rate creepÃ‚Â closer to itsÃ‚Â 2013 level (25.2 K%). As a result, he posted a 5.67 ERA and 4.48 FIP in 33 1/3 innings and wound up spending a considerable portion of the season in Triple-A Louisville.

It’s been the same song and dance for the southpaw this season, and this time poor arm health can’t be used asÃ‚Â an excuse for his performance. In 22 1/3 innings, he’s struck out 24 batters (24.2 K%), but has walked 16 (16.2 BB%). Of his 25 appearances, only 11 have gone without a base on balls being issued. Cingrani’s ERA of 4.43 isn’t exactly pretty, but ERA estimators are even more unkind to him, with his FIP and xFIP sitting above five, due mostly to the large amount of free passes he’s handing out.

Cingrani has been serving as the team’s closer recently, but his inconsistency could keep him from holding down the job for much longer, especially since Ross Ohlendorf has been settling into a groove in recent outings.

What makes it frustrating for everyone involved is that the talent for Cingrani hasn’t gone anywhere. He still strikes hitters out at an above-average clip,Ã‚Â opponents are hitting just .222 against him and he’s holding opposing hitters to the lowest line-drive rate of his career (14.5 percent).Ã‚Â He has even seen his average fastball velocity bump up to 93.3 mph — 1.5 mph higher than his career average.

But the lack of command lingers for the 26-year-old, and keeps him from reaching his full potential. Of pitchers with at least 20 innings pitched, only the Royals’ Kris Medlen has a higher walk rate than Cingrani. (Of note: Blake Wood is third on this list.)

While Cingrani is only throwing his slider for a strike 50 percent of the time, it’s actually been a more effective pitch this year in terms of getting batters to swing at it outside the strike zone. His slider’s O-Swing% currently sits at 33.9 percent, which is the highest rate he’s ever managed.

The fastball is a different story. Hitters simply aren’t biting on it outside the strike zone like they used to, as he currently has a career low 19.7 O-Swing% on the pitch. A lot of that could be related to the simple fact that the word is out on Cingrani’s shoddy control: teams know he struggles to throw strikes and are more patient when facing him.

When trying to determine a cause for Cingrani’s ills, one interesting thing to look at is his release points over the last few years. His vertical release point has gotten lowerÃ‚Â every year, as he’s gradually started throwing the ballÃ‚Â at more of a sidearm angle. 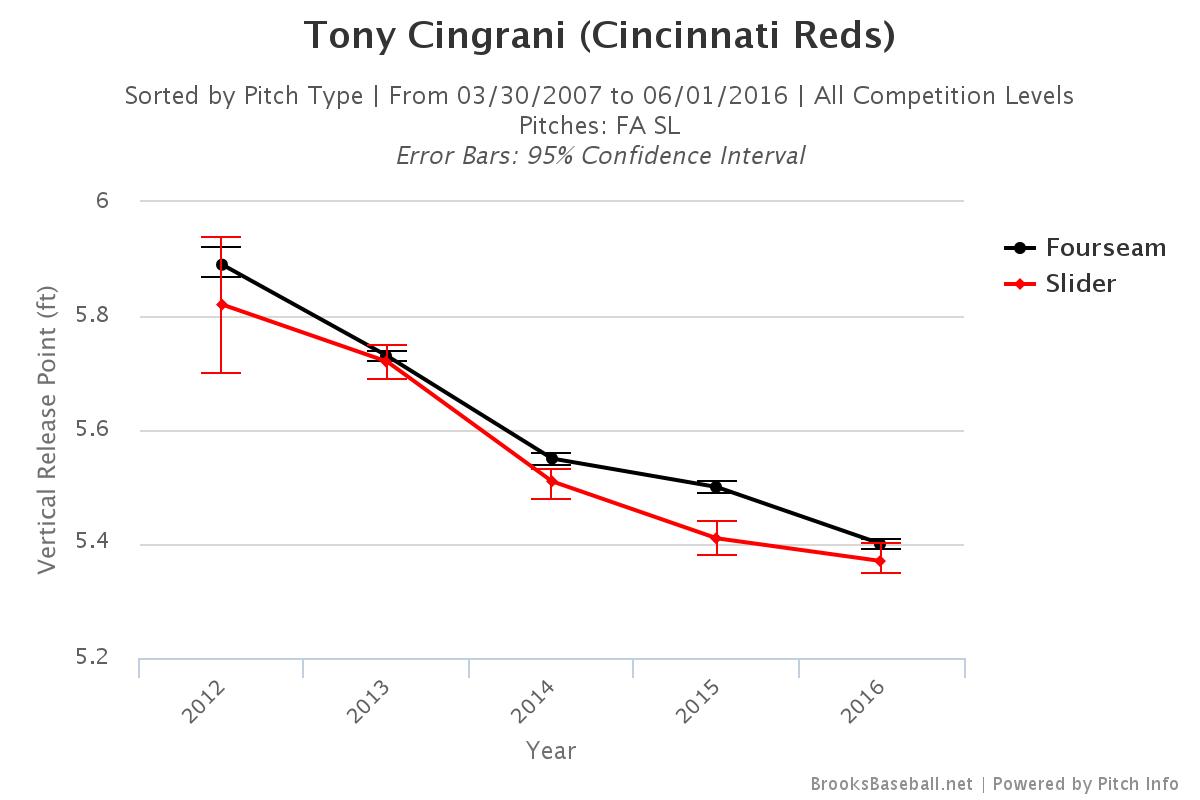 It’s hard to tell just how much of an effect this has had, but there does seem to be some trend here. Cingrani’s control has gotten worse each year as hisÃ‚Â release point has gone down.

His horizontal release points have also been in flux every year. 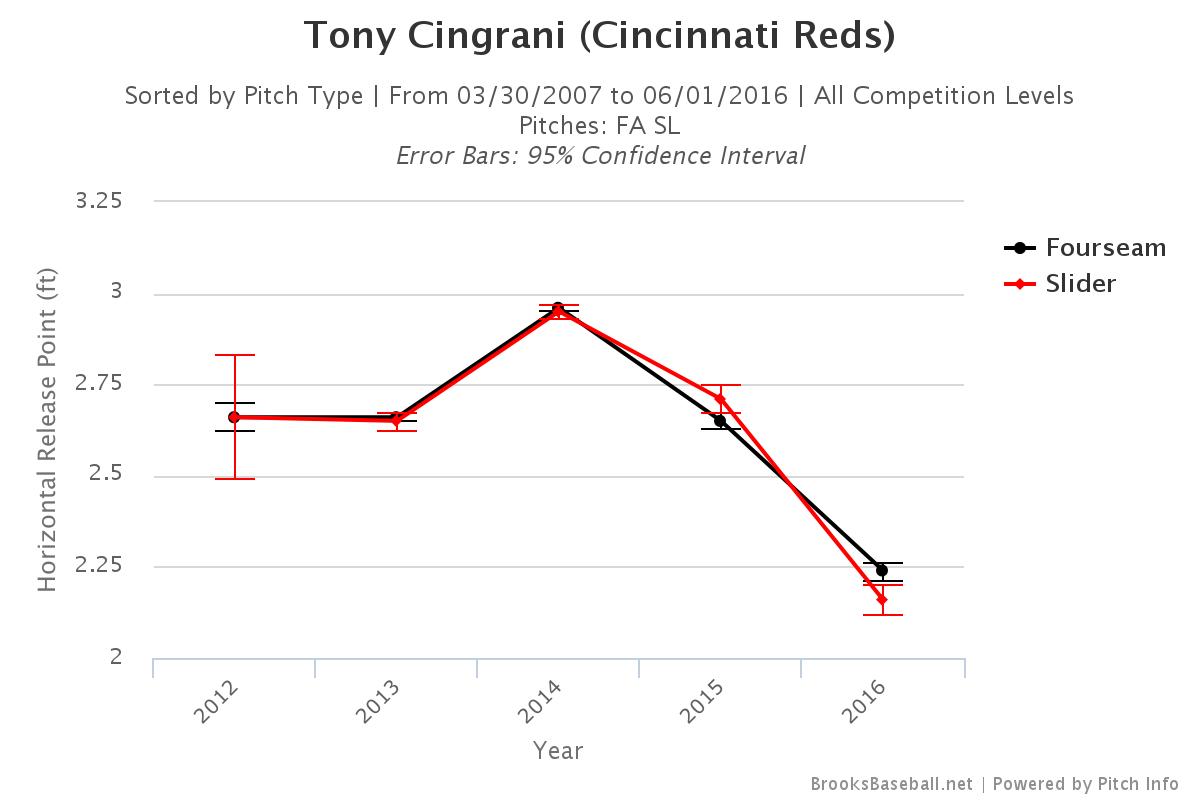 It’s tough to make any definitive conclusions from this information, but it seems plausible that not being able to find consistent mechanicsÃ‚Â from year to year, due to injuries or other reasons, could contributing to his command problems.

Whatever the case may be, Cingrani is going to have to get a better feel of his pitches and the strike zone. He’s always been a pitcher who walks a good amount of hitters, but his walk rates have skyrocketed in the last three seasons. For most other pitchers, their other numbers would be horrendous, but Cingrani’s quality stuff and high strikeout rate keep his numbers from getting too inflated. If he can cut down on the free passes, the Reds could have a dominant reliever on their hands. Right now, though, inconsistency is keeping him from reaching his ceiling.